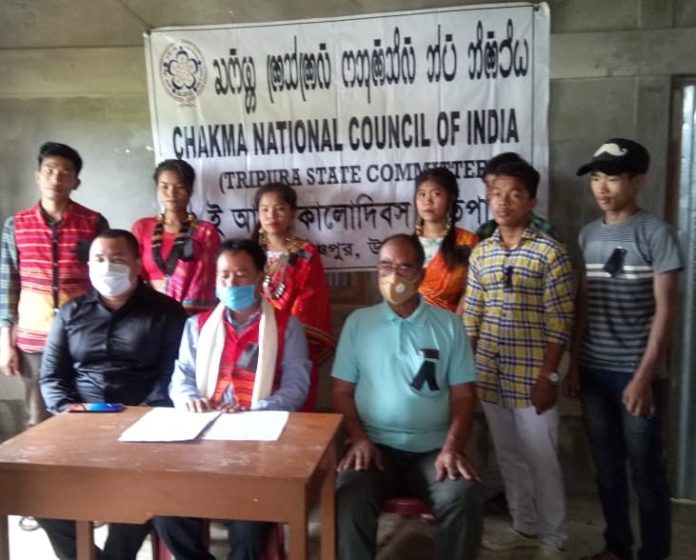 Hill Voice, 17 August 2020, Tripura: The Chakma National Council of India (CNCI) today observed ‘Black Day’ in protest against inclusion Chittagong Hill Tract (CHT) in East Pakistan during the Partition and Independence of India in 1947, They claimed that CHT is an ‘integral part’ of India and demanded justice from the International Court of Justice for the ‘historic injustice’ purportedly meted out to them.

The protests were held at Kanchanpur, Pecharthal, Manu, Chowmanu, Gandacherra, Karbook, Silachari, Agartala and other locations of the state while maintaining social distancing in view of the COVID-19 situation.

“We are loyal to India. We wanted to merge with India at the times of partition. All Chakmas and the rest of other Jumma people are still ready to merge with India. Hence, our community is still subjected to oppression continuously. Different security personnel keep disturbing, oppressing them.”

“Land grabbing continues at an even higher pace at the hands of settlers or plains people,” he claimed.

Aniruddha Chakma added that while Bangladesh government extended shelter to Rohingya refugees in the country, they are trying to grab land in the CHT now as well, adding to the woes of Chakmas. “The only solution to these ills is inclusion of CHT in India,” the Chakma leader stated.

At the time of Independence, 98 per cent non-Muslims, a majority of Buddhists used to live in the CHT. The CHT was supposed to be clubbed with India. Chakma leader Sneha Kumar Chakma hoisted the Indian national flag in the CHT on August 15, 1947, and Chakmas observed the Independence Day with rest of Indians, only to find their fate was tied with East Pakistan.

While a large number of people from CHT had then expressed desire to become Indian citizens, a discussion between Indian Prime Minister Pandit Jawaharlal Nehru, Defense Minister Sardar Vallabhbhai Patel, Pakistan Prime Minister Liyaqat Ali Khan and others over recommendations of Radcliffe boundary commissions ended in leaving CHT with East Pakistan, Aniruddha Chakma explained, adding that the ‘historic injustice’ has been meted out to them ever since.

The CHT is traditionally inhabited by at least 11 indigenous ethnic minorities including Chakma, Marma, Tripura, Chak, Mro, Khumi, Khyang, Lushai, Bawm, Pangkho and Chak. It covers approximately 5,138 sq miles and is bounded on the north by Tripura, Arakan Hills of Myanmar on the south, Lushai Hills of Mizoram and Arakan Hills of Myanmar on the east and by Chittagong District on the west.

About 98.5 per cent of CHT was inhabited by Buddhist, Hindu communities and Christian at the time of independence but CHT was still declared Pak territory by the Boundary Commission led by Sir Cyril Radcliffe.

Raising allegations of ethnic persecution, Chakmas from CHT sought refuge in Indian territory in several phases since their inclusion in East Pakistan. Around 40 thousand Chakmas, who were uprooted due to construction of Kaptai Dam in 1860s, were relocated to Arunachal Pradesh. Later, over 50 thousand of the Jumma people were sheltered in different relief camps in Tripura and Mizoram in 1986. The last group of Jumma refugees sought asylum in Tripura in 2013. They were later sent back.