I am a student. My identity is determined by the Tanchangya language. When I was a kid, playing games with my friends in my own village, a group of army would come to our village every week or month (almost often) and with chocolates or something else, ask us where the Shanti Bahini members were. At that time, I did not understand anything. When I left the village to study in Rangamati town, my parents and relatives often advised me not to get involved in politics, not to associate with political friends.

In fact, should I not come in contact at all with those who are currently involved in student politics? But I have tried to get in touch with those who do student politics (Pahari Chhatra Parishad) despite ignoring the advice of my parents. When I went home from Rangamati, I had to cross 2-3 army and BGB camps. Even then I could not understand why so many camps were actually set up in the hilly areas. Then one day I left Rangamati for Chittagong to visit my cousin’s house. But from there I realized the difference between the system of governance in the Chittagong Hill Tracts (CHT) and the system of governance in the plains.

The question arises in me, why there is so much variation in governance. Those who live in the plains are human beings and we who live in the hills are also human beings of the same blood and flesh. Then why so much inequality, why so much discrepancy. I don’t know if the present Jumma student society is still facing this question. But I think the current student society should face all these questions.

It is a matter of regret why we are seen in such a narrow sense. I have my own identity, culture and language. One of the key elements of a nation’s survival is its language. But today there is an attempt to take away and distort my mother tongue by cultural aggression. Attempts are being made to deprive me of my identity. You see, present India and Pakistan were divided in 1947 on the basis of two-nation theory. Then a separate state called Pakistan was born. But the state was again divided into two parts. One is East Pakistan which is now independent Bangladesh and the other is West Pakistan which is now Pakistan.

East Pakistan and West Pakistan were the two Muslim-majority regions. After all, what caused the conflict developed between the two of them? The answer was that most of the people of East Pakistan spoke Bengali and the people of West Pakistan spoke Urdu. The Bengali-speaking people of East Pakistan did not accept the motion while the Pakistani government announced Urdu as the state language. That is why East Pakistani people started the language movement in 1952. At that time, police fired upon the protesters indiscriminately. But the protesters did not stop there. They led the movement in the midst of oppression, torture and sacrifice, and gained independence on 16 December 1972 with a victory.

At present an independent state called Bangladesh has been established in exchange of a lot of oppression, torture and sacrifice. And the people of that country, that is, the rulers of the Bengali people, are today denying the rights of mother tongue of more than 54 other nations in Bangladesh.

Today’s Jumma student-youth society should think about all these questions. Those who are elders, whether they are thinking about the CHT issue? How do they think? Are those younger or older than me thinking about the difficult realities and complexities that exist in the CHT? Are they actually realizing the problem of CHT?

The CHT Accord was signed on December 2, 1997 with the aim to resolve the political problem of the CHT through political and peaceful means. The Accord was signed by Jyotirindra Bodhipriya Larma alias Santu Larma, President of Parbatya Chattagra Jana Samhati Samiti, on behalf of the residents of the CHT and Abul Hasanat Abdullah, Convener of National Committee on CHT Affairs on behalf of the Government of the People’s Republic of Bangladesh.

The Jumma people considered it as a charter of liberation, in which the joys and sorrows of the Jumma people are intertwined. Today 23 years have passed after signing the Accord, but the rights of the Jumma people as well as the permanent residents of the CHT have been remained completely neglected. On the contrary, they are being subjected to various forms of oppression, repression, rape and murder after rape of women, land grabbing and eviction. The temporary army camp is being re-established on the land from where camps were withdrawn. Incidents of regular harassment upon Jumma people by the military are on the rise day by day.

I am now 18 years old. The Accord passed long 23 years. This Accord is older than me. But at this time, if the Accord were implemented, I am supposed to enjoy the benefits and to get the rights enshrined in the Accord. But the political, administrative and economic powers including the basic subjects and functions such as land and land management, law and order, general administration, police, forest and environment, etc. have not yet been transferred to the three Hill District Councils and CHT Regional Council. As a result, the special governance system in the CHT with the CHT Regional Council and three Hill District Councils, has not been introduced properly even today. So, I am still far away from the benefits and rights enshrined in the Accord.

Although the CHT Accord was signed, the government has not come up to ensure the safety and security of the Jumma people by granting them rights as per the agreement. Where I am supposed to live in the delightful and safe atmosphere in this hilly homeland, I have to go to the procession today. Leaving the reading table, I have to shout the slogan in the hot sun ‘Return our land rights immediately, must be given’, ‘Implement the CHT Accord in full, must be done’. I am compelled to do so as because I am not safe in this homeland. Today, as a general student, the right that I was supposed to get is being taken away from me and is being deprived of the state constitution. So how can I, as a disenfranchised student, think that those who cultivate the simple Jum (shifting cultivation) in the hills here with full security of lives and properties and also live with their own culture and distinct characteristics have their own rights.

Apparently, the Accord has passed 23 years long. But the fate of the Jumma people has not changed in a long time. I am far away from the right that was supposed to have attached with me. But now it is seen that as a result of the government not implementing the basic provisions of the Accord, various evil forces such as Jumma brokers, Jumma self-interested groups, Jumma political brokers, reactionary and anti-Accord forces and radical Islamic groups are emerging. They are carrying out one after another conspiracy to sabotage the process of implementation of the CHT Accord. They are nakedly violating the provisions of the Accord. As a result, extreme devastation is coming down on the lives of Jumma people.

The coronavirus has spread around the world following the recent outbreak of the virus in Wuhan, China. The world today became speechless, silent and shocked. Bangladesh is not left out from this pandemic. The whole world is locked down today to prevent the spread of the virus. However, by taking the advantage of lockdown, military operations, searches and arrests are going on in every corner of the CHT. It is noticed that the troops are entering the village breaking the gate of lockdown. The intensified work is underway to reinstated the temporary army camps which were withdrawn soon after the Accord. In this way, the common people are fearing new conflicts and violence in the CHT.

If the CHT Accord had been implemented, there would not have been more than four hundred temporary camps in the CHT till now. There would not have been de facto military rule and military supremacy like ‘Operation Uttoron’ (Operation Upliftment) in the CHT. According to the CHT Accord, there were army in the six permanent cantonments in the CHT, who are supposed to provide assistance to the civil administration under the command of the CHT Regional Council during disasters. It can be said that then a democratic system of governance was formed in the region. There would be no army oppression and deprivation.

The ruling class of the country should learn from history. The late great leader Manabendra Narayan Larma said, “A nation that does not know how to fight for its rights has no right to survive.” As the way, the Bengali nation could not be suppressed by any force for their language in 1952 and independence in 1971, similarly, neither can any evil force suppress the movement and struggle for the preservation of our language and national existence.

Jumma students living in different parts of the CHT should think a little about this, why are we being persecuted? Why are there so many brutal rapes and killing after rapes in the CHT? Why do the Bengali settlers carry out violence and killings on us? Why communal attacks take place? Why take away our land? Why did our house burn down? The late great leader Manabendra Narayan Larma has shown the language of protest and the way of liberation, who is the forerunner of the national awakening of the Jumma nation, the absolute friend of the oppressed-tortured-exploited and rights-loving people.

The ruling class of the country is conspiring in various ways to establish the Jumma inhabited region of ​​CHT as an Islamic region. They are conspiring to make the whole region Bengalized. Attempts are being made to destroy the unique Jumma culture too. The Jumma people are facing a crisis of existence today. So, we have to fight unitedly for the realization of those political, economic, social, cultural and land rights.

Since the ruling class is not democratic and is carrying out repression in a fascist manner, we should also choose the undemocratic path for achieving rights to self-determination. In that case we have to jump into a greater movement. At the present time, those who are student and youth should ignite the movement for the full implementation of the CHT Accord. Let us not hesitate, let us commit ourselves to join the do-or-die movement for the realization of our just rights.

The CHT problem is a political and national problem. The way the previous regimes had failed to solve this political problem economically and militarily, similarly, the conspiracy of the present Awami League government to solve the CHT problems by continuing the military rule called ‘Operation Uttoron’ and so-called ‘floating in the tide of development’ is bound to fail. Therefore, the government should solve the CHT problem political and peaceful means by implementing the CHT Accord in letter and spirit without delay.

In 1998, UNESCO awarded Prime Minister Sheikh Hasina the UNESCO ‘Félix Houphouët-Boigny’ Peace Prize for her initiative in finding a peaceful solution to the CHT problem through the signing of the CHT Accord. In 2009, the Government of India awarded the Indira Gandhi Peace Prize to Prime Minister Sheikh Hasina for her contribution to peace by concluding the CHT Peace Accord, among others. Neither UNESCO nor the Indian government can end its responsibility with only providing the Peace Prize. If the Accord for which they have awarded Sheikh Hasina such a big international award is not implemented and peace is not ensured, then awarding such a big honor will become meaningless and showy. 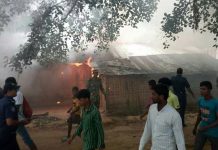