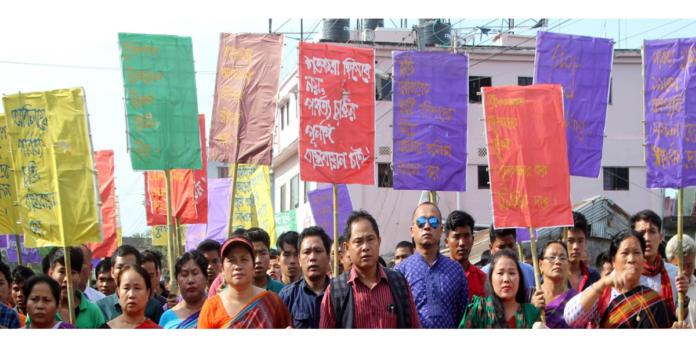 It has been 23 years since the signing of the Chittagong Hill Tracts (CHT) Accord. On this day, on 2 December 1997, the Government of Bangladesh and the Parbatya Chattagram Jana Samhati Samiti (PCJSS) signed the agreement to resolve the CHT problem through political and peaceful means. Although some clauses and sub-clauses of the CHT Accord have been implemented in the last 23 years, but two-thirds clauses are still unimplemented. In particular, the core issues of the Accord are either completely unrealized or have been partially implemented with defects. As a result, the opportunity for a political and peaceful solution to the CHT problem is being squandered today. At present, the process of implementation of the Accord is totally stopped.

Although the Awami League government, which signed the CHT Accord, has been in power for 12 consecutive years, it has not taken any effective steps and initiatives to implement the non-implementation fundamental issues of the Accord. Despite retaining two-thirds of the provisions of the CHT Accord, the government has continued to spread untrue, fabricated and misleading propaganda at home and abroad that 48 of the 72 clauses of the Accord have been fully implemented.

For example, Section 1 of Part ‘A’ of the Accord provides for the preservation of the characteristics of Jumma (tribal) inhabited area of the CHT region. The government claims that this provision has been ‘fully implemented’. The government opines that the development and preservation of the language and culture of tribes, minor races, ethnic sects and communities has been ensured through the inclusion of Article 23A in the 15th amendment to the Constitution. In fact, the claim made by the government is not appropriate.

In fact, ensuring this provision of the Accord depends on resolution of land disputes, protection of land rights of hill people, introduction of special governance structure in CHT, rehabilitation of returned Jumma refugees and internally displaced Jumma people, execution of definition of non-tribal (Bengali) permanent residents, preparation of voter list with permanent residents, etc. Besides, during the formal dialogue, the government delegation repeatedly assured that the Hon’ble Prime Minister had promised to rehabilitate the settlers in the plains. But these issues have not been implemented yet.

In addition, in order to preserve the tribal pre-dominated characteristics of the region, it is urgent (1) to introduce a statutory measure to the constitution stating that CHT is a region pre-dominated by multi-lingual hill/tribal people; (2) to incorporate the words ‘or the hill people of CHT’ immediately after the words “in favour of women or children or the backward sections of citizens” in Article 28(4) of the constitution and (3) to adopt and implement a plan for rehabilitation of settlers in the plain districts. However, no measure has yet been undertaken to that affect.

As another example, it may be mentioned that section 2 of Part ‘A’ of the Accord which stipulates for amendments to the various laws, rules and regulations applicable in the CHT in accordance with the Accord. The government claims that this provision has been fully implemented. In fact, only the CHT Regional Council Act, three Hill District Council Acts and the CHT Land Dispute Resolution Commission Act have been enacted. In order to implement the said provision of the Accord, it is necessary to amend other laws applicable in the CHT such as Police Act 1861, Police Regulation and CHT Regulation 1900. Although recommendations have been made by the CHT Regional Council to amend a number of laws, rules and circulars, no action has been taken by the government till to-date. Therefore, the government’s view that this provision has been ‘fully implemented’ is not correct.

For instance, it can also be cited that since the CHT Regulation of 1900 was not amended, various complications have been created in the governance system of the CHT region. The CHT Accord stipulates supervision and coordination of all subjects supposed to be conducted by the CHT Regional Council including all development programs of the Hill District Councils and CHT Development Board, general administration and law & order in the three hill districts, formulation of laws in consultation with and as per advice of the CHT Regional Council, NGO activities and disaster & relief management, etc., but the Regional Council is yet to be entrusted with above-said powers and as a result, supervision and coordination of all subjects by the Regional Council have been left stunned.

On the other hand, the subjects of land and land management, supervision, preservation and improvement of law and order of the district, and police (local) are under the jurisdiction of the three Hill District Councils. But the Deputy Commissioners (DCs) of three hill districts, in one hand, have been exercising all powers related to general administration on plea of merit conferred in the CHT Regulation 1900, on the other hand, have been running land and land management and law and order activities in the district under the auspices of the government. Therefore, the government’s view that this provision has been ‘fully implemented’ is not correct.

After following dilly-dallying tactics for 15 years long, finally in October 2016, the controversial provisions of the CHT Land Dispute Resolution Commission Act 2001 were amended. But afterward, the government, once again, has been procrastinating in adoption of the Rules of the Land Commission over the last years. The Land Commission has not been able to start judicial works on disputes of lands for not having the Rules framed as of today. Consequently, due to non-settlement of disputes over lands, conflicts and clashes between the Jumma and Bengali people over the land disputes have been taking place every now and then which is heightening day by day.

In the context of the implementation of the CHT Accord, the government frequently highlights the issue of development of the CHT. It cannot be said that progress in the areas of education, healthcare, drinking water and sanitation, roads, socio-economic development, etc. has not been made in some extent. However, the CHT region is still far behind at the national level. It is also true that through up-down development programs destructive to the national existence and culture of the Jumma people are being implemented. One-sided declaration of more than two lakh acres of traditionally possessed lands and Mouza lands of the Jumma people as reserve forest, thousand acres of lands given in lease to the outsiders, thousand acres of lands taken in acquisition and occupation for military and tourism purpose, expansion of cluster villages of the settlers and continuous settlement of the outsiders, communal attacks upon the Jumma people and setting their villages in fire, violence against women and children, etc. are some examples through which the Jumma people are being evicted.

One such example is the plan to build a five-star hotel and amusement park in Chimbuk hills. In the meantime, hundreds of Jumma families including Mro villagers have already been evicted from their ancestral villages as a result of such development activities. The construction of the five-star hotel and amusement park is expected to wipe out many more villages of Mro people and to endanger the livelihoods of about 10,000 Jum farmers.

At present, instead of resolving politically and peacefully, the solution to the CHT problem has been chosen through repression like the previous dictators. Although a hundred of temporary camps have been withdrawn in the past, but more than 400 temporary camps are still in force in CHT. Moreover, in violation of the Accord, the government issued ‘Operation Uttoron’ in the name of cooperation to the implementation of CHT Accord in 2001.

Extensive propaganda and conspiratorial activities have been intensified to identify the individuals and organizations who are vocal in demanding the implementation of the CHT Accord as ‘terrorists’, ‘extortionists’ and ‘armed miscreants.’ Raids, house searches, arrests, extrajudicial killings in the name of crossfire, filing of fabricated cases, etc. have been intensified in the CHT. On the one hand, propaganda against Jumma people and CHT through hired yellow journalists, on the other hand, restrictions on freedom of expression, freedom of assembly and association, publishing news on human rights violations have been escalated in these days. As a result, the news of oppression and torture on the Jumma people is completely hidden from the media and the people of the country. Thus, today the situation in the CHT is becoming as unstable and conflicting as the pre-accord situation. 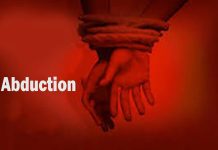