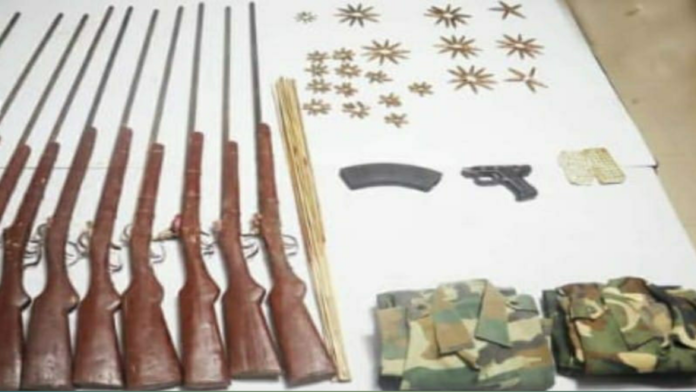 Hill Voice, 30 November 2020, Rangamati &Bandarban: Recently, various online media sources have reported the consecutive seizure of arms by the army in Sajek of Rangamati Hill District and by the BGB in Ruma of Bandarban Hill District. In these reports, it has been mentioned that the army and BGB have carried out operations and recovered weapons from tribal and separatist terrorists.

However, in the inquiryit is revealed that the army and the BGB had gone to the area, but they did not find any terrorists, nor did they actually recover weapons from any of the terrorists. According to locals, these are dramas staged by the army and the BGB. They have supplied these weapons themselves and are again claiming that they have rescued them.

A rights activist, who did not want to be named, said the dramaof arms recovery was part of a new conspiracy by the army and the BGB in the name of security and counter-terrorism operations. He added that various officers of the army and the BGB often pretended to carry out these operations and recover weapons for their own promotion. They used their weapons to arrest any unarmed Jumma as a terrorist.

It is worth mentioning that it was announced that in the morning of November 28, 2020, in a special operation conducted by Baghaihat Army Zone of BaghaichariUpazila of Rangamati, sophisticated 2 AK-47,2 AK-47 magazines, 1 SMG, one SMG magazine and 21 rounds of ammunition were recovered. It has been mentioned that a group of army from the Baghaihat army zone raided the place of a regional group and recovered the weapons, and the tribal militants have fled.

A villager in Sajek said that they had gone to the spot, but the recovery of the weapon was completely fabricated. They have kept those arms there and that weapon is the weapon of the army.

On the other hand, it was announced that on the night of 29 November 2020, a group of BGB members of Bolipara BGB camp of 38 Battalion of RumaUpazila of Bandarban raided the hideout of armed terrorists in Zaitun Para area of ​​Galengya Union and recovered 10 LGs, 180 rounds of gun ammunition and 2 sets of military uniform and different tools including a SMG magazine. It was mentioned that no one could be arrested as the terrorists fled after sensing the presence of the security forces.

Asked about this, several villagers, who did not want to be named, said that BGB members had already left the weapons in the area and later conducted a recovery operation.