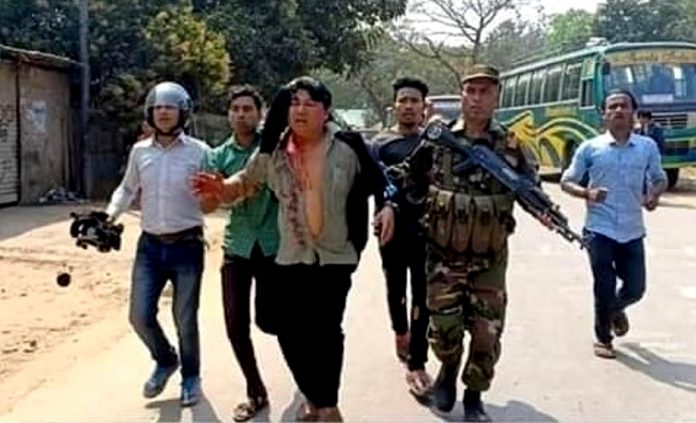 Hill Voice, 5 March 2020, Khagrachari:  On 05 March 2020, from the morning after the abduction of a Bengali settler motorcycle driver from Jallia Para area of Guimara upazila under Khagrachari Hill District, the accusation of murder triggered to communal tension against the indigenous Jumma people. At one point, they attacked a nearby Jumma village and seriously injured to an innocent person named Mr. Mangsapru Chowdhury and also beaten many more indigenous jumma people indiscriminately. The injured Mangsapru Chowdhury is a resident of Batnatali area of Manikchhari Upazila under Khagrachari Hill District.

It is learnt that on that day, the Bengali settlers organized a procession and rally since from the morning, accusing them of killing a Bengali motorcycle driver. The processions and rallies created tensions with the communal and provocative slogans against Jumma people of the area. They lit tires on the road and stopped vehicles movement. At one point, the agitated Bengali settlers attacked on the nearby Jumma people, including the jumma passengers of the vehicles, and the attacked with sticks, short and sharp weapons. The Bengali Settlers created communal tension in that area almost all day long. In the afternoon, the Settlers lifted the road blockade by the administration’s intervention.