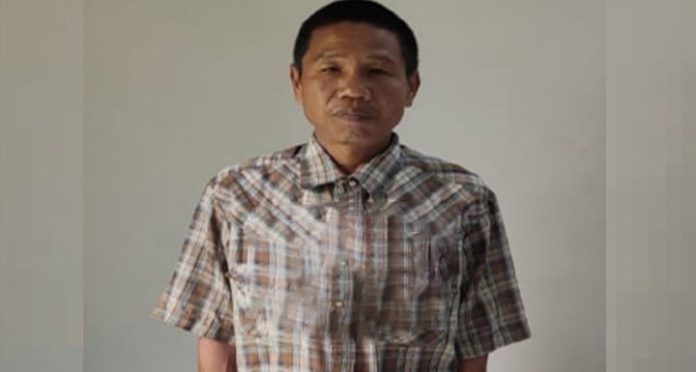 Hill Voice, 29 September 2022, Rangamati: The army have arrested a Jumma named Alomoy Chakma alias Boloy from Ghagra of Kaukhali upazila of Rangamati planting a country made pistol and 3 rounds of ammunition.

Last Sunday (September 25) at 10:00 pm, the victim was arrested by surrounding his house in Champatali area of Ghagra under Ghagra army camp.

According to local sources, Alomoy Chakma was not at home when the army surrounded the house. At that time, he was arrested by calling him through his family members over mobile phone.

It is reported that Alomoy Chakma was handed over to the police after being taken to the Ghagra camp and after being brutally beaten. He is reported to be the son of Gupta Bihari Chakma of Uttar Firingi Para in Nanyachar Upazila of Rangamati.

It is learnt that he was an active member of the Kaukhali unit of the Prasit-backed group of UPDF at one time. A long time ago around 2006 he left UPDF and moved to a normal life and since then he has been living in Ghagra with his family. It is reported that he was not involved in any political activities since then.

But the army spread propaganda through the state-backed local yellow news media that he was a “leader of Jana Samhati Samiti (JSS)” and that “one country-made pistol and 3 rounds of ammunition were recovered wrapped in cloth in a bucket in his house”.

When contacted Sajib Chakma, Assistant Information and Publicity Secretary of JSS, he said that the army often does such dirty work for promotion. And in this case, they shown arrested the victim putting guns for making excuse of their misdeeds. And if someone is arrested, they continue to try to make him a ‘terrorist’ by labeling him as a member of Jana Samhati Samiti.

The latest example as such kind is arrest of Shanti Kumar Chakma Nunya (52), an innocent Jumma fisherman by planting arm from Jibtali Union of Rangamati Sadar Upazila on September 22 at 2:00 PM, and the army spread false propaganda that he was a JSS member. Even an Hindu Bengali woodcutter named Nikhil Das, who was shot by the army in Kalapani area of Reservemukh under Kaptai upazila on July 28 was labeled a JSS member by the army, Sajib Chakma alleged.

Sajib Chakma also alleged that this is how the army is playing the game of stealing people’s lives in the Chittagong Hill Tracts, which is not published in the national massmedia because of the fear of intimidation of the army. In January-August 2022 alone, a total of 72 incidents of human rights violations were committed by the security and law enforcement agencies, in which 210 Jumma people have been subjected to human rights violations, he alleged.