Hill Voice, 26 October 2019, Saturday, Bandarban:  Three illegal brick kilns occupying one-tenth of land of the three wards of Faitong Union in Lama upazila of Bandarban have been running for a decade. Cultivated lands, mountains and forests are being destroyed on a daily basis. Although the administration and the Department of the Environment sometimes fine, unfortunately not a single brick kiln had been shut down.

It is seen that the brick kiln has been erected on the premises of the school, on the bank of canal and on the side of the road also. Nine bricks have been erected in Shibatolipara, Mongbachingpara and May Angpara areas of ward no 4. This brick kilns authorities have been seen cutting down the mountains around. Fifteen brick kilns were constructed in Lambashia, Borokhola, Old Headman para of ward no 8 and seven brick kilns in Manikpur of ward number 9. The hills are being cut arbitrarily in these areas too. In these brick kilns, hundreds of workers from different areas are spending busy time in brick making.

Public representatives and local people of the area said that the extent of the agricultural land of the Faitung Union has dropped alarmingly. The balance of the environment in this area is also under threat. When Umramang Marma, the headman of the Faitung Mouza was asked how much of the land in this union is occupied by the brick kilns, he answered that the whole area of Faitung union is occupied and the area is around 16205 acres. Besides, the ward no 7,8 and 9 consist of 5402-acre land area. 5 percent of the land is occupied by 31 brick kilns in these three wards. There are lots of external workers in these brick kilns and they are more than twice of the population of these three wards.

Sue Mra Aung Marma, a member of Faitong union said, a brick kiln of lama was fined 27 million takas by the Chittagong environment department on October 14. However, none of the brick kilns were shut down. For this reason, at the beginning of the monsoon season, the brick kilns have begun to make bricks again.

The search revealed that the brick kilns are now preparing to start making bricks. The hills are being cut down to the ground to collect soil. Wood is being collected from the forests. Mozammel Haque, a manager at ABC briks, said brick furnaces will flare up within a few days. Soil and fuelwood is being collected to make bricks. Due to end of the trees, wood is being brought from various places including Chakaria, Fashiakhali, Baniarchora of Faitong forest. Mozammel Haque also said that burning six lakh bricks in a brick kilns requires 240 metric ton of firewood. As a result, 74400 ton of fuel wood is being burnt every year in the 31 brick kilns to fire 7440000 ton of bricks in Faitong.

Jala Ahmed, chairmen of the Faitong Union Parishad, also owns brick kilns. He said that, not one of the 31 brick kilns including his own has a permit from the department of the environment and license from district administration. But the owners pay the value added tax and income tax. Trade license were obtained from the Union Parishad. These cannot be termed illegal as this brick kilns are paying vat and income tax.

Local residents alleged that black smoke of brick kilns is damaging the surrounding environment. Former UP member of Shibatalipara, Emeng Marma said that the moment they start to burn furnace, the surrounding neighborhood covered with black smoke and dust. Due to the brick kiln, the water sources in the area, including the Shivatali canal, are drying up. During the dry season there is a severe water crisis in the area. If the brick kilns are not closed, the Shivatali area will be unsuitable for living in the next few years.

Chittagong’s Director of the Environment Department Moazzem Hossain said all illegal brick kilns were fined on October 9. This action is being taken against the owners to force the brick closure.

Lama Upazila Executive Officer (UNO) Noor-Jannat Rumi said the brick kilns of Faitang were not only a distraction to the locals, but also a huge problem for the administration. If closed, the owners can go to court. For this, we are pressuring them in various ways, so that the owners themselves are forced to close the bricks by own. 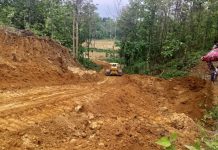