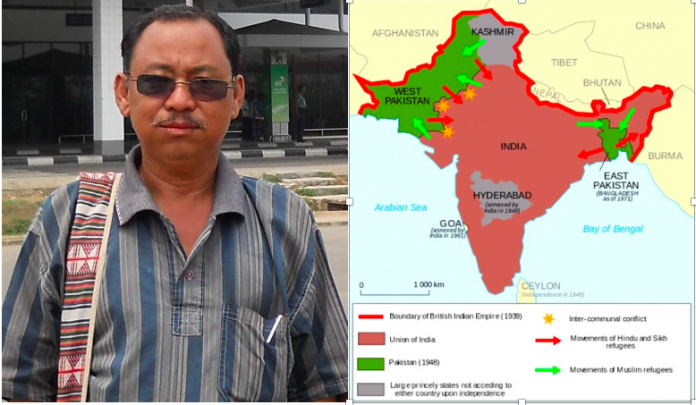 Conquest of the Chakma Kingdom by British:

A long time before advent of the British in India, the Chakma community people had a footing over various areas of Chittagong Hill Tracts (CHT) region touching the Southeast India and Burma border lines. By then, they had developed a strategic friendly tie with the Mughal authority of Chittagong through paying 11 mounds of corpus as tax and continued to retain their self-determining right and sovereignty of their land. With this, predecessors of the Chakma dynasty had accepted the Mughal’s royal title ‘Khan’ as a symbol of alliance. During the time of British arrival, kingdom area of the Chakmas was: on the east Kuki kingdom (Mizoram) and Arakan province of Myanmar, Nizampur Road of Chittagong on the west, the Feni River of Hill Tripura on the North and on the South Chittagong district and beach of the Bay of Bengal (Cox’s Bazar and the adjoining areas by the confluence of the Naaf River).

The British East India Company, after winning the Plassey War in 1757, gained the Diwani of Suba-Chittagong in 1760 by merit of which became active to conquer the adjoining Chakma kingdom, the hilly region. Consequently, the British earned hostility with the Chakmas and finally, this led to the war. From 1777 to 1786, despite engagement in 3 battles, the Chakma kingdom could not be brought under British subjugation. Finding no other means, the British authority resorted to policy of setting embargo on the local trade centers. In this situation, the then Chakma king Jaanbox Khan, himself, reached Kolkata deceiving the British army in 1787. He called on Honorable Governor General Lord Warren Hastings at Fort William and entered upon an Agreement known as ‘Corpus Treaty.’ Following the Treaty, the British authority brought the CHT region under British Empire by No. XXII of 1860. 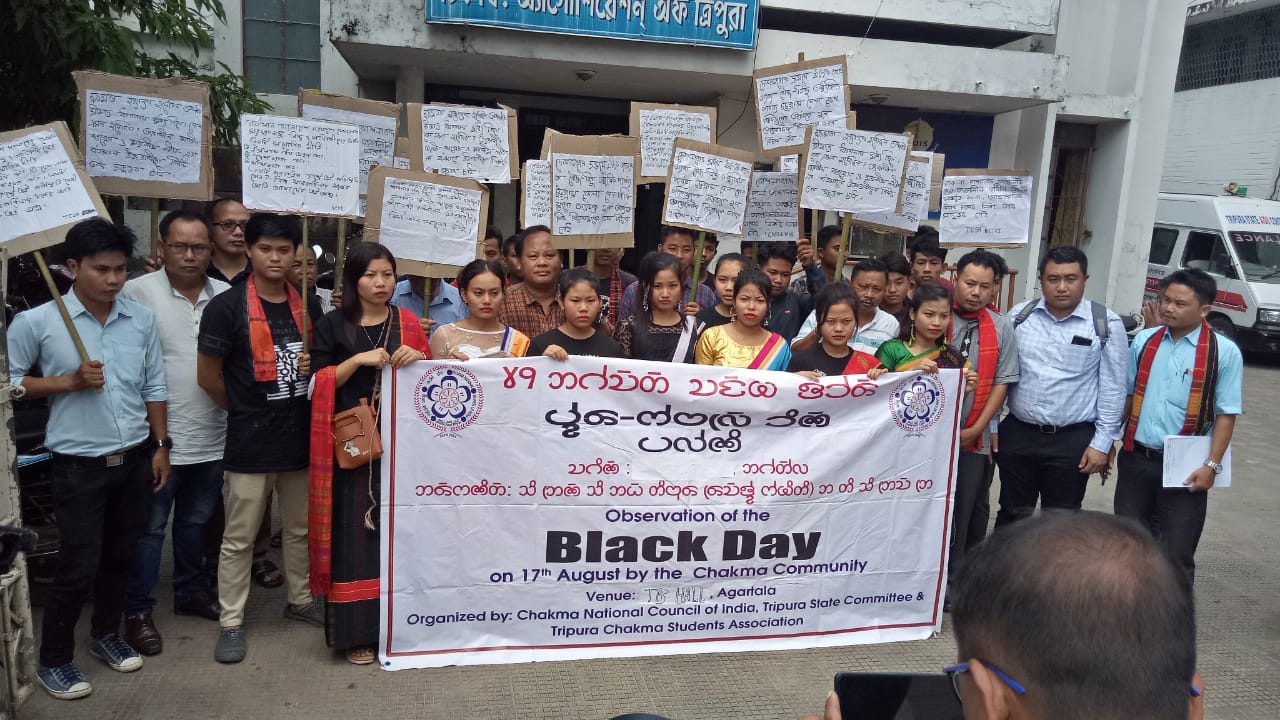 It was by that time, the area of Chakma kingdom was 7000 square miles. For administrative convenience, a sizeable area was attached to Chittagong district and as a result, the area of the kingdom got reduced to 6000 square miles. With assertion of British rule, the Chakma kingdom was divided into three parts by forming the Bohmong Circle in 1871 with the South and the Mong Circle in 1884 with the North. Internal governance is assigned to each circle under the name of a king or circle chief. The CHT came to be governed by a number of laws enacted from time to time. Among them were Act No. 22 of 180 (ACT XXII of 1860), Act No. 4 of 1863 (Rule), Rule No. 3 of 1873 and Rule No. 3 of 1881. The Circles in the CHT were reorganized in 1892 by amending and changing the Regional Circle Rules of 1884. Later, a law called the Chittagong Hill Tracts Regulation was promulgated on 16 January 1900, with major changes and additions to the Rules of Governance of 1892. The Act contains the followings:

It is worth mentioning that the designation of District Superintendent was renamed as Deputy Commissioner in 1867. In 1881, the British Government introduced the CHT Frontier Police Regulation 1881 and accordingly initiated to form up a local police force with the indigenous people. Much later, in 1900, the British government introduced ‘CHT Regulation 1900, which is also popularly known as “CHT Manual”. It may be said that through formulation of the act, the British government formally recognized the indigenous peoples’ rights to regional self-determination.

In later periods, the CHT was declared to be “backward tracts” in 1919 and “Excluded Area” in 1935. Effectiveness of these declarations was in force till the partition in 1947.

At the very beginning of the British rule, although there had been applied a divisive policy of splitting the land into three parts to weaken the Chakma community people and their unity, integrity and firm determination yet it is true that with the legal provision, they provided a safeguard to other ethnic national minority communities and backward indigenous peoples including the Chakma people from the economic exploitation and aggression of the adjacent non-tribal community people living in plains. This we can find if we study the chronology of introducing laws from the period of Corpus Treaty in 1787 to 1935 during which set of various administrative laws and regulations had been formulated. So, it may be said that even though the CHT was subjugated through British-brand ill Imperial policy, yet in later years, the British authority could realize that the Chakma people actually, had not been their subjects but only ‘a people’ contributing tributary to their government. It was for this reason in 1829, Mr. Haul Bed, Commissioner of Chittagong mentioned in his letter to the British authority: ÒThe hill tribes of CHT are not British subjects, but merely tributaries, and we have no rights on our part to interfere with their internal arrangements”. In practice, during their reign, the British seldom interfere in internal social system of the Chakma people.

Partition: Beginning of Nightfall in life of the Chakma people

Standing in the Redford (Lal Qila) of Delhi at mid-night of 14 August 1947, Pandit Jawaharlal Nehru as the maiden Prime Minister of India while declaring the most-desired independence of India delivered his speech terming it a ‘Tryst with Destiny’ in an emotionally driven voice, which later on, was widely discussed with admiration. On this lengthy speech someone of the poets said: The impact of independence has arrived riding on the lion (A metaphorical expression in line with the arrival of Goddess Durga, the destroyer of distress, riding on a lion). But for the Chakma people, the impact of independence had arrived riding on a monster of distress. The reason is that at the eve of gaining independence during the partition, it was solely due to utter indifference on part of the Indian leadership, with total unlawful annexation of the hill district to Pakistan, they lost their right to self-determination; their existence got endangered; their ancestral lands and homesteads got dispossessed; they repeatedly fell prey to systematic ‘ethnic cleansing’ process; got evicted from their lands in large numbers; repeatedly being victimized in communal riots; and they had to take refuge to India more than once. Now, for having been globally introduced as immigrants right being in own birth land, as ‘Diaspora’ likewise the Jews. Hence, the independence had brought in an era of darkness to their life.

The seed of country’s partition was inadvertently sown since all through the time of waging movement against the partition of Bengal in 1905. Right fourteen and a half months later of putting the Bengal-partition order into force, the Muslim League, for the first time, was established in presence of the Muslim elite class in Dhaka under pioneer role of Nawab Sir Salimullah on 30 December 1906. Initially, this new formation had no popularity. It was only the Indian National Congress, which would enjoy optimal popularity of the Muslim people. But in course of time, as many wise Muslim elites including poet Mohammad Iqbal joined the party and above all, with Jinnah at the helm, the organization began to boost up.

On the other hand, the indirect role of Hindu nationalists had an effective contribution to the rapid development of Muslim League. In fact, the higher caste Hindus enjoyed monopoly rights in education, professions, government services, other facilities, etc. throughout the Nineteen century. By then, the Muslims were far behind in those sectors. But the scenario got changed towards 1930s of Twentieth century. The seed of poisonous communal tree, which was sown in 1906, now grew up to a giant tree. Towards end of 1940s, it was found that the giant tree could not be uprooted by any means. By then the Hindu leaders of higher caste could realize that the danger was imminent and parting was the only means to protect the interest. Hence, they acceded to the proposal given in early 1947 to conclude the partition through dividing Bengal and Punjab.

It was only Gandhiji who did not accept the country’s partition. He declared: “After my death, the country will be parted on my dead body.” But none was to pay heed to old man’s words. Trivial was the country’s partition to Nehru, Patel and Azad who were extremely hungry after the post-independence state power. It was Jinnah who was also not interested in hearing any words but all about partition only. The Hindu nationalist party, Hindu Mohasabha was though initially in disagreement on partition proposal yet at last they accepted it. On the other hand, the Communist Party of India, the then third political force in respect of mass organization, was in deadly opposition to country’s partition. Yet the country got parted in a hurry. Independent India and Independent Pakistan came to existence. But Jinnah was discontentment with what had been received. He termed it to have been a moth-eaten Pakistan. He wanted from Lahore to Delhi. However, Lahore was there to derive complacency.

But the Panjabi people had remained dejected forever on loss of Lahore. Since, Lahore symbolizes the prowess of the Panjubi people and capital of the Punjub Keshari Ranjit Singh. Yet the country was parted without knowledge of the Indians about the final demarcation lines. This unleashed the bitter most consequences throughout the country. As a result of dreadful communal riot at least 10 lakhs innocent souls had been left wounded during partition. Numerous incidents of plundering, arson, rape, kidnapping and forcible conversion overshadowed the whole country. Many became homeless and aimless. At least 1 crore and 80 lakh people, for life sake, got migrated leaving behind relatives and known environment very much of their own. The migration flow, though weaker, is yet on the run – has not got stopped. Soon an agreement was signed between the Prime Ministers of the two new nations (Nehru-Liaquat Accord) for ensuring stability, safeguard and assurance of the migrated people. But the Accord was not properly respected on both sides. Consequently, the inflammation of partition took further several years to get subsided.