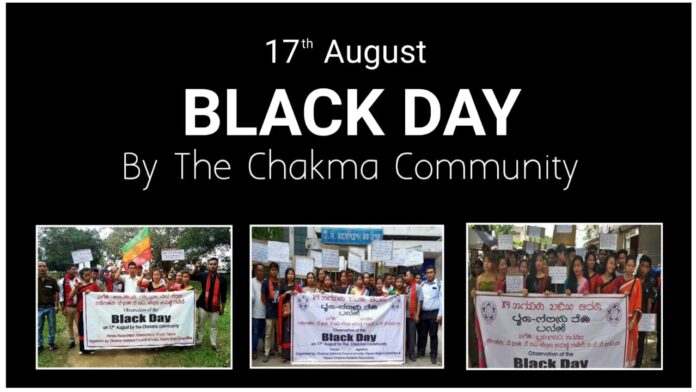 Hill Voice, 16 August 2021, Special Correspondent: An online discussion meeting (webinar) will be held tomorrow, 17 August 2021, on the story of the suffering of different indigenous ethnic groups, including the Chittagong Hill Tracts (CHT) of Bangladesh and the Indian Chakma people. Speakers from Tripura, Mizoram, Assam, Arunachal Pradesh, Delhi and Canada will participate in the webinar, sources said.

It may be mentioned that since 2016, the Chakma people of India have been observing ’17th of August’ every year as a ‘Black Day’ at the initiative of the Chakma National Council of India (CNCI). The black day was observed to protest the annexation of the 98.5 per cent non-Muslim (indigenous peoples)-inhabited CHT region to the Muslim-populated Pakistan during the partition of 1947. The decision to observe Black Day was taken at the first national conference of the CNCI held on March 24 and 25, 2016 in Guwahati, the capital of Assam. Since then, this ‘Black Day’ has been celebrated in various Chakma-inhabited areas of India.

The online discussion will be streamed live on the Dhunduk Agartala Facebook page on Tuesday, August 17, 2021, at 6:00 pm Indian time and at 6:30 pm Bangladesh time.