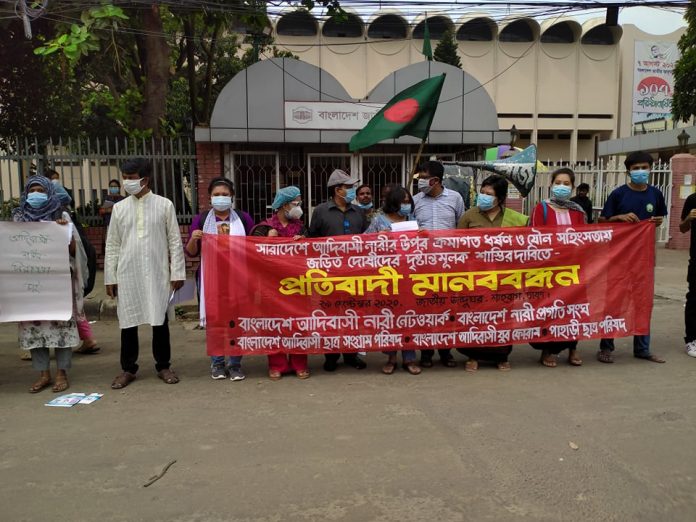 This opinion was raised at the human chain jointly organized by Bangladesh Indigenous Youth Forum, Bangladesh Nari Pragati Sangha, Bangladesh Indigenous Women’s Network, Adivasi Chhatra Sangram Parishad and Pahari Chhatra Parishad in front of the National Museum on 29 September 2020 Tuesday morning demanding arrest and capital punishment for all the perpetrators of continuous violence and rape against indigenous women and girls.

Shahnaz Sumi, Deputy Director of Bangladesh Nari Pragati Sangha, delivered the keynote address on behalf of the organizers at the beginning of the human chain. She said that on 24 September 2020, at around 2.30 pm, a mentally challenged indigenous woman was gang-raped and looted by 9 Bengali settlers at victim’s house in Balpiye Adam village of No. 1 Golabari Union in Khagrachhari Sadar.

An Indigenous schoolgirl was raped by a policeman in Dighinala on 14 September 2020 and a Manipuri woman (60) was physically abused on 19 September 2020 by Umed Mian, a resident of Katabil village in No. 7 Adampur union of Kamalganj police station in Moulvibazar district.

On the other, on 14 September 2020, the entire banana plantation of 0.40 acres of land of Basanti Rema in Pegamari village of Madhupurgarh area was cut down by the local forest department without any notice. This is an extreme human rights violation.

Shahnaz Sumi raised some demands from the human chain. The demands include: 1. The perpetrators of all recent acts of oppression, torture, rape and violence against Indigenous women must be given the highest punishment; 2. Indigenous families affected by the incident must be provided security with adequate compensation; 3. The administration must play an effective role in stopping all forms of violence against women, including indigenous women; 4. A special cell should be formed under the Ministry of Chittagong Hill Tracts to take action against all forms of oppression against indigenous Jumma women; 5. The full implementation of the Chittagong Hill Tracts Accord including withdrawal of the temporary army camps from the region should be done and the Bengali settlers should be rehabilitated outside the Chittagong Hill Tracts with due honor.

Robayet Ferdous said that the kind of rape that took place during the liberation war was supposed to be the last rape. But why are so many women being raped now in this independent Bangladesh, he questioned. He added that the violence against indigenous women is a tool of the state that is part of the eviction of indigenous people.

Khairul Islam said a separate tribunal for indigenous women should be set up and accused should be tried through special tribunals like war criminals. He referred to the rape and violence of indigenous women as part of ethnic oppression.

Tariq Hossain Mithul said, “We are apprehensive about the kind of violence against women that is coming in the newspapers.” He noted that the change in the judiciary was necessary if it did not want to be known as a failed state. He also called to provide full support to the indigenous families affected by the violence.

Ujjwal Azim, a representative of the Kapaeeng Foundation, drew the attention of the Prime Minister and called for speedy trial of such heinous incidents. He also demanded the formation of a separate land commission for the plains.