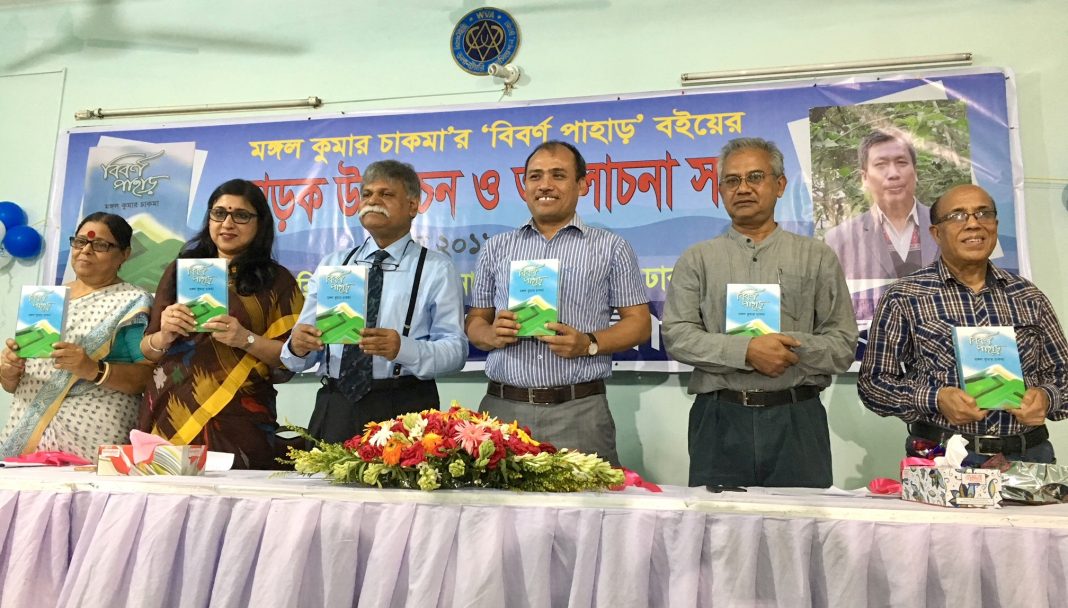 The book titled: “Biborno Pahar: Chittagong Hill Tracts (CHT) Crisis and Solution” authored by Mangal Kumar Chakma was published by Boteshwar Bornon and made to public in the last Book Fair held this year. It may be well said that the book depicts a fresh-form of self-mannered presentation of deep-felt realization at core of the heart of a son-of-the soil on Chittagong Hill Tracts. The main title of the book is “Biborno Pahar” (in English: Faded Hills) followed by the sub-title: ‘CHT Crisis and Solution’ through which the content of the book can be guessed without employing much effort. Basically, the book is a compendium of various articles and write-ups of the author written on CHT issues and implementation status of CHT Accord and hurdles thereof. In the ‘Few Words’ of the author, Mangal Kumar Chakma said: “This book accommodates the articles, such as, historical aspects of CHT crisis, inner reality of the crisis, outlook of the ruling class and salient features of the CHT Accord and their interpretations, its potentiality and solution of the crisis. However, though the book is clustered with articles yet thematically they are entwining, integral and inseparably inter-related. Author Mangal Kumar Chakma had a skillful effort in interweaving the articles in such a manner that continuity has been maintained and that the book opens out the whole picture of the CHT crisis.

Jyotirindra Bodhipriya Larma, Chairman of CHT Regional Council and also President of Bangladesh Indigenous Peoples’ Forum has kindly contributed in writing out ‘Foreword’ of the book.  In the Foreword, he has properly expressed saying: “The historical aspects of the crisis, inner cause and effect of the crisis and present status of CHT Accord implementation, its obstructions and means of solution to the crisis, have been impartially made vivid and precise.” He has hopefully expressed his opinion saying: “The book will be helpful to grasp righteous understanding of CHT crisis and its solution.”

In the book, the author Mangal Kumar Chakma intends to express that in consequence to the continued non-recognition, on part of the ruling class, to the existent separate nationalities and culture of their own, historical governance system, prevalent Jumma-dominated regional status and administrative system established by laws, the CHT region, which is already endowed with peace and racial harmony since the time immemorial, has got a worse shape of unrest. With an aim to resolve the historical crisis by political and peaceful means, the CHT Accord was signed in 1997. People of all walks of life in CHT cherished a hope that the peace and prosperity would be attained through the perennial political solution. But the ruling class that had entered upon the historic CHT Accord in which they assured of self-rule to the CHT permanent residents and preservation of the Jumma-dominated features of the CHT region, it is the same ruling class by which the Accord has been being trampled down in words and actions. The ruling class, in their turns in the power, has been executing the policies and programs deadly harmful to the interest of the Jumma people and the CHT Accord, as had been done by the predecessors while keeping the core issues of the Accord unimplemented.

Author Mr. Chakma has mentioned that there cannot be any alternative to proper solution to the CHT crisis in greater national interest. He has extolled his proper and reality-based opinion high saying that the sustainable solution to the CHT crisis lies in the proper and full implementation of the CHT Accord. In his book, the author has mentioned that sustenance of peace lies in the proper and full implementation of the commitment of introducing Special Administrative System in CHT as had been laid down in the Accord; and through execution of the commitment for assertion of political, economic, social, cultural and land rights of the indigenous Jumma peoples. The author has made a point in his book expressing that being one of the victimized Jumma society members, as the way he has felt the inside aspects of the problems; as he has longed the in-born rights as a human being; as the manner he has had experience of piercing pain of sufferings; and as he has visualized the possibility of solution to the problems and inculcated hopes against hopes deep at heart – all this has led him to focus them in his book.

Author Mangal Kumar Chakma has mentioned further that the CHT Accord was signed in exchange of immeasurable sacrifice and longing. It was due to bloody armed conflict, in one hand, the Jumma people had to sacrifice many blooming lives while many Jawans of the patriotic army had to embrace death. Loss mounted by millions in money and properties. Both Jumma people and Bengali people had to endure inexplicable pains and sufferings. Had the crisis of CHT been resolved as per the demand and proposals made by M N Larma, the then Member of National Assembly and also an undisputable leader, there would not have faced this much irreparable loss and unendurable pain as such. After armed conflict for more than two and a half decades, the ground for undoing the wrong done in 1970s was created through signing of the CHT Accord in 1997; and with this, the space for a permanent political solution to the CHT crisis has come into being. But even after 22 years following signing of the Accord, as the CHT Accord has not yet been implemented properly and to the full, the big question in urgency has sprung up in front of all the concerned: be we, the countrymen, government, administration, law enforcers, intelligence & security forces, national and regional political leadership, policy makers, civil society, the Jumma people, shall we walk along the path of the CHT Accord for permanent solution of CHT problem or step along the wrong path that had marked in 1972?

The permanent residents of the CHT and the democratic, non-communal and progressive quarters of the country are extremely agitated exasperated, discontented and despaired due to non-implementation of the CHT Accord despite 22 years have passed. Consequently, the situation in CHT is gradually heading for the worse day by day. The situation as a whole in CHT is almost about to getting back to the pre-accord days. The existing situation is being evaluated by various quarters in various ways and they are producing their opinions from their own context. In this juncture, an influential quarter of vested interest is seen manipulating the situation and raising allegations of extortion, armed activities, armed terrorism, separatist activities categorically against the group of Jumma people who are engaged in the movement for Accord implementation and vocal against the government atrocities, with an ill-intention to ‘criminalize’ them at home and in abroad. It may be estimated that the ill-intended quarter of vested interest is conducting their ill-efforts obviously, to hide their failure in implementation of the CHT Accord and to project the just movement of civil society and Jumma people for implementation of the Accord as a ‘terrorist activities’. At this, the crisis is being made more and more complex and the Jumma people are being pushed apart as before.

It requires not to be mentioned that instead of keeping the CHT crisis burning, those who really want to solve for once and all, instead of imposing force, willing to seek democratic solution to the problem, have been expressing their opinions suggesting that proper and full implementation of the CHT Accord is the only political and peaceful means to resolve the CHT crisis. Hence, in tune with the author as he has concluded in the last paragraph of his book, it is to be re-echoed that it has become an urgency to implement the CHT Accord properly and to its full for greater interest of the nation. Therefore, without wasting time any further, the government has to come forward with a time-bound program of action (roadmap) for implementation of the Accord aimed at political and peaceful solution to the CHT crisis for greater interest of the country.

Attack on Pujomandap in Comilla, Unity council demands arrest and punishment of miscreants

Human chain with slogan ‘want schools in Jumma-inhabited areas, not mosques’ in Sajek and Baghaichari