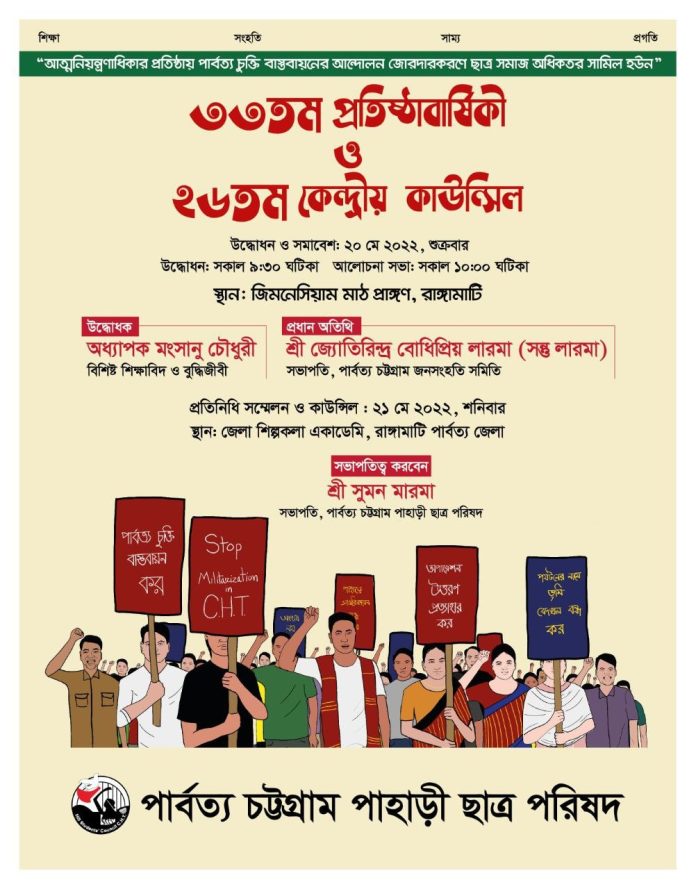 Hill Voice, 19 May 2022, Special Correspondent: The Parbatya Chattagram Pahari Chhatra Parishad (PCP), formed in protest of the Longadu massacre on May 4, 1989, has turned 33 years. For more than three decades from 1989 to 2022, the PCP (Hill Student Council) has completed thirty-three years of glorious struggle, overcoming the steamroller of tyranny, imprisonment, oppression, suppression, injustice, exploitation and deprivation.

On the occasion of the 33rd founding anniversary and the 26th Central Council, PCP will organize inauguration event on Friday 20th May at 9:30 am and a discussion meeting at 10:00 am at Rangamati Gymnasium premises. Professor Mong Sanoo Chowdhury will be present as the inaugural speaker and Jyotirindra Bodhipriya Larma (Santu Larma), President of Parbatya Chttagram Jana Samhati Samiti (PCJSS) will be present as the chief guest. The next day, on Saturday 21 May, a day-long representative conference and council of PCP will be held at Rangamati Shilpakala Academy.

On the occasion of the 33rd founding anniversary and the 26th Central Council, PCP has published posters, leaflet, PCP’s mouthpiece ‘Keokradong’. This year’s theme of the PCP is: “Student community should be more involved in strengthening the movement for the implementation of the Chittagong Hill Tracts (CHT) Accord in establishing the right to self-determination”.

But those efforts and thoughts of the Jumma student society were isolated from each other and were based on educational institutions. As a result, different student organizations were formed under different names in different educational institutions, such as, Tribal Student Council in Chittagong University, Tribal Student Union in Dhaka, Hill Student Union in Rajshahi, Hill Student Organization in Comilla etc. Due to the lack of united efforts and in many cases apolitical character predominance, these student organizations have failed to play a united role in the struggle for the rights of the Jumma people.

In order to form a student organization, PCJSS who was in the armed struggle at that time, continued to motivate and organize the student society to put pressure on the government and to build public opinion and support for the self-determination movement at home and abroad through democratic movement, in addition to the armed movement.

The Greater Chittagong Hill Tracts Hill Students’ Council (PCP) was formed on May 20, 1989 by the Jumma student organizations of various educational institutions of the country to protest against the Longadu massacre. A meeting was held on the afternoon of May 20 at Room No. 202 of Rashid Hall of BUET to take a plan to protest the Longadu genocide. At that meeting, it was decided to form an organization called ‘Greater Chittagong Hill Tracts Hill Student Council’ by electing Prashanta Tripura as convener after discussions till night. Then on May 21, hundreds of Jumma students from different educational institutions from Dhaka, Chittagong, Rajshahi and Jahangirnagar joined the silent procession in protest of the Longadu massacre. A press conference was held that afternoon.

Subsequently, the first conference of PCP was held on 9 July 1989. The inaugural ceremony was held at the Aporajeo foothills of Dhaka University. At that conference, the first 17-member central committee of PCP was formed with Bidhan Chakma as president and Dhiraj Chakma as general secretary.

In this way, the PCP started its journey in protest of the Longadu massacre with the strong commitment and conviction of representing the Jumma students of the CHT. From its inception, PCP has demanded a solution to various problems of Jumma students, including a demand for a universal science-based people-oriented secular education system, as well as a real political solution to the CHT problem with the constitutional guarantee. The Jumma student community continues to unite under the banner of PCP.

It is cited in the PCP leaflet that even in the post-CHT Accord 1997 period, the PCP has been playing a strong role in the movement for the implementation of the CHT Accord. PCP has been carrying out programs related to the interests of Jumma people like organizing Jumma students, increasing quota in public universities, introducing primary education in the mother tongue of indigenous peoples, free coaching classes, education campaigns, distribution of annual winter clothes etc. On the other hand, PCP is also strong vocal against ongoing land grabbing, communal attacks on Jumma people, arbitrary arrests, extrajudicial killings, rape of Jumma women, setting up army camps in violation of the CHT Accord, massive militarization in CHT and resistance against Islamic Expansionism. Many dedicated leaders and workers of the PCP have been martyred in this battle.

he PCP statement further said that the situation in the CHT is extremely dreadful. The CHT people are living in a larger prison. Although it has been 25 years since the signing of the CHT Accord, which was signed with the aim of resolving the CHT problem politically, the government has left the basic and important issues of the Accord untouched. Although the Awami League government, which signed the CHT Accord, has been in power for 13 consecutive years till now, it has not taken any effective steps and initiatives to implement the unimplemented issues of the Accord. Leaving two-thirds clause of the CHT Accord unimplemented, the government continues to spread untrue, fabricated, baseless and misleading propaganda in home and abroad that 48 out of 72 clauses have been fully implemented.

The PCP mentioned in the statement that in this way the government has completely stopped the process of implementation of the CHT Agreement and has adopted the erroneous policy of communal, undemocratic and extinction of Jumma people’s existence like the previous dictatorial governments. Massive propaganda and conspiring activities are being carried out to label the individuals and organizations who are vocal in demanding the implementation of the CHT Accord, including the members and supporters of PCJSS, as ‘terrorists’, ‘extortionists’ and ‘armed miscreants’. Anti-humanitarian and anti-Jumma activities including house searches, arrests, extrajudicial killings in the name of crossfire, filing of fabricated cases, violence against women, infiltration, land grabbing, and anti-Accord propaganda etc. have been intensified.

On the other hand, in order to obstruct the implementation process of the CHT Agreement and to divert the movement for the implementation of the Agreement, a chaotic situation has been created in the CHT by carrying out terrorist activities like kidnapping, ransom etc. through forming armed terrorist groups, such as, UPDF, JSS (pro-reform), UPDF (Democratic), Mog Party, RSO, ARSA, Jamaat-e-Arakan and other fanatic and fundamentalist groups. The latest formation of such armed terrorist organization is the Kuki-Chin National Front widely known as Bawm Party, which has added a new dimension to the conspiracy of ruling class. In a word, the current status of the CHT went back to the pre-Accord period.

The PCP leaflet also mentioned that the student society has to take the responsibility of protecting the existence of the Jumma people who are gradually being threatened as a result of state aggression. The movement must move forward by ensuring a complementary position under the banner of proper political leadership, taking into account the changing diplomacy of international politics and the expanding regional polarization situation. The Jumma student-youth community, led by the PCJSS, must come forward to bring the ongoing political struggle for the full implementation of the CHT Accord to a potential level with the glory of unwavering courage and sacrifice of the Jumma people. The student community should be more involved in strengthening the movement for the implementation of the CHT Accord to establish self-determination, PCP mentions in its statement.