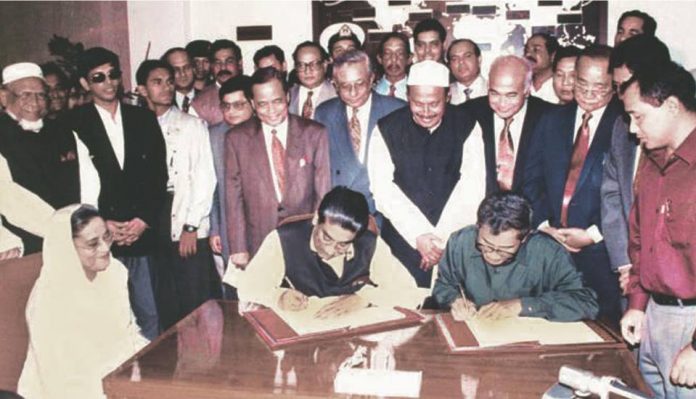 Excluding the statements of both sides of the CHT Accord, what is the statement of the people regarding implementation of the Accord? What does past research say? According to the Kroc Institute of Notre Dame University, a world-renowned academic institution that studies the World Peace Accords, the implementation rate of the CHT Accord is only 49%. You can challenge the data of this study, it may be in the research, but we have to believe the results of this study until we come to the discussion with the data of another new study.

In the last 22 years, at least dozens of research articles have been published in many research books and well-known journals on the CHT issues and the CHT Accord. Most of the studies have yielded unsatisfactory results on the implementation of the CHT Accord. We may reject the statement of PCJSS terming it as communal, partisan and politically biased, but how can we scrap the results of many studies?

In my PhD research, I am trying to find out how the change of government leadership (Leadership turnover) and the change of political ideology (Ideological turnover) in different countries of the world can affect the process of implementation of the peace agreement (positively and negatively). Over the past nine months, I have had the privilege of reviewing the study of Peace Treaty of many researchers and scholars, and I have highlighted them in a small part of my Literature review.

Fearon, Hampson, Jarstad & Nilsson, Beardsly and many other scholars have discussed in detail the implementation of the peace treaty and the impact of various political elements (e.g., role of democracy, type of agreement, role of anti-accord evil forces, cooperation of foreign states and international organizations, etc.). Many scholars, including Brunborg & Urdal, Collier & Hoeffler, Murshed & Gates, Stewart, Graham & Langer, have studied how various economic factors (e.g., poverty, economic exploitation-deprivation and human development, etc.) affect the implementation of the peace treaty.

According to Brunborg & Urdal, on the other hand, population pressure and the settlement of outsiders could hamper the peace process. According to Do & Iyer’s analysis, the peace process can be tarnished even in the absence of ethnic coherence and communal harmony. Briefly, there have been hundreds of studies at various universities on why peace agreements have been implemented in many countries and why peace agreements have failed in many countries.

So, there are many types of theoretical analysis of the treaty, but I will draw the line at a theoretical point – Johan Galtung’s idea of ​​Negative-Positive Peace. The essence of this theoretical idea is that there is a negative peace (absence of armed violence) in a country or a region but there is positive peace such as human rights violations, poverty, racial-religious discrimination, violence against women and environmental catastrophe. Can we call that state or society “peaceful”?

In this article, I will try to analyze the CHT Accord only with Negative-Positive Peace theoretical ideas and in the light of relevant existing research references. However, it must be said that, according to the constructivists, the research and analysis of the social sciences can only present the partial truth of a subject and this truth is different from the absolute truth of the natural sciences. For this reason, the debate with full of arguments takes the social sciences forward, and so this discussion of mine cannot go beyond the debate.

First let’s talk about negative peace. We call that socio-political situation “peaceful” when wars, armed conflicts and bloodshed in a region or country stop. Now you say, do we see “negative peace” in the CHT? After the CHT Accord, the war of Shanti Bahini (the then armed wing of the PCJSS) with the security forces of the country has ended. But the type, cause, outcome and player of the conflict in the CHT have changed. Though a war has been buried, but at the same time many wars have started, many players have been born. More than 500 people have been killed and more than 1,000 have been abducted in clashes between regional groups in the hills since the Accord was signed.

On the other hand, many ultra nationalist organizations (such as the CHT Equal Rights Movement and the Hill Bengali Peoples Council) have sprung up, fueling communal politics in the CHT with land issues and misinterpretations of the CHT Accord, which we see reflected in many post-treaty communal attacks. There is added the insurgent groups in Myanmar and the Rohingya problem along with this problem. All in all, the people of the CHT have to find an answer to a fundamental question: who in the hills (special persons/ political parties/ government agencies) does not want the implementation of the CHT Accord and peace among the Jummas and Bengalis?

Now let’s discuss about the positive peace. According to the International Work Group for Indigenous Affairs (IWGIA), Amnesty International, Kapaeeng Foundation, CHT Commission, Braithwaite & D’Costa, Jamil & Panday, Dhaka University and many teachers and researchers from different universities in Bangladesh, the CHT Accord failed to establish peace as expected. This is because human rights violations, violence against women, eviction of indigenous Jumma people from their lands, deforestation, hill cutting, stone extraction and other environmental damage are being done widely. According to the IWGIA, there were 1487 different types of human rights violations carried out in the CHT in 2004-2011, including the demolition of temples, arrests without crime and rape of indigenous women. Most unfortunately, the government failed to properly rehabilitate members of the Shanti Bahini with the ensuring their security. As a result, Disarmament, Demobilization and Reintegration (DDR) has not been fully implemented. On the other hand, a large number of India-returnee refugees could not return to their land and homesteads.

There is also the problem of “militarization”. Braithwaite & D’Costa’s observations are highlighted from their research paper: “But the military proved a bad faith supporter of the peace. Once its objectives of surrender of most weapons, closure of the Tripura insurgent bases, and return of the JSS leadership to their martial control and surveillance was accomplished, successive military leaderships from 1998 to the present mobilised the political power of the military to defer, delay and ultimately deny implementation of key elements of the 1997 agreement. Initially, dozens of temporary military camps were closed in the CHT to implement the demilitarisation part of the agreement, but effective re-militarisation of the CHT was ultimately asserted with slightly fewer military and more police, intelligence and auxiliaries under military.”

This part (CHT region) of the country has been heavily “militarized” that anti-Accord ‘Operation Uttoron’ have been imposed. One law enforcement and security force member has been deployed for every ten people in the CHT. A battalion of RAB is going to be added to it. How much more? I took class of my students on Barry Buzan’s book “People, States and Fear” for a semester in my department at Dhaka University. One of the arguments of the scholars of Critical Security Studies is that when the state increases security, the security of the people decreases. The state not only provides security to its people, but also creates security problems for the people. The suppression of the country’s opposition opinion during the tenure of different governments is just one example. So not only the CHT, but Gaza, Mindanao, Patani, Arakan and many parts of the world prove how the state’s concept of “national security” can jeopardize the “security of the local people.”

However, we must also acknowledge that the CHT Accord signed by the Government of Bangladesh and the PCJSS is undoubtedly a time-honored history in the history of the world. I have studied the treaties of many countries of the world, but the CHT Accord is actually one of the best national gifts. This is because the Accord covers a wide range of issues, including the right to political self-government rights, women’s participation, land rights of indigenous Jumma people, employment rights, refugee resettlement, police and public administration. It is regrettable to think, such a best historic Accord will remain ineffective for 22 years, will be limited within the four meetings of the Accord Implementation Committee, will hang on the verandah of a weak Land Commission! Because this deal is a sign of our passion.

As many like me know, without this agreement, many of the current generation of Jumma people today might not be able to come to many other respectable social positions, including university professors, high-ranking government officials, bankers, NGO officials, businessmen. I will not hesitate to say that the government led by Hon’ble Prime Minister Sheikh Hasina has done a lot for the development of the CHT and the provision of mother tongue education to the indigenous peoples, although many problems still exist. In conclusion, we want everything, including universities, medical colleges and tourist centers, but first of all, 100 percent implementation of the CHT Accord is essential.

(Translated from Bengali to English by Hill Voice)

Conspiratorial allegations of copyright infringement against the Hill Voice continue