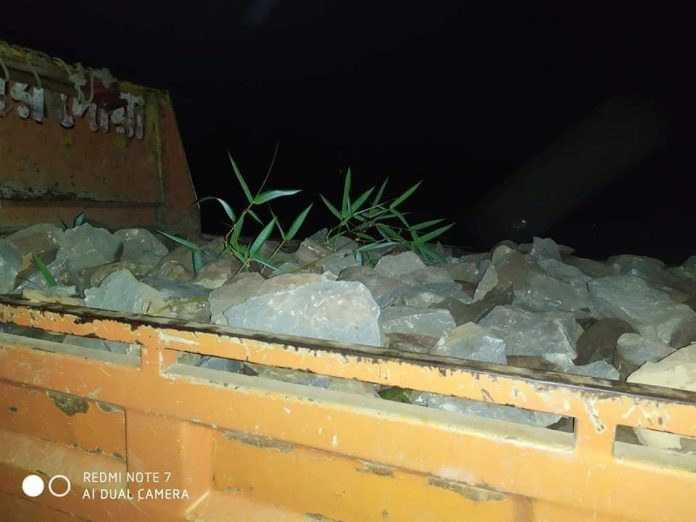 Hill Voice, 6 May 2020, Bandarban:  Thousands of cubic feet of stones are illegally being extracted by Joynal Abedin, a former president of Swechchasebak League, an associate organisation of ruling Awami League, every day from the area of ​​Nayapara Union of Tain Mouza in Alikadam Upazila of Bandarban District.

These influential stone thieves are cutting the hills and digging the soil to extract these stones. The forest department, police and army of Alikadam upazila seized thousands of cubic feet of stones and machines in a mobile court before four or five months.

Meanwhile, the administration of Alikadam upazila has been carrying out operation to seize the illegal stones from the beginning, but as it is now stopped, the stone smugglers have become reckless by taking the advantage of the COVID-19 epidemic situation and smuggling stones in broad daylight.

The investigation revealed that despite not having permits, they were lifting stones from Royambhu Jhiri and Nuna Jhiri in Royambhu area of ​​Alikadam upazila. There is no road permission to transport the stones and it is completely illegal to transport any stone from the mentioned place.

Hence it is completely illegal to extract the stones from any place in Alikadam Upazila. The local people of Jogendra village seized trucks full of stones during midnight and handed over to the Alikadam Police Station.

Joynal Abed, a local influential leader, is extracting thousands of cubic feet of stone daily from Nuna Jhiri of Tain Mouza, Roambu Khal, No. 1 Rehabilitation. They have piled up the stones near the Jhiris and all these stones are being smuggled by small trucks. Due to this, the balance of the environment is being damaged.

The investigation revealed that, the influential leaders of upazila Sadar has been extracting stones in Alikadam for the past one year. The villagers of Tanchangya community said that, they are facing various problems due to stone extraction.

They said, “Now there is not a single drop of water in any of the streams in summer season. Due to stone extraction all the Jhiris (streams) have dried up and died. How we will survive without water and when we protest against it, they threat and attack us.”

Every day, in addition to trucks, about one to two vehicles are loading stones and taking them for constructing the roads. Millions of cubic feet of stone have been stored in different places.

The people of Alikadam Upazila demand that, it will be possible to seize the stones and stop the extraction of stones only when the administration conduct raid. If the stone extraction is not stopped, the environment in Alikadam will be disrupted.

The eminent citizens expressed opinion that, if the stone extraction continues then the environment will be destroyed. The hill and forests will turn into desert, they added.