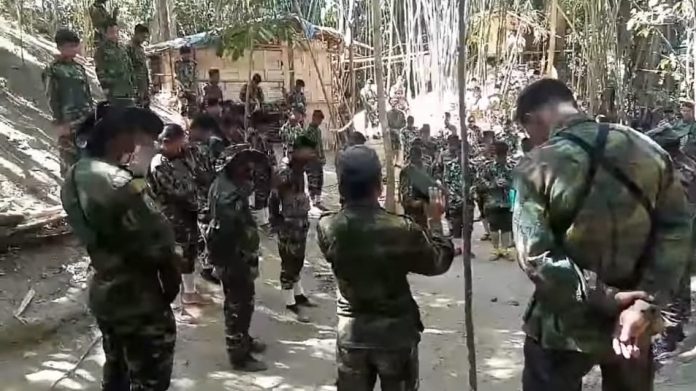 Hill Voice, 19 April 2022, Special Correspondent: Army and Islamist militants-backed armed terrorists of the Kuki-Chin National Front, widely known as the Bawm Party, have reportedly launched a betrayal surprise armed attack on the supporters of the Chittagong Hill Tracts (CHT) Accord. An innocent pro-accord man was reported killed in the attack.

The incident took place in the early hours of April 17, Sunday in the area of Bilpara / Saijam Para (Tanchangya Para) of Barthali Union of Bilaichari, bordering Ruma Upazila of Bandarban Hill District and Bilaichhari Upazila under Rangamati Hill District, according to local sources. The deceased has been identified as Action Chakma.

A local villager, who spoke on condition of anonymity, said, the armed attack was carried out without any provocation from the opponent side. He opined that the Bawm Party, with the help of the army and Islamist militants, started another armed conflict in the CHT as soon as the organization emerged.

According to local sources, a few days ago, some activists supporting the CHT Accord started organizing work in Barthali Union of Bilaichari bordering Ruma Upazila. On April 16, they spent the night at the house of a villager in Bilpara village.

At around 4:00 am on 17 April, armed terrorists of the Bawm Party carried out a surprise armed attack on pro-Accord activists without any provocation. An activist named Action Chakma was shot while going out the house to urinate. He was killed on the spot. Another innocent local villager was also reportedly injured.

He said that the demand for the rights that the Bawm Party is fighting for has to be realized by the government. That is why it was unthinkable that another group who are engaged in the movement would be come under attack by them so soon.

Bawm Party (KNF) claims responsibility for the attack and threatens:

The Bawm Party armed terrorists have not only claimed responsibility for the armed attack, but also continued to make threats. In another Facebook status posted on April 19, the Bawm Party terrorists threatened that “excessive exaggeration would lead to the resumption of the violent Kuki uprising in the CHT as in the past.”

Local sources further said that armed terrorists of the Bawm Party have been threatening the villagers of Barthali of Bilachari and Ruma upazilas that Chakma-Tanchangya, Marma and Tripura villagers would not be allowed to stay in the area. This has caused extreme frustration and fear in the area.

According to villagers, for the past few days, the armed terrorists of the Bawm Party have been roaming in the villages of Bilpara, Barekhyachara, Khangechara, Tiger Para etc. of Barthali Union. They were forcibly collecting rice, pigs, poultry etc. from the villagers and was harassing and threatening them in various ways. The locals are in extreme panic and anxiety.

It is to be noted that most of the residents of these villages are Jum farmers and hard-core poor. They do not have enough food grains or rice. The villagers have complained that the Bawm Party terrorists have been forcibly taking away the rice which is small amount that has been gathered. It has been alleged that the villagers rear some chickens and pigs and the terrorists take them away by force.

Not only that, for more than a year now, Bawm Party terrorists have been extorting money at gunpoint from every family in every Bawm villages. It is learnt that discussions were held on April 4 at a meeting of the Bawm Party held at Gilgal Bawm Para, 5 km away from Rowangchari Upazila Sadar, on how to increase the collection of donations from Bawm villages.

It was further alleged that not only extorting money by the Bawm Party from the people of Bawm community, but also the Reverend or Pastors of various churches were not exempted from the extortion of Bawm Party. They are also forcibly collecting donations from religious priests.

Bawm Party formation and campaign against CHT Accord and Chakma:

The Kuki-Chin Development Prganization (KNDO) was formed in 2008 by some opportunist and traitors of Bawm community with Nathan Bawm as president and Vanchunlian Bawm as general secretary, with the support of the army and Islamist militants based on the colonial policy of ‘divide and rule’. Later, in 2016, the organization was renamed the Kuki-Chin National Front, and its armed group, the Kuki-Chin National Army (KNA), was formed.

Soon after its formation, the organization launched a campaign of communal incitement against the CHT Accord and Parbatya Chattagram Jana Samhati Samiti (PCJSS) and against the Chakma community.

On December 30, 2021, Bawm Party’s own Facebook account, the Kuki-Chin National Front, announced that “the Chittagong Hill Tracts is not a Jummaland, it is a Kuki-Chin territory.”

The Facebook account further states, “The Chittagong Hill Tracts Peace Accord and the Regional Council they have formed is not for the Kuki-Chin people, it is just a Chakma agreement and a development council for the Chakma people.”

Bawm Party’s alliance with Islamists and station together:

The Bawm Party (KNF) and Jamayat-e-Arakan led by Shamim Mahfuz, a former JMB and Harkatul Jihad militant leader, have reportedly entered into an alliance. According to reliable sources, the armed members of Bawm Party and Jamayat-e-Arakan have been staying together setting up camp in the remote Remakri Pransa area of Ruma Upazila.

Reliable sources said that Islamic militant members had been removed from the Bawm Party camp and hidden nearby after the Hill Voice reported on April 4 that “Conspiring deal made between Jamaat-e-Arakan and the KNF”. In order to prevent anyone from seeing the Islamic militants, the Bawm Party terrorists forbade the Bawm villagers to go towards the Silaupi Para of Remakri Pransa Union in Ruma Upazila.

As a result, many Bawm villagers, including pastors, church elders and public representatives, who tried to visit relatives or preach religion in Silaupi Para, have been physically abused by the Bawm Party terrorists. Those who have been tortured by the Bawm Party are afraid to tell anyone about the physical abuse. Bawm Party terrorists have threatened to kill those who leaks reports of physical abuse. It is alleged that many have been compelled to swear or pledge in with taking rifle bullets in the mouth so that no one would expose the incident.