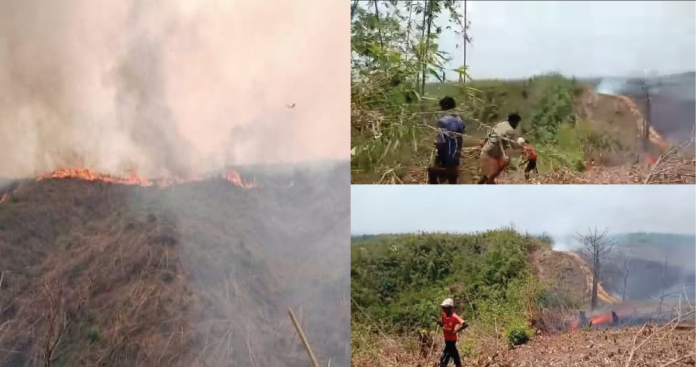 Hill Voice, 30 April 2022, Dhaka: On Friday, a statement signed by Saleh Ahmed, general secretary of Sammilita Samajik Andolan, on behalf of 28 eminent citizens, said that the rubber company had set fire to about 100 acres of Jum farm belonging to indigenous peoples in Langkom Mro Para of Lama upazila of Bandarban. The whole plantation including paddy, mango, banana, pineapple has been burnt.

The statement complained that although the land ownership of indigenous peoples of the plains was determined by the country’s existing law, the land ownership of the indigenous peoples in the three hill districts was social ownership. The principle of ‘universal property ownership rights’ is the basis of their land ownership. As a result, this proprietary lineage is verbal. It is managed by the Headmen and Karbaris of the hill tracts under three Circles. But in the last 30 years, the amount of land under the control of this hill tracts has decreased by 51 percent. In other words, more than half of the social ownership of the lands and land properties have been lost.

The statement further said, “We are deeply disappointed by the lack of visible action by the administration against the burning of Jum plantation in Langkom Mro Para of Lama Upazila. We are extremely concerned. Indigenous families affected by the fire are likely to face a food crisis soon. No action was taken by the local administration for justice or assurance to the affected families, which upset us.

The eminent citizens demanded an immediate and impartial investigation into the burning of about 100 acres of Jum plantations by the rubber company at Langkom Mro Para in Lama Upazila of Bandarban, immediate arrest of the culprits, safety of the victims and adequate compensation and ensuring the occupation of the Mro people in the neighborhoods.