Hill Voice, 22 June 2020, Sherpur:  The Garo hills of Sherpur district are being destroyed by cutting the hills and extracting stones illegally. These stones are being trafficked to different places. Even though all this is done with the connivance of a class of influential and forest department officials, it seems that no one is monitoring.

The eye-catching Garo hills are located over a large area of ​​Sherpur district bordering the country. At one time the Garo hills were severely damaged by the removal of stones by the government. Now that it is closed, the natural balance of the mountain is much restored.

But for some time now, with the connivance of an influential quarter and a class of dishonest officials of the forest department, stones are being extracted freely by cutting the hills. This is destroying the vegetation, destroying the natural balance of the Garo Hills.

Besides, the high top of the hill is collapsing due to cutting the bank of the small waterfall. Sometimes the forest department seizes some stones but it is just to show people.

If it looks at the matter of lifting stones on the spot, anybody can see that the stones are being lifted by cutting the hills at the day light. These stones are broken during the day and smuggled to different places at night.

Locals alleged that some local forest officials have been illegally extracting sand since they posted to this forest area, but they are not taking any action.

On the contrary, cases are filed against those who go to obstruct them. When asked about this, local bit officer Makrul Islam Akand admitted that the stones were smuggling due to lack of their manpower.

Rangtia Range Officer of the Forest Department. Ilishur Rahman denied the allegations against them, saying they were trying despite their lack of manpower. Asked about the names of those involved in the stone extraction, he declined to be named.

Meanwhile, Jhenaigati Upazila Nirbahi Officer Rubel Mahmud said he did not know about the stone extraction. He will take action soon. 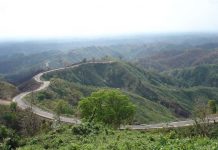