Special Report, Hill Voice, 29 June 2020, Chittagong Hill Tracts (CHT):  In an online discussion titled “Chittagong Hill Tracts Perspectives: Environment, Wildlife and Indigenous Peoples”, Creative Conservative Alliance (CCA) chief Shahriar Rahman Caesar avoided answering most of the basic questions raised about the activities of the CCA. On the other hand, he has threatened in the talks that any kind of hateful remarks against him will not be tolerated in the Facebook.

Today 29th June 2020 Monday from 4:30 pm, an online discussion titled “Chittagong Hill Tracts Perspectives: Environment, Wildlife and Indigenous Peoples” was held for about an hour and a half. Development activist Lelyhng Samthang (Lelung Khumi), Supriyo Chakma and Shahriar Rahman Caesar, head of the CCA, participated in the discussion which was facilitated by human rights activist Muktashree Chakma Sathi.

But Mr. Caesar has carefully avoided answering other basic questions except the questions like wildlife trafficking, indigo cultivation, signboard pulling etc. This means that he did not consider the basics at all in the adoption and implementation of his project.

At the last, when Leling Samthang repeatedly asked about the tactfully writing down of the minutes of the meeting taking possession of the Jumland in favor of the CCA, he said that he would explain the matter in bilateral talks with Lelyhng Samthang without giving a direct answer. This means that there is lack of transparency, that is why he could not answer in the open forum.

In response to the question of Muktashree Chakma Sathi, it was learnt that the NGO of Shahriar Rahman Caesar named CCA also does not have the registration with NGO Bureau. However, CCA is implementing the project in Alikadam-Thanchi with foreign funds. This means that he is carrying out activities illegally by bringing in foreign funds.

The latest issue raised by Shahriar Caesar is highly objectionable. He said racist hate remarks were being made against him on Facebook. He said he would not tolerate such racist remarks. However, he did not mention what kind of racist remarks were made.

This means that he did not understand the pain and emotions of the indigenous Jumma people, but rather he considered them as racial hatred. This means that he has not taken the allegations against him positively, but has taken them as a challenge. In the wake of this, he has threatened not to tolerate any kind of hateful remarks. 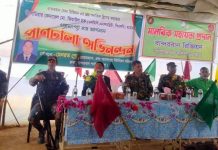 AL government in power, but country run by the army: Bandarban Brigade Commander