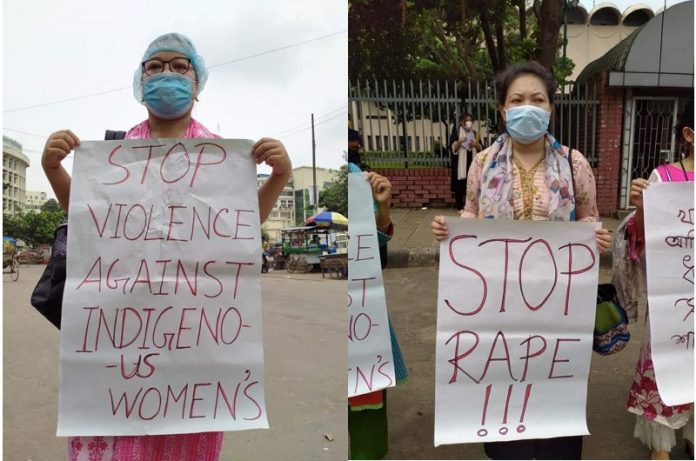 In recent times, the news of the gang rape of a Chakma woman has been a widely discussed topic among Bangladeshi Facebook users who use the platform to express their socio-political opinion. Many felt it was unnecessary to highlight the ethnic identity of the woman. Around the same time, a fourteen-year-old Hindu girl, Neela Ray has been stabbed to death by her Muslim stalker. Once again, many hold the opinion that it is wrong to mention the religion of the perpetrator and the victim. Those who are against mentioning the ethnic and religious identities feel that doing soon would contribute to social fragmentation. However, if we are to achieve social cohesion in Bangladesh, can we do that while denying incidents? Denial can’t bring social cohesion.

Coking back to the topic of “identity”, as a student of social science, I absolutely disagree with those who are against talking identity issues into account while discussing incidents of sexual violence against women belonging to minority communities. While it is no secret that the statistics regarding sexual violence in Bangladesh is horrifying, we must take identity issues into account when we are talking about minority women. I would like to elaborate on my argument through the theoretical framework of intersectionality.

The term intersectionality was coined by Kimberle Crenshaw. It is a theoretical concept that enables us to analyze how different identities possessed by individuals intersect and determine the discrimination and privilege they experience. In our respective societies or communities where we are living, our multiple identities-race, religion, gender, sexual orientation, ethnicity, and so on. Therefore, the sexual violence committed against the Chakma women or women belonging to minority religious or indigenous groups are often not committed based on lust only, it is also a weapon to exert Bengali supremacy of the perpetrators. The rise of toxic Bengali nationalism (which is also linked to bling devotion towards the Awami League, the current ruling party) and Islamic fundamentalism over the past decades have contributed to the continued oppression against indigenous communities in Bangladesh.

The indigenous community in Bangladesh has been subjected to discrimination in a plethora of ways from decades, and sexual violence and abduction of the women are regular occurrences. Starting from “Population Transfer Programme” in the late 1970s, they have endured not only social discrimination but has also been subjected to policies designed to deprive them of their basic rights as citizens and brutal oppression in the hands of the Bangladesh army from time. Common forms of abuse include abduction, eviction, arbitrary arrests, rape and there is very little hope for justice to this date. Under different regimes, the community has gone through episodes of oppression, and given this situation, we can’t deny the racist dimension to acts of sexual violence committed against the indigenous women in Bangladesh.

Therefore, in the case of indigenous communities in Bangladesh, when the women are assaulted or raped by the Bengalis, instead of being offended by the “ethnic” dimension to the cases, we should condemn those incidents, If we are really the civilized and enlightened individuals who wish to speak up and express their opinions, we must also open to the fact that some people from our own communities (whether national, ethnic or religious) are also committing heinous crimes. It does not make me lesser of a Bangladeshi or a Bengali if I express my solidarity towards the plight of indigenous communities in my country. As a Bengali, it makes me deeply ashamed to witness the everyday discrimination many indigenous people experience by my fellow Bengalis. As a Bangladeshi, it makes ashamed to acknowledge that the government of my country and the security forces are among the perpetrators.

It is not only the indigenous communities that bear the brunt of growing Islamic fundamentalism in the country. The Hindus, the Christians, the Buddhists, and the Ahmadiyyas are also regularly subjected to oppression. The Hindu women are often kidnapped and raped, or forcibly converted. I still can’t forget the story of Purnima, a Hindu woman who was gang-raped in 2001 when she was a teenager. In 2001, when the Bangladesh Nationalist Party came to power, the supporters led a systematic campaign of violence against the Hindus stating the they had voted for the Awami League (the current ruling party). However, it is not s singular incident. Such incidents continue to happen and there is no justice served. What makes it even worse for these women is that they are not just subjected sexual violence for being religious minorities, they are often outcasted by their own community, and find themselves abandoned, with nowhere to go. As a result, many resorts to committing suicide.

This phenomenon of course is not limited to Bangladesh. Rape has been used as a weapon in conflicts and wars for centuries. As women are considered in most societies as the symbols of honor of their families and communities, they are targeted by the enemy groups in times of wars and conflicts. To humiliate a woman, to violate the dignity of a woman means, in the eyes of the “enemies”, is to dishonor her entire community. This has been happening all across the world, for centuries.

I fell outraged and ashamed as a Bangladeshi woman. As a Bangladeshi woman, I have never fully felt safe in my country-given a lot of factors relation to my identity and choices. But given that I am a Bengali, I have at least I have never been subjected to racist slurs in Bangladesh for looking different than others- I have not had to experience an extra bit of perverted attention from men for belonging to a different ethnic group and this is where the two cents of ethnic privilege comes in. Thus, we must talk about “identity” we can’t resort to generalizing and living in denial.

Shucheesmita Simonti: She is working as the editor of Women Chapter’s English site.