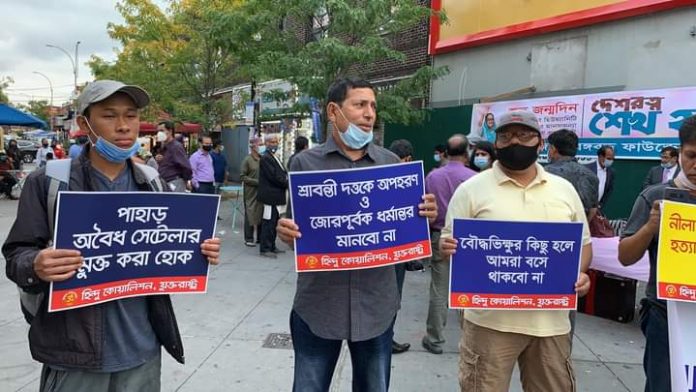 Hill Voice, 28 September 2020, New York: Protest rally has been held in New York of USA by the Hindu Coalition-United States to protest against ongoing persecution of minorities in Bangladesh. The rally was held on 27 September 2020 Sunday at 4:00 pm at Jackson Heights in New York.

The Hindu, Barua community living in New York as well as the Jumma people attended this protest rally. Demonstrators chanted and displayed placards, ‘Lets the hills free from illegal settlers’, ‘Will not accept the abduction and forcible conversion of Shrabanti Danta’, ‘Stop Bangladesh Military Aggression in CHT’, Stop Taking Minority’s Land Away’, ‘Stop the Settlement in Chittagong Hill Tracts’, etc. 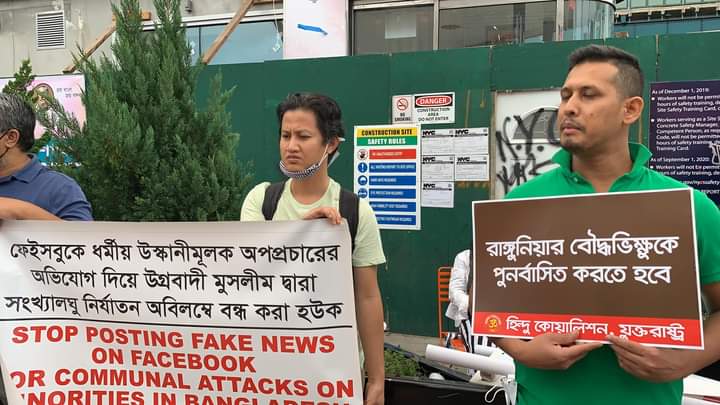 Sitangshu Guha, President of the Hindu-Buddhist-Christian Unity Council of New York, Mong A prue Marma, on behalf of the Jumma community and Siddhartha Barua from the Barua community spoke in the protest rally.

The demonstration protested against the state’s failure to the persecution of minority women in Bangladesh, gang-rape of a mentally handicapped Jumma woman in Khagrachari, atrocities and human rights violations upon the religious minorities. It was demanded that these incidents be stopped and the real culprits be brought to justice.