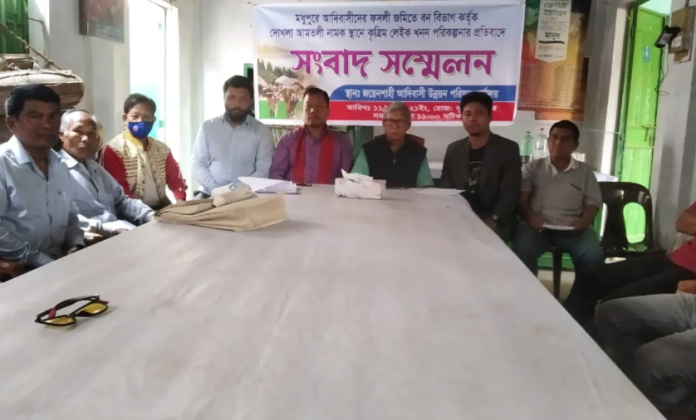 Hill Voice, 11 November 2021, Tangail: Indigenous organizations have protested against the plan of digging an artificial lake by occupying the crop lands of the indigenous peoples in Madhupur of Tangail.

The press conference was moderated by John Jetra, President of the Bagasas Central Council, and the key address was delivered by Liang Richil, Secretary of the Central Committee of the Garo Student Federation. Former President of GMADC Ajay A. Mree, Mrs. Mebul Daru, Gouranga Barman, Harid Simsang, Prabin Chisim, Nere Nabat Dalbat, among others, were present in the press conference.

Speakers at the press conference said that we, the indigenous people living in Madhupur, have come to know through reliable sources that the forest department has decided to dig artificial lakes on the three crop lands of the indigenous peoples, at the place called Amtali of Pirgacha Mouza of No. 11 Sholakuri Union near Chunia, Pegamari, Pirgacha, Sainamari, Bhutia and Thanarbaid villages inhabited by the indigenous peoples of Madhupur of Tangail, for the purpose of entertaining the local and foreign tourists.

The speakers further said that we totally disagree with the Forest Department’s suicidal plan and pledge to resist it with all our might the cooperation of all the indigenous peoples in the area if the lake is dug in the land owned by us and recorded land in the ROR record.

It was also said at the press conference that the budget allocated for the proposed excavation of this lake should be implemented elsewhere. For example, in Rasulpur area or other areas where there is land occupied by the forest department, which will not harm the livelihood of the indigenous peoples.

If the forest department does not withdraw from the lake excavation project despite the objections of the indigenous peoples, it will not only be a violation of human rights, but also a violation of the country’s constitution and many positive steps and commitments of the present Prime Minister and government. The speakers also said that there would also be violation of UN and international human rights law.