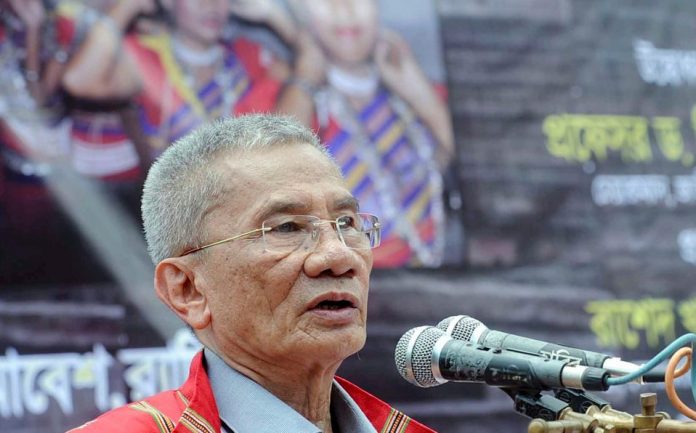 Hill Voice, 9 August 2020, Dhaka:  On the occasion of International Day of the World’s Indigenous People, Jyotirindra Bodhipriya Larma (Santu Larma), President of Bangladesh Indigenous Peoples Forum (BIPF), conveyed his best wishes and congratulations to all the freedom-loving people of the world, including Bangladesh. He called upon all concerned, including the government, and the progressive, democratic and non-communal forces of the country to come forward for the protection and promotion of the basic human rights of the indigenous peoples and to stand by the indigenous communities.

At the beginning of the virtual discussion of the Bangladesh Indigenous Peoples Forum, which started at 5 pm on Sunday, 9 August 2020, Pramila Mainthein, a member of the BIPF, read out the greeting message of Jyotirindra Bodhipriya Larma, President of the Forum. Santu Larma’s greeting message titled ‘Few Words’ was given below-

“The International Day of the World’s Indigenous People declared by the United Nations has come among us again. On this great day, on behalf of the Bangladesh Indigenous Peoples Forum, I would like to extend my best wishes and congratulations to all the freedom-loving people of the world, including Bangladesh. This day is a day of awakening and uniting in the struggle for the rights of the indigenous peoples. This day is a special inspiration day.

The government is trying to stand by the people through various programs, but due to corruption, sectarianism, partisanship and misrule, marginalized people are not getting the expected benefits. Moreover, government relief in remote hilly and indigenous areas is not reaching adequate levels. I call on the government to provide special financial incentives for the indigenous peoples affected by the Corona epidemic.

It is very sad that, the human rights situation of the indigenous peoples in the country is still not good. In different parts of the country, there has been an increase in communal attacks on indigenous peoples, land grabbing and evictions, torture and violence against indigenous women aiming at encroaching on their lands and evicting them from their traditional lands.

The present government promised full implementation of the Chittagong Hill Tracts (CHT) Accord. But even in last 22 years, the basic issues of the Accord have not been implemented properly. In particular, the Land Commission has remained completely ineffective. Despite repeated demands, no effective roadmap has been announced for the implementation of the CHT Accord. All the temporary camps including de facto military rule Operation Uttoron, were not withdrawn. As a result, the existence of the indigenous Jumma people is almost extinct and almost uncertain today.

It is needless to say, Bangladesh is a diverse country of many nations, many languages, many cultures. In addition to the majority Bengali population, more than 3 million indigenous people have been living in this country since time immemorial. Their lives, traditions, culture, history and aspirations are deeply intertwined with Bangladesh. Indigenous peoples have a glorious role in all democratic movements of the country including the liberation war of 1971. They are deeply involved with millions of people in Bangladesh.

The language and culture of the indigenous peoples of Bangladesh have enriched the cultural diversity of this country. Indigenous culture and values ​​have developed with forests, environment, biodiversity, land and hill-nature. Indigenous life and culture are environmentally friendly. But it is a matter of concern that today their environmentally friendly culture and way of life is being endangered by the massive aggression of the majority population and the strong tide of globalization.

Today, on International Day of the World’s Indigenous Peoples, I call on all concerned, including the government, to come forward to protect and promote the basic human rights of indigenous peoples. Besides, on the Indigenous Day, Iappeal to the progressive, democratic and non-communal forces of the country to stand by the indigenous peoples.

Finally, let us continue the struggle for the establishment of the right to self-determination of all the rights-deprivedpeople of the world, including the exploited, oppressed and deprived indigenous peoples of this country.