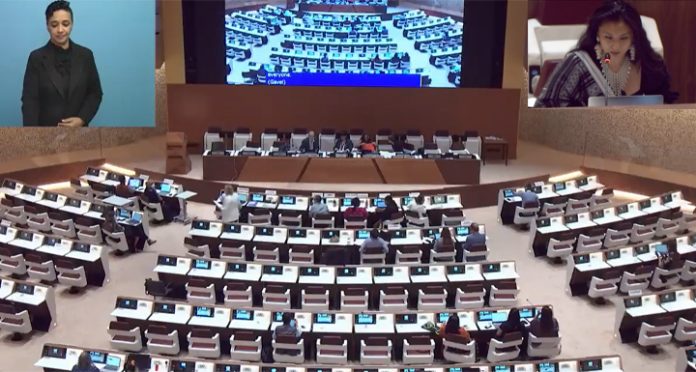 She made this call at the 15th session of the Expert Mechanism on the Rights of Indigenous Peoples of the United Nations Human Rights Council participating in the agenda item 10: Future work of the Expert Mechanism, including focus of future thematic studies (Closed Meeting with indigenous peoples) held in Geneva on 7 July 2022.

Full Text of Statement of Augustina Chakma is given below:

Thank you Chair for giving me the floor.

In the statements made at the current session of the EMRIP, we, the indigenous representatives of Bangladesh, mentioned that the present government has adopted a policy of military solution instead of political and peaceful solution to the Chittagong Hill Tracts (CHT) problem through the implementation of the CHT Accord signed in 1997.

In this case, I am giving an example of an incident that took place on July 5th 2022 in CHT. Bengali settlers set on fire, looted and vandalized 37 houses of Indigenous Jumma villagers in Mahalchari upazila of Khagrachari district. At least two Jumma villagers were reportedly injured while trying to resist the attackers.

During this arson attack, army and law-enforcement personnel were present at the scene but did not take any action against the attacking settlers to refrain them.
We can infer that this arson incident took place with the direct help of the army. The main purpose of setting fire to the houses of the Jumma villagers is to evict the Jumma people and occupy their lands.

In fact, the army is the main obstacle to the implementation of the CHT Accord and the political solution of the CHT problem at the behest of the government.

Therefore, in order to solve the CHT problem, there is no alternative but to withdraw all the temporary camps of the army from the CHT, including de facto military rule called ‘Operation Uttaran’.

In this circumstance, I would like to appeal to the Expert Mechanism and the Human Rights Council to put pressure on the government of Bangladesh to implement the recommendations from the United Nations Permanent Forum on Indigenous Issues.

This was adopted in 2011 on the implementation of the CHT Accord and screening of human rights record of military personnel and units prior to serving in the UN Peace Keeping Operations.

Thank you once again for the floor.

‘Allegation of ambush by PCJSS on fleeing Bawm villagers is baseless’