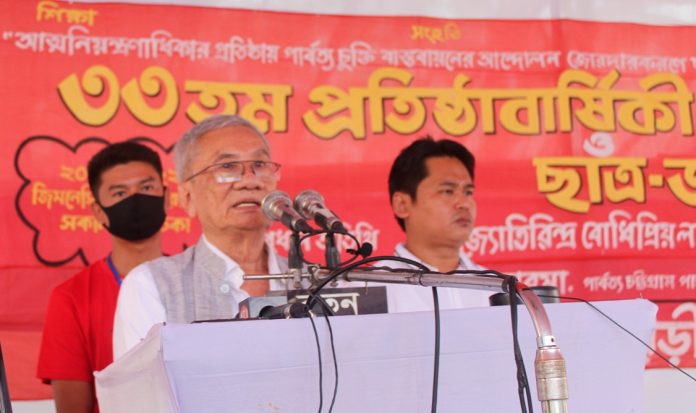 Hill Voice, May 20, 2022, Rangamati: Jyotirindra Bodhipriya Larma (Santu Larma), president of the Parbatya Chattagram Jana Samhati Samiti (PCJSS) and one of the signatories to the Chittagong Hill Tracts (CHT) Accord has said that there is no room in waiting for the government to implement the agreement. Instead, he called on the leaders of the Pahari Chatra Parishad (Hill Student Council) to shoulder the historic responsibility and intensify the movement in the coming days.

He said this while addressing a student and mass gathering in Rangamati on the occasion of 33rd founding anniversary of Parbatya Chattagram Pahari Chatra Parishad (PCP) and called on for greater movement.

The PCP organized this student-mass gathering at the Gymnasium premises of Rangamati town. At the beginning of the rally, the national anthem and the party anthem of the organization were performed as well as the national and the party flag were hoisted. After that, Professor Mong Shanoo Chowdhury, a renowned educationist of the hills inaugurated the 33rd founding anniversary and 26th Central Council of PCP by flying balloons. The meeting was then presided over by Sumon Marma, Central President of PCP and moderated by Nipon Tripura, General Secretary of PCP. 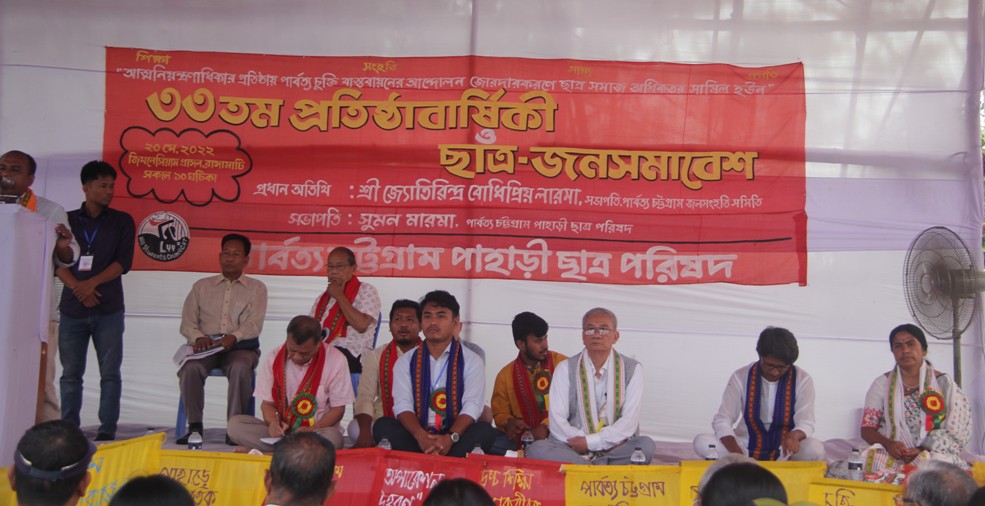 Congratulating all those who have been involved in the struggle for the rights of the Jumma peoples since the founding of PCP till today and who have been involved in establishing the people’s right to self-determination by accepting the sacrifice, chief guest Santu Larma said that the Jumma Student Society of the hills, led by M N Larma also protested against the Kaptai Dam. But the movement did not succeed because of the decaying feudal leadership at that time. After that a new political leadership was built up under the leadership of Pahari Chatra Samiti. Later the protest of the Longadu massacre in 1989 which united the student-youth community in the hills, as a result of which was born the PCP, the 33-year history of this must be remembered today.

He said that the reality during the rule of Pakistan is the same even after the independence of Bangladesh. The Pakistani government, by undermining the CHT Regulation of 1900 introduced by the British, started the act of wiping out the Jumma peoples through construction of the Kaptai Dam. In its continuation, during the rule of Bangladesh, the Constitution of 1972 denied the distinct culture of the Jumma peoples of the hilly region and said that the Jummas are constitutionally called as Bengalis. The ruling parties of Bangladesh at first proclaimed ‘Operation Dabanal’ (Operation Wildfire)’ in the CHT and then ‘Operation Uttoran’ (Operation Upliftment) in 2001.

Santu Larma further said that now 25 years have elapsed since the signing of the CHT Accord. Even in 25 years, the Bangladesh government has not felt it that the special military rule that has made the hill disturbance area by declaring ‘Operation Uttoron’ in the hills needs to revoke. On the contrary, we have seen that the oppression and deprivation by the ruling classes in the hills has gradually been accelerated. We are forced to live in a state where even though we have hands, feet, eyesight, intelligence and feeling for our homeland and homesteads we cannot express it in any way today.

He said the age of the CHT Accords is going to be 25 years now. Before the signing of the Accord, the struggle of PCP started. Even before that, during the partition of India and also at the time of the Kaptai Dam, there were protests by hill students. So far, the leaders of PCP have been waging movement for the protection of their homeland and their homesteads. He hoped that the leaders of PCP would think more deeply on the 33rd founding anniversary and take this fight forward. 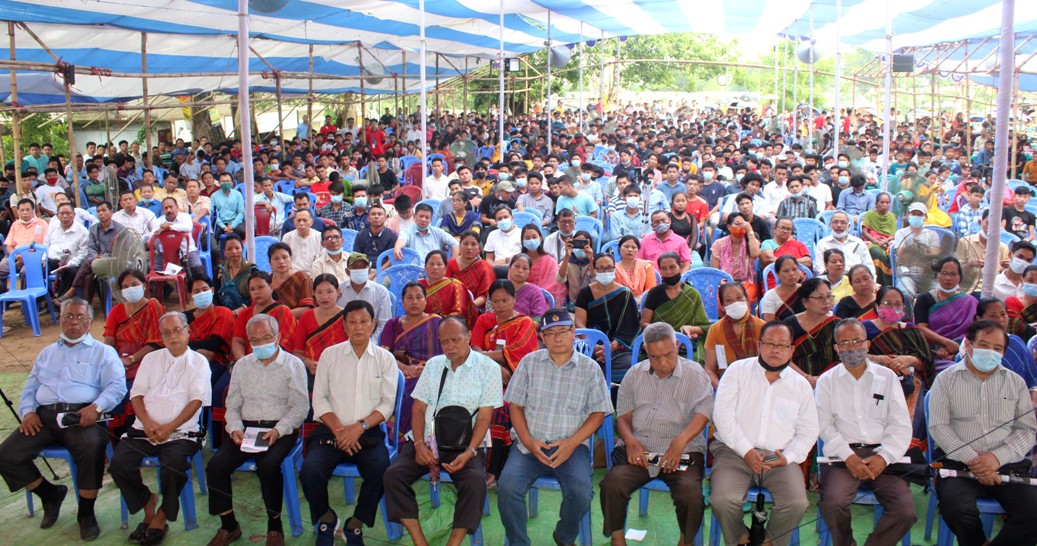 Professor Mong Shanoo Chowdhury who inaugurated the conference, said ‘PCP is not just an organization, it is the hope of the disenfranchised Jumma peoples.’ The Jumma peoples were united under the undisputed leadership of Manabendra Narayan Larma. The student body needs to be more active and vocal in establishing the rights of the Jumma peoples.’

Special guest of the event Professor of the Department of Anthropology of Dhaka University Jobaida Nasreen recalls, ‘I am a woman and behind me there are various contributions of the indigenous hill peoples. My life, the generosity of life, the greatness of life I have learned from the hill people.’

She said, ‘Those who keep pace with the ruling party that there are no indigenous peoples in this country they have no space in this region. You also have to recognise the leader. Don’t be with those who will not protest of your persecution. Manabendra Narayan Larma has made it clear to the people of the region that there is no way but liberation.’

The DU professor further added, ‘The state only measures development with buildings and roads. If there is a road today, you will come, tomorrow ten more will come, the day after tomorrow it will be filled with the army. Without taking photographs in Lusai attire you need to ask where the Lusai went after eviction. Besides, before Indigenous Peoples’ Day, a letter comes to our department asking us not to use the word ‘Adivasi (indigenous)’.’ She also questioned what extent of the presence of forest-nature-language-culture in the education system in which indigenous children have been studying.

Prominent journalist Nazrul Kabir said, ‘The CHT Accord is about to complete a silver lining. The Prime Minister has been awarded the UNESCO Peace Prize for signing the Accord. She promised to solve the problem of CHT through implementation of the accord but did not keep her words. If the government wants to use its political will to implement the CHT Accord, there is still time.’

Prominent educationist Shishir Chakma said, ‘The government has not yet taken steps to solve the land problem, the main issues of the CHT problem. The main source of the livelihood of the Jumma peoples in Lama has been burnt. There is frustration among the Jumma peoples over the government’s delay in implementing the Accord. Hundreds of incidents have been constantly happening in the CHT but are not coming in the media. PCP is a student organization fighting for the rights of Jumma peoples. Under the leadership of PCP, the student society has to take up the struggle against oppression and torture.’

Tony Matthew Chiran, organizing secretary of the Indigenous Youth Forum, said, ‘Fascist-style repression is still going on in Bangladesh, especially in the CHT. The present government is doing the acts of ethnic cleansing very efficiently. Against that the PCP was always vocal against it in the streets and still on. Indigenous students of the plains have always been and will continue to be with the PCP in this fight.’ He appealed to the people of the democratic and non-communal minds in Bangladesh to join the movement of the Jumma peoples of the hills.

At the gathering, president of Student Union Fayez Ullah said, ‘Education in the CHT is in a dilapidated state. The education system in Bangladesh has not yet become secular. On the other hand, education, health, everything has been swallowed up in the hills. Above all plots of evicting the Jumma peoples by building a five-star hotel is underway.’ He called for the construction of a five-star hospital instead of a five-star hotel.

Jagadish Chakma, Organizing Secretary of PCP gave the welcome speech at the gathering. In his speech, he said, ‘The PCP was born out of protest against the kind of oppression that has historically been inflicted on the Jumma peoples of the hills. The repression and suppression of the ruling classes still continues. The PCP wants to take oath to strengthen the movement of tomorrow through today’s rally against the ongoing persecution.’  The student leader expressed his firm belief that the PCP would continue to play its historic role in the movement for the implementation of the Freedom Charter of Jumma peoples, the CHT Accord.

The rally ended with a concluding speech by Sumon Marma, President of PCP. At the end of the rally, a procession started from the Gymnasium, paraded Banarupa petrol pump and ended at the Gymnasium premises.