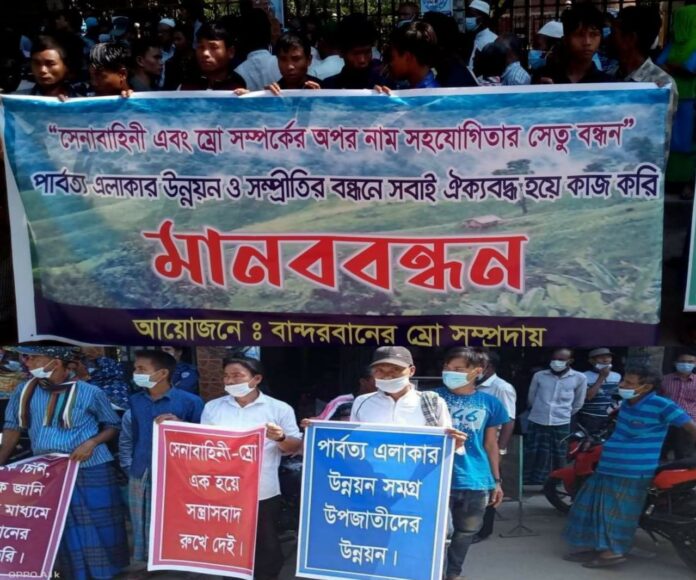 Hill Voice, 17 November 2020, Bandarban: Allegation reveals that the army in league with the communal groups, under intimidation, coerced the indigenous Mro people to stage a human chain in favor of the five-star hotel under-construction by the army in Bandarban town of the hill district.

It has been learnt that the mocked human-chain has been organized to direct the event towards different course and to conceal the storm of massive protest and condemnation expressed by the conscious personalities including the indigenous Mro people at home and in abroad against construction of five star hotel and amusement park jointly initiated by the army and Sikder group, a private entrepreneur that has earned a very bad reputation, while evicting the indigenous Mro people from their ancestral lands and homesteads in the Chimbuk Hill.

The bogus human chain firstly was staged at Alikadam Upazila Sadar at 7:00 am and secondly, was organized in front of the Bandarban Press Club of Bandarban municipality at 11:00 am today, the 17 November 2020. During show-down of the human chain, the participants were obliged to read out the written statement supplied by the army and Directorate General of Forces Intelligence (DGFI) and speak in favor of the army and the controversial five-star hotel and amusement park construction projects. Besides, in place of having written about eviction of the Mro people in the banners, placards and festoons, they contain: ‘Another name for the relationship between the army and the army is the bridge of cooperation’, ‘Let’s fight together against the propaganda of Mro-army relations’, ‘Tourism in the mountains is development of Mro people’, etc. slogans void of content and of motivated. 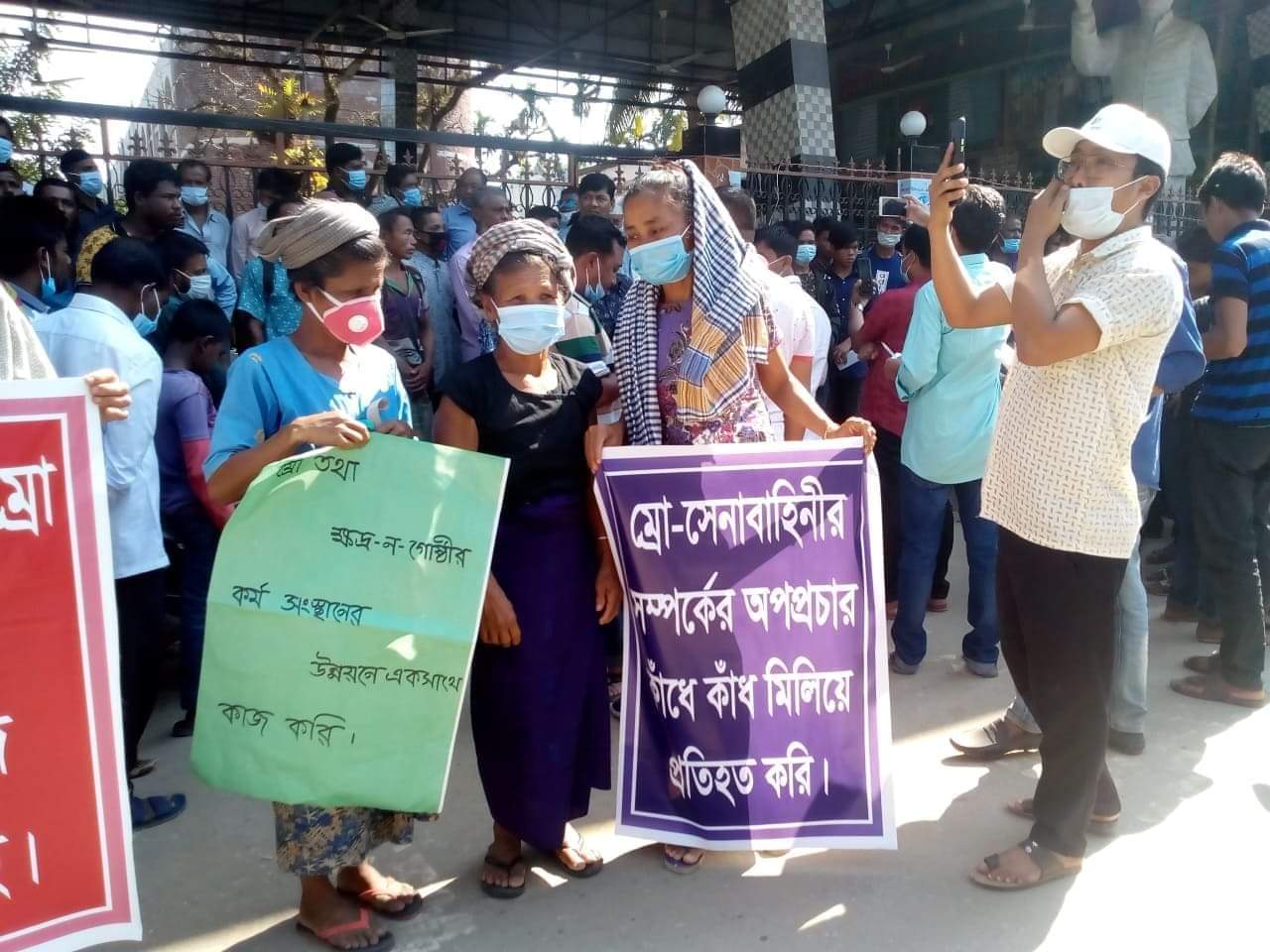 Noticeable was the wide presence of DGFI and various intelligence staff around the human chain. On the other hand, among many others, participation of Kazi Mujibur Rahman, leader of Chittagong Hill Tracts Citizens’ Council (army-backed communal organization of Muslim Bengali settlers) was also sighted in the human chain of Bandarban district headquarters. It did not confine to that extent, attended in the army-arranged mock occasion moderated by Jibon Tripura was Md. Kazi Mujibur Rahman, Central Vice-President of CHT Citizens Council and well-known land grabber who occupied the lands belonging to the Mro and Chak indigenous people on various occasions.

Unfortunately, behind this heinous effort of army and Muslim Bengali settlers, several opportunist leaders and a few brokers of Mro people are being seen in the collaboration. The few collaborators who have got themselves engaged in the conspiracy of the army and Muslim-Bengali settlers and playing treacherous role are: Purna Chandra Mro, Chairman of Tonkaboti Union Council and member of the ruling party, Mansar Mro, Khonglai Mro, Ranglai Mro and Syong Young Mro, member of the Bandarban Hill District Council and member of ruling Awami League, Younglok Mro of Alikadam including Solmon Mro, Medon Mro and Pachchhing Mro.

According to the local sources: the army and DGFI became lively to organize the human chain since yesterday. They resorted to a pressure policy letting some agents and collaborator to create pressure upon the Mro people living in different areas including the Chimbuk Hill and Alikadam areas stating that they would have to go to human chain. They also allured of various opportunities and facilities. But when the ordinary Mro villagers declined to go; they were intimidated. This created manic among the Mro people.

It has been learnt that at last the Mro people living in Chimbuk Hill did not agree to join the human chain. But the occasion of human chain at Alikadam was held with the local Mro people. Afterward, the same Mro villagers of Alikadam were boarded in 3 hired buses and taken to Bandarban sadar with whom the human chain was organized. The source confirmed that Taka 1000 to 1500 was paid to each of the participants.

It has been learnt that Younglok Mro and Menden Mro were called to report to Alikadam Army Zone 39 Bir Headquarters this morning. It is to be mentioned that Younglok Mro is the Director of Mro Residential institution of Alikadam Upazila and Menden Mro is Commander of local Village Defense Police. Giving some money, the army asked the duo to gather Mro people there. The army had a briefing with the Mro people gathered instructing that they would have to speak in favor of five star hotel and categorically they would have to say that the army is not involved in the hotel affairs.

The source also informed that though the army and DGFI had an attempt to collect 250 to 300 Mro villagers, yet at last some 70 to 100 villagers were there with whom the human chain was held. A look at the faces of the Mro people standing in the human chain reveal that none of them had participated consciously and spontaneously. During the occasion they looked very non-energetic, unmindful and anxious. Face of each of the participant Mro people looked to be helpless.

Reng Young Mro Nangchen, a student leader studying in university, in his Facebook status writes: “… copies of the statement were supplied to Alikadam at night. One or two Mro men, capable of reading Bengali a little, were chosen and compelled to read out. At night, I had spoken with the two persons who were chosen as speakers. They were not willing to go the next day by no circumstance. They expressed their helplessness.”

“Under exertion of various pressure, the Mro people were picked up and taken to Bandarban by 3 buses. They were handed over banners and placards and made the human chain.”

He further writes: “We are in fear; we cannot speak our own issues. We feel endangered and helpless… the exact relationship of the army with the land grabbers, eviction of the Mro people, tourism and Sikder Group needs to be clarified.”

Blogger Pychingmong Marma, in his Facebook status writes: “The human chain program is going to be held under supervision of Army Intelligence in Bandarban. This occasion has been organized as to clean their own image and to make the water muddy. All expenses and arrangement of the occasion are being looked after by the army. Some 100 indigenous people have been collected from Alikadam. This is a counter showdown. Money is being spent exuberantly in all the account heads including transport and leafleting – the showdown drama is being staged.”

One Mro student in anonymity said: “Yesterday, when the indigenous student and masses intended to organize a protest rally against the land occupation by the army, the army directly prevented them and threatened them of dire consequences. Whereas, it is they who are forcing for human chain.”

Chyaung Young Mro, General Secretary of Bangladesh Mro Students Association said: “Today’s human chain is absolutely a projected lie and arranged event. This, by no way, does reflect the statement of the Mro inhabitants of the Chimbuk Hill and the whole Mro community as well. The entire Mro community is ready to plunge into the movement to stop the construction of five-star hotel and tourism centers by eviction of the Mro people from Chimbuk.”

Alik Mree, General Secretary of Bangladesh Indigenous Student Action Council said: “The security force has organized the human chain, with a view to flowing the course of on-going movement against establishing tourism centers by way of evicting the Mro people, towards different direction.”

Nipon Tripura, Organising Secretary of Hill Students’ Council said: “The human chain has been a motivated move in a bid to legalize the way of constructing the five-star hotel and tourism center, a joint venture of the security force and Sikder group; to make controversial of the on-going movement of Mro people for closure of construction of the five-star hotel and tourism center; and to confuse the public opinion. But the movement of the Mro people will be continuing. The solidarity of Pahari Chhatra Porishad (Hill Students’ Council) will be with their programs.” 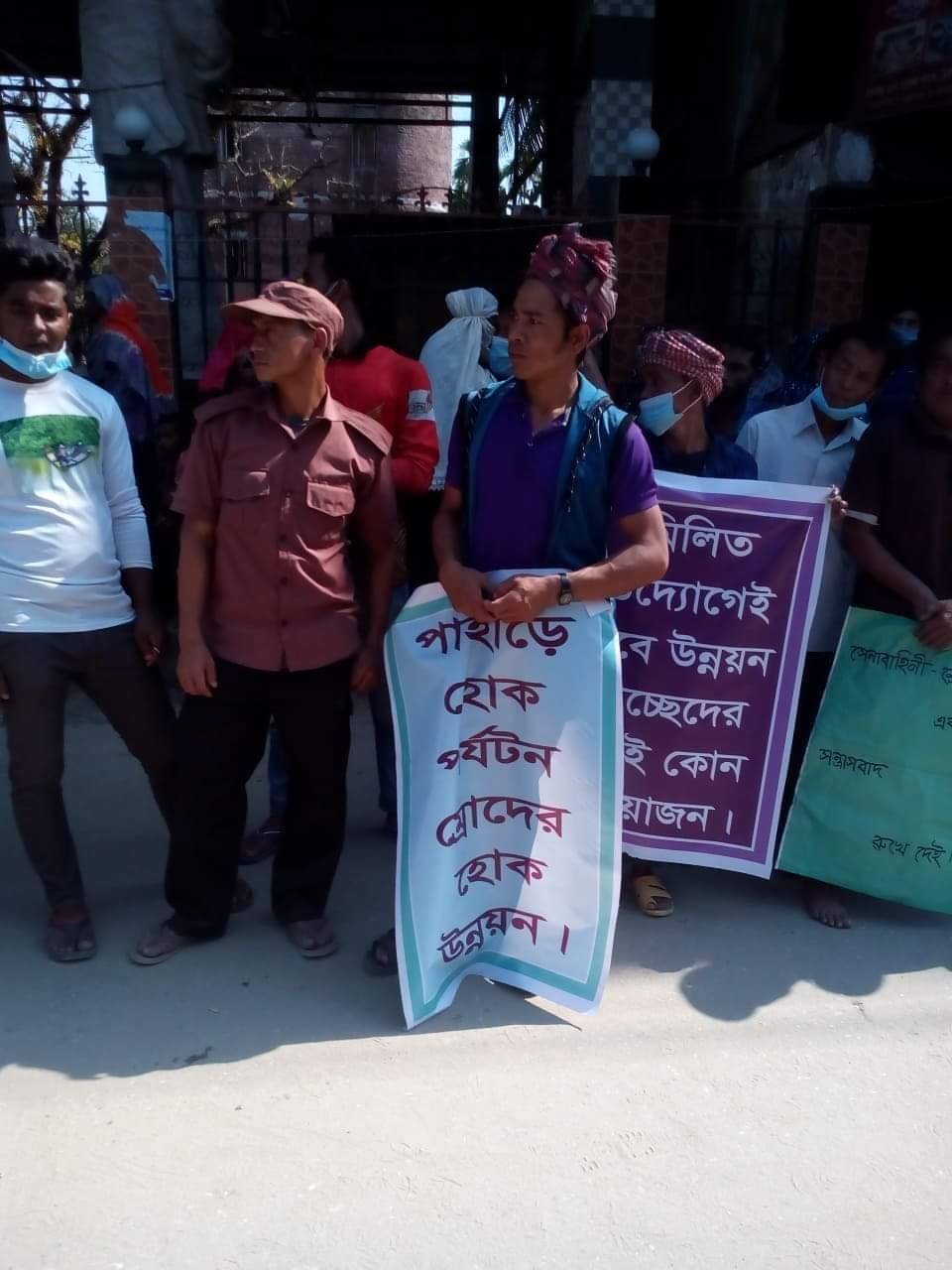 An eye witness residing in Bandarban said: “If one belongs to Mro, he has to have a long hair like a female. Some known faces of Marma people also have been sighted in the human chain.” Further he said: “Participants in the human chain constitute 80% Marma, Chakma, Tripura and Khyang communities, 10% Bengali and 10% Mro people.”

Expressing resentment, some citizen and rights activists said: “This initiative of compelling the Mro people to act against interest of the Mro community is an extreme manifestation of heinous indignation of human rights and negative outlook towards the indigenous people.”

It is worthy to be mentioned that an ill-effort is on to occupy Jum cultivation lands measuring approximately 1,000 hectors in Chimbuk hill of Bandarban Sadar Upazila, in the name of construction of five-star hotel and tourism center under joint initiative of Sikder group and Army Welfare Trust. On implementation of this project, directly 4 Mro villages will be affected and 70 to 116 villages will be indirectly affected while some10,000 Jum cultivators will be at risk of eviction.