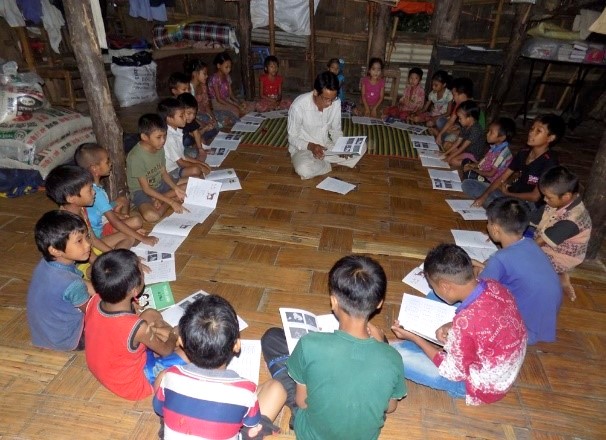 The benevolent work bears a special significance as this year’s International Day of the World’s Indigenous Peoples today is dedicated to their languages in view of the United Nations’ declaration of 2019 as the International Year of Indigenous Languages.

“I feel happy when I see these children are learning their school lessons through their mother tongue very easily,” said Menpoy, 48, a farmer by profession and also a ‘self-educated’ man.

“I dream of a day when no children of our community will be deprived of schooling due to language problem. If the government arrange Mro mother tongue-based multi-lingual education in remote hill schools these children,” he added.

“I read books in my mother language with joy but in our school only Bangla is used, which I don’t understand well,” said Tonpaw Mro, a Class II student of a local NGO-run school at Cramadi Para.

On Tuesday evening, Tonpaw and Csong along with 33 other Mro children were found learning in their mother tongue at Menpoy’s Cramadi Para house.

They were chanting different letters, rhymes, and even the national anthem in their own language, a different scene in the remote hill area.

There are around 65,000 Mro people in Bandarban, said Sing Young Mro, a writer of Mro community in Bandarban.

Every year many students belonging to ethnic communities including Mro drop out at the primary level mainly due to language barrier, said Sing Young.

Tong Lok Mro, a Class V student of Mro Residential School, said, “We want to study in our own language and ask questions with ease to learn properly.”

“We have already distributed around 10,000 books in Chakma, Marma and Kokborok (Tripura) languages for pre-primary, Class I and Class II students of Bandarban but we have very few skilled teachers to teach them properly,” said Tabibur Rahman, the district’s primary education officer.

The government initiative should also include arrangement of lessons in other ethnic languages in the district, including Lusai, Khumi, Pangkua, Kyang and Chak, which are facing the threat of extinction,” said Lelung Khumi, a development worker in the district.

It is estimated that, every two weeks, a language belonging to indigenous people disappears from the world, placing at risk the respective cultures and knowledge systems.

Against the backdrop, the goal of this year’s International Day of the World’s Indigenous Peoples is to draw attention to the critical loss of indigenous languages and the urgent need to preserve, revitalize and promote them at both national and international levels. 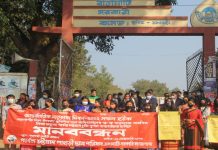 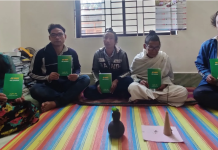