Hill Voice, 01 August 2020, Dhaka:  August 9 is International Day of the World’s Indigenous Peoples. As always, on the occasion of the Indigenous Day, many organizations in Bangladesh have started various programs at the national and local levels this year. However, due to the ongoing COVID-19 epidemic worldwide, most of the programs will be online based discussion meetings and cultural events. However, limited gatherings, submission of memorandums and cultural events will also be held. Posters, souvenirs, supplementary page, leaflets, etc. will also be published.

It may be recalled that August 9 was declared as the International Day of the World’s indigenous Peoples by a resolution of the UN General Assembly in 1994.

The first meeting of the Working Committee on Indigenous Populations which was set up under the UN ‘Sub-Commission on Prevention of Discrimination and Protection of Minorities’ was held on 9 August 1982, the first formal meeting in the UN system on Indigenous Peoples. To commemorate that day, the United Nations declared August 9 as International Day of the World’s Indigenous Peoples to protect and promote the rights of indigenous peoples around the world.

Regarding the theme, the United Nations has stated that the link between environmental damage and pandemics is well known to leading research organizations. But there is yet another group of experts, who have been worrying about the threat of a pandemic even before COVID-19: indigenous peoples. As we fight against the spread of the pandemic, it is more important than ever to safeguard indigenous peoples and their knowledge. Their territories are home to 80% of the world’s biodiversity and they can teach us much about how to rebalance our relationship with nature and reduce the risk of future pandemics. Indigenous peoples are seeking their own solutions to this pandemic. They are taking action and using traditional knowledge and practices such as voluntary isolation, and sealing off their territories, as well as preventive measures. 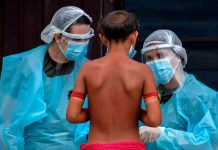 How Covid-19 could destroy indigenous communities