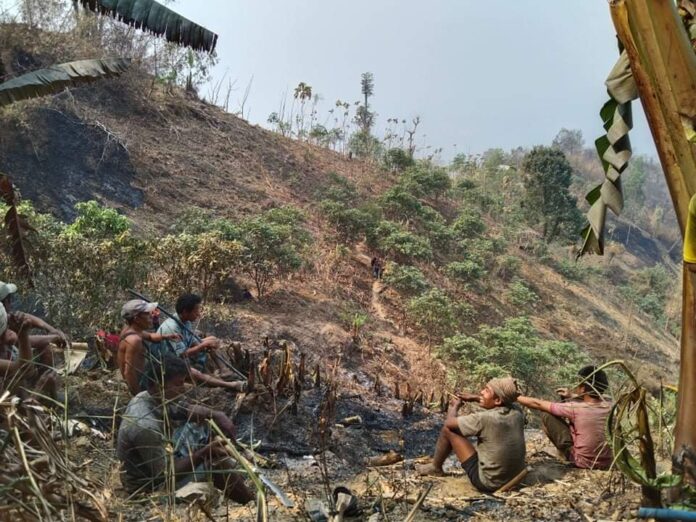 Hill Voice, 24 March 2021, Bandarban: It has been alleged that the fire set by stone traders has burnt to ashes more than 50 plantations and vast Jum lands of indigenous Mros in the Chimbuk hill of Bandarban Hill District.

It is learnt that on March 22-23, 2021, a two-day long blaze destroyed 50-60 plantations and many jum lands in five villages of the Mro community in Chimbuk. Many villagers are specifically blaming the stone traders for this devastating arson. However, some have accused of conspiracy by the group building five-star hotel and tourism establishment in Chimbuk.

According to multiple local sources, illegal stone traders set this fire to find large boulders in the hills after finishing stone lifting from the No.308 North Hangor Mouza Canal.

According to sources, the stone traders set the hill on fire at the night on March 22, 2021. After that, as the fire continued to flow, about 50-60 various fruit plantations including mango, apple plum of more than 250 families in Ramri Para, Baitya Para, Ranglai Para, Sinchyong Para and Dewai Para of Chimbuk Hills area were burnt to ashes by midnight on March 23, 2021. At the same time, 5,000 feet long water pipes of the villagers were burnt to ashes.

Meanwhile, some villagers, who did not want to be named, thought the arson was a conspiracy. They believe the fire was set to weaken and destroy Mros’ organized movement against the construction of five-star hotel and tourist facilities. According to them, though there was stone-lifting by burning the hills since 2006-07, this is the first time that unparalleled fires have been set in the hills. They believe that the fire started at a time when the Parliamentary Investigation Team of the Chittagong Hill Tracts Ministry visited there on March 20, 2021 and exchanged views with Mros on March 21, 2021 regarding the construction of a five-star hotel and tourist facility in the Chimbuk hill. Mros also expressed their firm stand on the demand to stop the construction of tourist facilities including five-star hotel in Chimbuk.

The victim Chyongi Mro, a resident of Ramri Para and a third-year student of Rangamati University of Science and Technology, said the fire was seen burning far away from their village on the night of March 22. The fire had to be put out by the villagers all day on 22 March and till 12:00 midnight on March 23.

Chyongi Mro said “Stones have been being extracted from our north Hangor Mouza canal for many years. Now all the stones of this canal have been lifted. After finishing this stone, the local Bengali stone traders have come up madly to pick up the stones lying in different ditches of the hill. But these rocks are hard to find because they are forested. So at different times the stone traders recklessly set fire to the forest in search of these stones and look for the stones.”

Menroom Mro, Karbari (village head) of Ramri Para said “My own plum plantation has been burnt down. The 400 plum trees that have been bearing fruit for the last 3 years have been reduced to ashes. Besides, I have planted about 250 new saplings last year. They too have turned to ashes. Besides, mango, litchi, dragon fruit and papaya plantations of many villagers have been destroyed by fire. He also said that these families are now destitute.”

Karbari Menroom Mro said the fire damaged a total of Tk 15 lakh in 4-5 plantations, including 400 plum trees and 600 mango trees. He said he would sit with all the victims and demand compensation from the government.

Another victim, Chyongi Mro, said residents of the burnt-out villagers were in a state of panic. His village alone has suffered a loss of Tk 50 lakh.