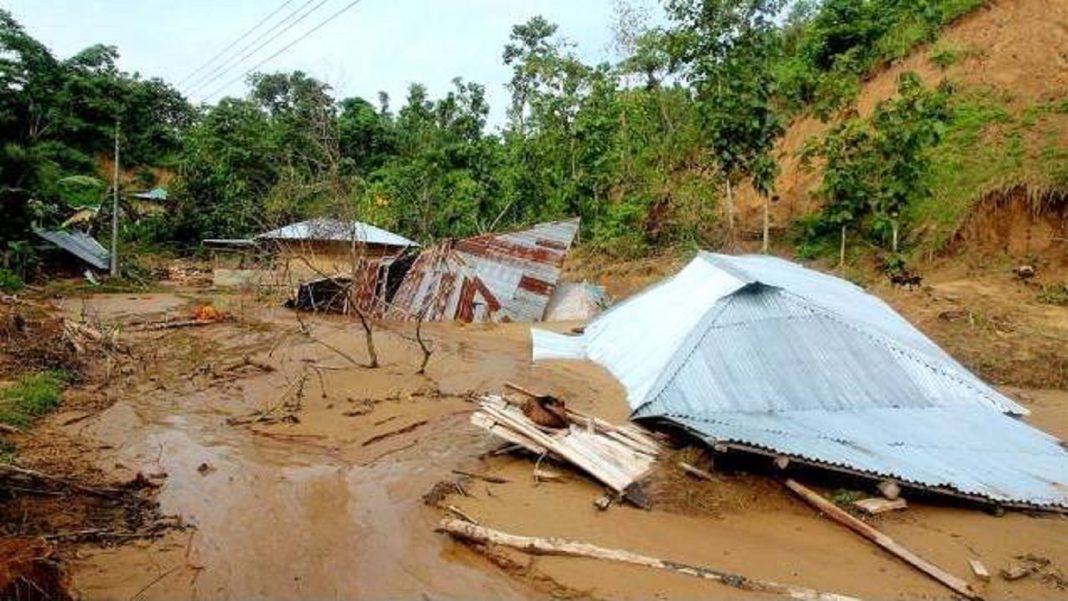 Hill Voice, 12 September 2019, Thursday, Bandarban:  Land slide was still posing a serious threat to the CHT and its people as their livelihoods and existence continued to be threatened by this natural disaster. But, such a disaster was almost entirely a manmade problem. Cutting hills and trees, digging land and destroying forest resources, illegal stone quarrying, building unplanned structures were the main causes behind landslides in the hills. At least 10 people were killed in landslides triggered by heavy rainfall across Naniarchar Upazila, Rangamati on 12 June 2018. Three labors, including a woman, were also killed in a landslide while cutting a hill to construct a drain in Ghumdhum of Naikkhyongchari Upazila in Bandarban Hill District on 21 May 2018. There were reports again that hills began collapsing in various places including Reserve Bazar, Unnoyon Board, Old Bus Station, Shimultali, Shapchari, Manikchari, Deppochari, Vedvedi and Ghagra areas in Rangamati Hill District. 5 Upazilas in Rangamati were flooded due to excessive rain. On the other hand, some 600 families were reported to be still living on 31 risky hills in Rangamati. It was to be recalled that the administrations marked 31 hills as risky zones in the CHT.

Besides, many bridges damaged or collapsed, impaired roads and houses required to be repaired soon. If the damaged roads are not fixed immediately with proper outlets for draining out rain water accumulated along the roads during the heavy rain, the danger of repetition of 2017 natural catastrophe causing landslides of unprecedented scale could not be ruled out. It was frustrating that after the devastating natural disaster and landslide in 2017, the administration could not come up, as of now, with allocation of adequate budget, man power, specific plan for compensation for the affected people. Meanwhile, a number of roads and bridges were learnt to have cracked and broken down in Khagrachari, Rangamati and Bandarban making them unsafe for travelling. Ministry of Relief and Disaster Management submitted 35 recommendations including forming a committee for preventing landslide to the Inter Ministry Committee in June, 2018.

In the inter-ministerial meeting a fresh 27-member Committee was formed to identify the causes that led to devastating landslide of unprecedented scale. The Additional Secretary of the Ministry of Relief and Disaster Management was the Convener of the Committee. The Committee was formed with the representatives from the office of the Prime Minister, Cabinet Division, Ministry of Environment & Forest, Ministry of Local Government, Land Ministry, Fire Service, Department of Armed Forces, representatives from Dhaka University and Chittagong University and the Deputy Commissioners from 5 districts as members. In November 2018, a 5-member committee led by Additional Secretary of Road Transport and Highways Division was formed to identify the causes of landslide. Meanwhile, the committee published a fact-finding report on landslide without a proper consultation with and recommendation of the indigenous leaders. Surprisingly, no representatives from the CHTRC and the three Hill District Councils were included, though, the CHTRC was the higher authority to be consulted for any decision relating to the Chittagong Hill Tracts as per the provision of the CHT Accord.

It was to be recalled that incessant and heavy downpour of rain associated with dreadful thunderclaps over several days led to extensive landslides of enormous scale in Rangamati, Bandarban and Khagrachari Hill Districts of the Chittagong Hill Tracts on 13 June 2017. The unprecedented natural disaster ever occurred in the CHT claimed 170 lives in the districts of Bandarban, Khagrachari, Chittagong and Cox’s Bazaar including 121 lives alone in Rangamati Hill District while leaving 227 souls seriously injured. Besides, the landslides that caused heavy loss and damage to the properties included thousands of acres of orchard, agricultural lands, crops and homesteads. Indicators showed that Rangamati town area was the worst to have suffered the loss caused by the disastrous calamity. As per information collected by the local administration, a total of around 15,000 families including 12,450 families in Rangamati district alone suffered losses in Rangamati Sadar, Kaukhali, Kaptai, Jurachari, Bilaichari, Rajsthali and Naniarchar Upazilas.

In spite of the frequent landslides taking place in the CHT in recent years inflicting casualties, the land grabbers and influential men were reported to be engaged in cutting hills unabatedly in Guimara Upazila of Khagrachhari Hill District. The land grabbers were carrying out their evil activities in collusion with the local administration as could be evidenced in latter’s inaction to arrest the culprits. It was also learnt that a complete list of the areas under risks were not available with the concerned authorities of the Hill Districts. This could be one of the reasons for the administration to lack in ‘preparation’ or ‘readiness’ to cope with loss of lives in landslides. Risky areas were identified in each district only before commencement of the monsoon every year. Landslide had been occurring regularly over the last decade. Experts held that random establishment of human settlements anywhere and everywhere, and deforestation as the principal cause for the recent disaster.

Hills were being ravaged with bulldozer in the south east district of Bandarban to make way for a housing project named after Bir Bahadur Ushwe Sing, the then state minister of the Ministry of Chittagong Hill Tracts Affairs. This project was being implemented on 36 acres of hilly terrain.

About 4 to 5 hills of about 5 acres in area had already been levelled to build two roads that would crisscross the housing zone. Instead of putting a stop to these illegal activities, the Chittagong Hill Tracts Development Board (CHTDB) and Bandarban Municipality each was engaged in constructing a road through the area by demolishing the hills. The 36-acre land, once owned by the Bohmong Chief’s family, was sold out in 2002.

Broadly speaking, one of the major factors for the unprecedented landslide could roughly be traced to the widespread plundering of forest resources, plantation of teak, an eco-unfriendly species of alien origin, by the Forest Department by clearing natural forests and reckless creation of extensive rubber estates by leasing out vast tract of hills to the outsiders. Another ill-conceived and politically motivated measure, rather than a land-use friendly one, of settling more than 4.00.000 Bengalis, utterly non-conversant with eco-friendly land use of the hill and its soil, in the CHT in the 1980s and the consequent pressure of this huge population on the already hard pressed topography of the CHT had reinforced the causes responsible for enormous scale of landslide as well as extensive damage to natural resources in the CHT never seen before, in addition to unnecessarily exacerbating the ethnic relation between the hill men and the Bengalis which was willfully provoked for gaining ill-intended extra political mileage.

Thirdly, thousands of hill men who faced eviction following forcible occupation of their lands and homesteads by settlers or displaced by repeated communal attacks, thronged in the nooks of Rangamati town and its suburbs. They built their shelters in places they could find in desperation irrespective of how risky they might be. This could also be a factor for landslide in and around Rangamati and other hill towns. Fourthly, there were other category of migrants (who fled their home villages feeling insecure in the midst of armed conflicts) who came in hundreds to the hill town from the rural areas. They hardly had the opportunities to consider if the spaces (mainly hill slopes as no plain land could be available) they could manage were suitable for building houses. Because too many people had gathered in too small an area.

There was scramble for spaces and people simply grabbed whatever patches of hill slopes they could lay hand to in the midst of crisis of finding spaces for shelter. Situation was such that they had no option but to construct their houses on risky slopes of the hills. In some cases, they had to cut a space out of the slope to make room for constructing a house. These factors could also possibly add to making the hills vulnerable. Similarly, the Bengali settlers, too, aided by the administration established their settlements by cutting hills. Scores of such settlement cropped up anywhere and everywhere ignoring the vulnerable alignment of the hills. All these factors were said to have combined together to invite the disastrous landslides of the like of 2017 and many other landslides across the CHT.