Hill Voice,  03 February 2020, Bandarban:  On 3 February 2020, the meeting of the CHT Land Dispute Resolution Commission had been in quorum crisis. Out of 9 members, only Chairman of Land Commission Anowar-Ul Hoque, Bohmong Circle Chief Raja Ucha Prue Chowdhury, Chairman of Bandarban Hill District Council Kya Shwe Hla and Acting Commissioner of Chittagong Division Mohammad Sahab Uddin had attended the meeting. Hence, formal meeting of the Commission could not be held as per schedule. However, informal discussion was held on resolution of the previous meeting held on 23 December 2019, list of internally displaced persons etc. issues. Besides, A T M Kauser, Chief Executive Officer of Bandarban Hill District Council and Zuam Lian Bawm, representative of Chakma Circle Chief and also district president of Movement for Protection of Forest and Land in CHT were present in the meeting.

Prior to the informal meeting held in Bandarban Hill District Council auditorium, the new branch office of the Land Commission office was inaugurated by the Chairman of the Commission.

Heinous plan to relocate settlers at Sajek, Marishya and Dakghor Mon by the army! 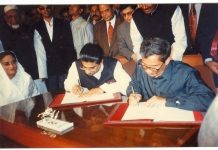 CHT Accord: Farce and Deception of Sheikh Hasina Government 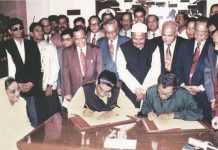 Theoretical Thoughts on the CHT Accord: Looking back over the past 22 years