Hill Voice, 30 June 2020, Rangamati:  The Muslim settlers have been threatening to face severe consequences including slaughtering Jumma villagers over land dispute at Chailyatli area of ​​Bhasanya Adam Union in Longadu Upazila under Rangamati Hill District, and planting saplings in the disputed area despite the administration’s ban. There is panic among the Jumma villagers.

It is learnt that following the dispute over land ownership between local Jumma and Muslim settlers at Jal Bajyamachhara in Chailyatli area, the administration has already banned both the parties from doing any work in the disputed area till a final solution is reached. But Muslim settlers have recently taken steps to clear the jungle and plant saplings to ensure possession of the land.

On 21 June 2020 Sunday, Bindumay Chakma, the headman of Chailyatli Mouza under Bhasanya Adam Union, sent a letterto the Assistant Commissioner (Land) of Longadu upazila, regarding forcible occupation of disputed land by Bengali settlers and fearing possible communal attack as a result of forcible occupation. 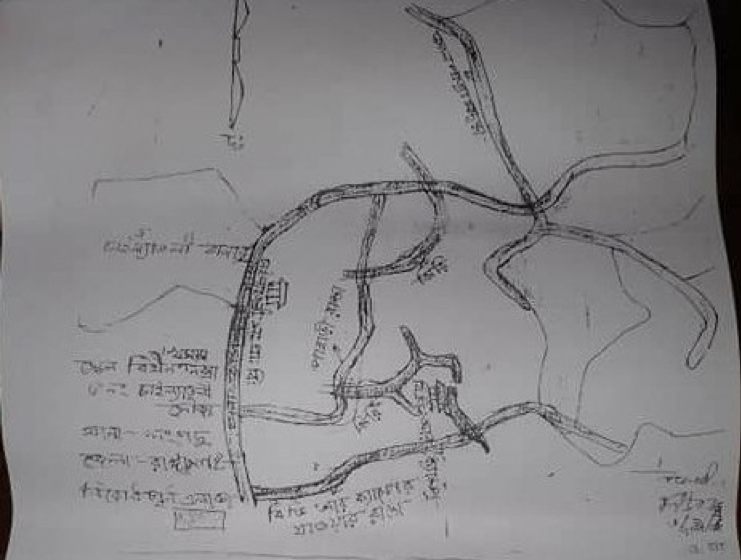 Headman Bindumaya Chakma further mentioned in the application that both have claims in the said area. In this situation, if the Muslim settlers make settlement or forcibly occupy the land in violation of the ban, a Jumma-Bengali communal incident may be taken place in the future.

It is to be noted that the Jumma people have been cultivating the land under Chalyatuli Mouza of Bhasanya Adam Union for ages. There was no Bengali settlement there. But in 1979-80, the Muslim people from plain land of Bangladesh were brought to the Longadu area for political purposes and settled down by the government.

According to him, on 6 January 2005, Kanungo of the Longadu Upazila Land Office, as the convener of the Dispute Investigation Committee, conducted an on-the-spot investigation. Administrative, social and political leaders of the upazila including Jumma and Bengali settlers were present at the time. Later that day, a meeting was held between the two sides to identify the disputed land and decided that no one could cultivate the land until further notice.

But despite the ban, Muslim settlers began planting in the disputed land in March 2020. Immediately after the matter was reported to the local BGB camp commander, it was again decided in the presence of the BGB camp commander on 25 March 2020 that since the land was in dispute and prohibited, no party could carry out any activities there.

But even then the Bengali settlers are continuing to occupy the land in various ways. They have already planted some local mango saplings in the land. In this situation, unknown persons took away the mango saplings planted on 18 June 2020 or uprooted them.

As a result, there is now panic among the Jumma people that there could be a communal attack by the Bengali settlers at any moment. The matter has already been brought to the notice of the local BGB camp commander, concerned UP chairman Hazrat Ali and member of Ward No. 8 Md. Ismail on behalf of the Jummas.

In this situation, on 21 June 2020, Bindumay Chakma, the headman of Chailyatli Mouza submitted a written application to the Longadu Upazila Nirbahi Officer and Assistant Commissioner (Land) seeking redressal of the dispute.