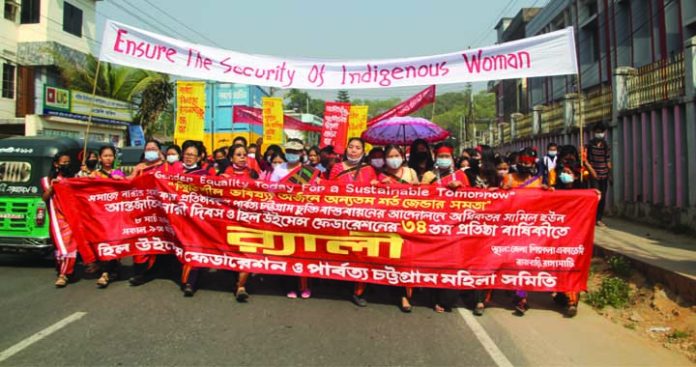 Hill Voice, March 8, 2022, Special Correspondent: Due to non-implementation of the Chittagong Hill Tracts (CHT) Accord of 1997, it was not possible to ensure the safety and security of Jumma women. Therefore, for the security of Jumma women, it is essential to implement the basic provisions of the CHT Accord immediately. Politicians need to be people-friendly and people-oriented to protect the indigenous peoples and to establish the rights of women in the country.

Jyotiprava Larma (Minu), a central member of the CHT Women’s Association, inaugurated the rally ahead of the discussion meeting, according to a press release signed by Shanti Devi Tanchangya, general secretary of the Hill Women’s Federation. The rally started from District Shilpakala Academy premises and paraded through DC Office premises and ended again at District Shilpakala Academy. More than a thousand people from different areas of Rangamati and educational institutions participated in the rally. 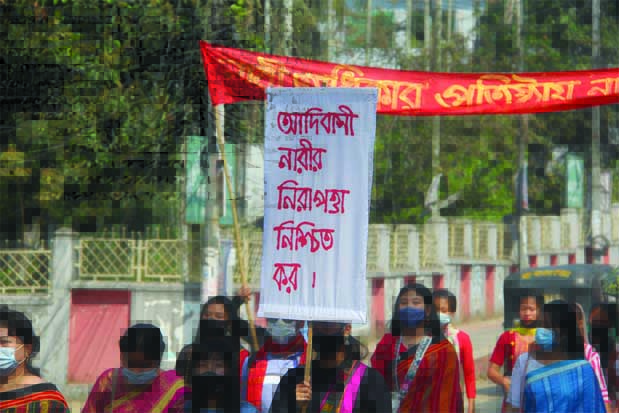 Key speaker Goutam Kumar Chakma said, “We want to get the rights. We are aware of the rights. We want to continue our struggle. That’s why we don’t have to think, how much wealth do we have? Don’t think about how much money we have? We have to think about what contribution we will make for CHT. We have to think what do our opponents want? We will not do what the opponent wants. We will do whatever the opponent does not want. Once, people did not know the Jumma women society of CHT. They may have thought they lived in the jungle, they are the highlanders, but the Jumma women recognized their rights through the movement. So, fighting mentality is a tool to protect our existence.”

Goutam Dewan, president of the CHT Citizens Committee, said, “We have been waging movement for the implementation of the CHT Accord for two eras in the hills. Women have made a huge contribution there too. Women have played an equal role in all the struggles and wars in the world. Women have also made a huge contribution in the great liberation war of this country. In order to establish equal rights of women in the society, all men and women must come forward. Today, 25 years run after crossing the two eras of the CHT Accord. It is sad but true that we have to talk about the implementation of the CHT Accord even at this time. The government is saying that so many percentages or so many clauses of the Accord have been implemented, but it is not a matter of calculating at a mathematical rate. He urged the government to implement the CHT Agreement properly.

He also spoke about the Task Force on Rehabilitation of Tribal Refugee and Internally Displaced Persons, saying that at present there are 83,000 families of internally displaced people in the CHT. If there are 5 people in each family, the population would stand 4 lakhs. The government budget for these 4 lakh people is 12 to 14 lakh takas. What kind of ridicule is that? This is not acceptable.

Journalist Sumi Khan said the presence of the army in the CHT is to ensure the safety of the people here. Not to set up tourist centers by occupying land of indigenous peoples, not for killing, torturing, oppressing the Jumma people, not to commit crimes like sexual harassment or rape of Indigenous women. Today the CHT Land Commission has been formed but the Rules of the Commission have not been made yet. This institution has been kept actually ineffective even after two eras of the Agreement. So how will the land rights of the hill people be ensured? If land rights are not guaranteed, how will they survive in this country?

She added that the Jumma people have been here for hundreds of years. They have been regarded as tribes by no means. How the state today identifies them as a small ethnic group. The rulers of the state do not have the right to decide the national identity of a nation, that right belongs to that people. Today a government has been in power for 14 years. Even after all these years, if the basic issues of the CHT Agreement are not implemented, then the question remains whether this government is people-friendly and people-oriented! She called upon the politicians to be people-friendly and people-oriented for the protection of the indigenous peoples and for the establishment of women’s rights in the country.

Advocate Sushmita Chakma said that national initiatives should be taken to establish women’s rights in the country. It is necessary to ensure equal representation of women and men in various governmental and non-governmental organizations of the country. We have to create opportunities for their empowerment. In order to build an egalitarian society or a sustainable future, everyone in the society should be aware of women’s rights. She added that the safety and security of Jumma women could not be ensured due to non-implementation of the CHT Accord. She demanded immediate implementation of the basic provisions of the Agreement.

Intumoni Talukder, general secretary of the M N Larma Memorial Foundation, said: Looking at the history of the world, it is seen that no rights have been established without movement. If the students and youth society of CHT, Women’s Association and Hill Women’s Federation join the movement for implementation of the CHT Accord, then it will be possible to establish the rights of Jumma people.