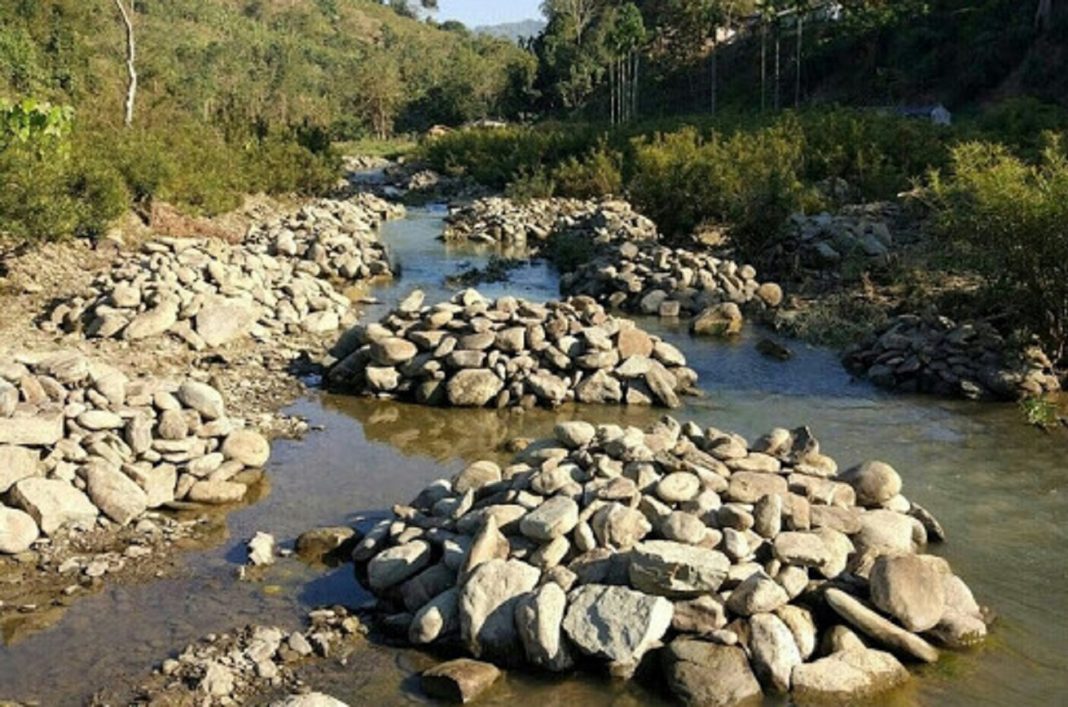 Hill Voice, 2 October 2019, Wednesday, Bandarban:  A huge commotion was created for quite some time on the issue of illegal stone extraction in the CHT. However, there seemed to be no letup in arresting the menace. Influential traders and businessman were still extracting stones from the Jhiris (hill streams), waterfalls and canals in Bandarban and Rangamati. Unbated mining of sandstones were endangering the survival of local indigenous people as the Jhiris, waterfalls and canals, the only source of their drinking water, were drying up fast in consequence. Most of the indigenous peoples were dependent on the natural water sources for drinking, irrigation, fishing and washing. Water flow from these sources was made available through such natural outlets as hilly streams, fountains etc. Unrestrained stone extraction from hills and water canals triggered landslide, upset the ecological balance of the environment, and polluted the water making it unsafe for use or consumption.

The stone mining had been continuing for the past ten years. Stones were being removed especially from Rui Canal, Tak Canal, Taker Panchhari Jiri, Den Jiri, Tonkaboti Canal under Lohaghara Upazila, Chittagong. Trees were cut down and stones were pulled out from streams in Chela Chhara of Kawkhali Rangamati Hill District, a remote village inhabited by about 150 Chakma families. In Bandarban Hill District, stones were being illegally extracted from various Upazilas of the district such as Alikadam, Thanchi, Ruma, Lama, Naikkhongchhari and Rowangchhari and Sadar Upazila. The culprits engaged in stone extraction usually became active during the summer when the flow of water shrank significantly and streambed became exposed. Stones, collected illegally, were mostly purchased by local municipalities, various government bodies, especially the local government and engineering department, the public works department, the Chittagong Hill Tracts Development Board and the Department of Roads and Highways. Generally, the water flows in streams and canals became slender during the summer as water level shrank, causing scarcity of potable water. Removal of stones from stream beds exacerbated the availability of water further as the stones were known to naturally conserve water and its sources. As stone removal drove to water shortages, indigenous peoples, living in the catchment areas of stone mining, faced severe water crisis and were, therefore, forced to leave the hills following the drying up of water sources there. Local civil administration, forest department, law enforcers including security agencies seemed to be inactive or reluctant to take legal measures/actions to deal with the stone plunderers in order to stop their illegal stone extraction.

The Bangladesh Marma Student Council (BMSC) voluntarily began a six-month survey in November to study the overall impact of stone extraction. They found out that the laborers in the streams were breaking large boulders into small pieces with hammers and loading them into vans to be transported away. These stones were mostly used in construction and repair of roads. Such a mindless extraction was affecting 12000 people in the hills. All the streams from the hills in Bandarban Hill District were emptied into the Sangu River that stretched over 170 kilometers till it fell into the Bay of Bengal. As mentioned earlier, local administrative authorities were alleged to be not assertive enough in containing the menace. Some government officials were reported to be involved in investing their money through local headmen and karbari (indigenous leaders) to earn profit from such illegal activities. An innovation lab, jointly run by local and international organizations in Bangladesh to identify and finance local knowledge-based disaster and emergency preparedness, had found out 12 local innovations for disaster preparedness. The project was jointly managed by the Start Network comprised of 15 British humanitarian agencies and the Disaster Affected Communities Networks and funded by UK Aid.