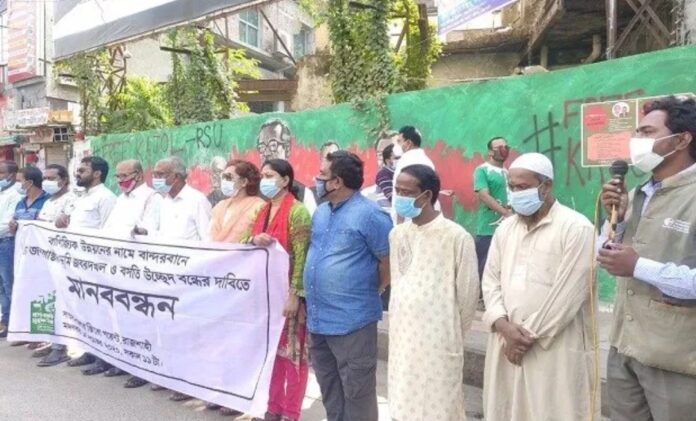 Hill Voice, 20 November 2020, Rajshahi: In Rajshahi, as in other parts of the country, a human chain has been held demanding an end to land grabbing and eviction of indigenous Mro people in Bandarban in the name of commercial development. This human chain was organized on the initiative of ‘Pran-Prakriti Suraksha Mancha’ at Saheb Bazar Zero Point crossing of Rajshahi on 16 November 2020 from 11:00 am to 12:00 am.

Speakers at the human chain said that any eviction in the name of development must be stopped. Why in Bandarban, Sikder Group will build a five star hotel in such a remote area? As there is no such hotel in Rajshahi, cricket test venue is not going to be held here. Let them set up a hotel here.

The speakers said that it would be questionable whether they would build a hotel there or take possession of the land. The government should move away from this plan to evict about 10,000 Jum cultivators in the Mro area of ​​Bandarban.

The speakers called on the government to move away from any development plan that destroys the environment. They protested against the withdrawal of water from the Halda River in Chittagong and the destruction of hills and forests in Maheshkhali.