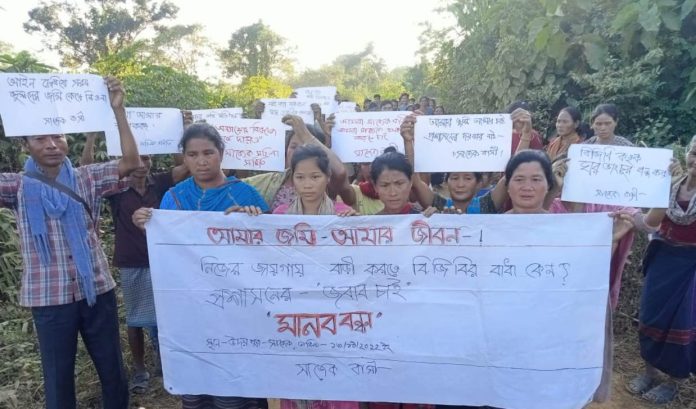 Hill Voice, 14 November 2022, Rangamati: It is reported that a human chain was held in Sajek union of Baghaichari Upazila under Rangamati Hill District by the local people in Sajek to protest against the obstruction and vandalism of the houses of the local Jumma villagers by the Border Guard Bangladesh (BGB).

Yesterday, November 13, 2022, men and women of Choumuhani area of Udaipur village, adjacent to Sajek border road, organized this human chain. The banner reads “Why does BGB obstruct us from building houses in our own land? We want answer from the authority.”

The placards displayed in the human chain also mentioned ‘Don’t take away the land of vulnerable Jummas in the pretext of law’, ‘My land, my life’, ‘We are Sajek residents, we want to live in Sajek’.

According to local sources, on November 12, 2022, Commanding Officer (CO) of 27th Battalion of BGB Lt. Col. Md. Shariful Abed (SGP) and Baghaichari UNO visited to Sajek and instructed the local Jummas to refrain from making any house there.

The next day on November 13, 2022 at around 9:00 am, a group of BGB personnel came there and demolished the houses of 4 villagers at Bara Kamlak Para village. Meanwhile, they obstructed the construction of 2 houses and took the poles, trees and bamboos for the houses to the camp.

While speaking on behalf of the villagers in the human chain, Suryasen Chakma said, “There is a conspiracy to take away Jummas’ land on both sides of the road under No.168 Kamlak Mouza and No.167 Ruilui Mouza by the BGB and the army in Sajek Union of Baghaichari Upazila.”

He added, “From 2021 on, 210 families have been affected. Various fruit plantations including paddy fields, banana plantations, teak plantations, turmeric plantations have been damaged there. While, in the name of road construction, hundreds of crores of money have been spent and the lands of Jummas have been expropriated from. The construction of houses in Sijakchara area adjacent to Ruilui is being prevented. And we can’t build a house on our own land, they obstruct us. At around 9:00 am, the men from the camp came and took away various tools including poles, cots, trees, bamboos for making houses to the camp demolishing the erected houses.”

He added with allegation “Prostitution is being encouraged at Ruilui area in Sajek in the name of development and tourism.”