Hill Voice, 19 November 2020, Rangamati: In the Rangamati Sadar areas of ​​Rangamati Hill District, there have been allegations of house-to-house searches, harassment and ransacking the belongings by the army.

According to local sources, yesterday on 18 November 2020 at midnight around 1:00 am, a group of army of Goboghona army camp under 23 East Bengal Army Zone in Jibtali of Rangamati Sadar upazila surrounded the house of Nigara Moni Chakma (38), son of Ittukya Chakma of Dhanpata Natun Bazar area of ​​Mogban Union. Army members looked for Nigara Moni Chakma at home. But even though they did not find Nigira Moni Chakma, the members of the army harassingly conducted a massive search of the house.

On 16 November 2020, at around 4:00 pm, an army contingent of 45-50 people from Jurachhari Army Zone of Jurachhari Upazila came and set up a tent at the site of the abandoned Basanta Mon Army Camp at Balukhali Union in Rangamati Sadar. At this time there was panic among the villagers of the area and normal movement was disrupted. After taking a one-night stand there, the Army members returned to the zone from there the next day, November 17, 2020, at 10:30 am.

On the other hand, on 15 November 2020, at around 10:00 am, a joint group of 40-50 people of army from Jibtali 23 East Bengal Army Zone and Gaboghona Army Camp surrounded the house of Niron Chakma (28), son of Shuddhodhan Chakma of Panchhari Para in Jibtali Union.

At that time, the army members did not find Niron Chakma at home but conducted a massive search of the house, ransacked belongings of the house and harassed the people of the house by asking various questions.

3 innocent Jummas detained by army and later released in Jurachari 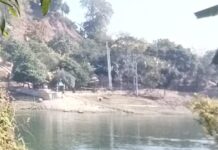