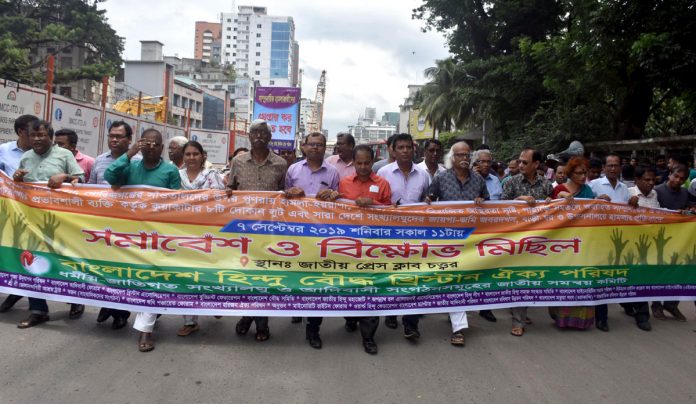 Hill Voice, 7 September 2019, Dhaka:  Leaders of the Bangladesh Hindu Buddhist Christian Unity Council issued a demand for restoration of the constitution of 1972 as it was, at a rally. They also said that keeping Islam as state religion, secularism cannot exist in the constitution.

The rally was held in front of the National Press Club in Dhaka on 7 September 2019. The rally was followed by a protest procession that paraded different city roads.

Advocate Rana Dashgupta, General Secretary of the Council, at the rally, demanded restoration of the first constitution of 1972 with democracy, socialism, secularism and nationalism.  He also said that the country could not be secular keeping Islam as state religion in its constitution.

Mr. Rana put a complaint that after the national election held on 30 December 2018, the religious minorities came under attack and abuse in different parts of the country. He called on the government to take immediate steps to stop attacks on the minorities.

The rally was chaired by senior leader of the Council Mr. Neem Chandra Bhowmik and addressed by among others Mr. Kazal Debnath, Mr. Subrata Choudhury, Mr. Basudev Dhar.