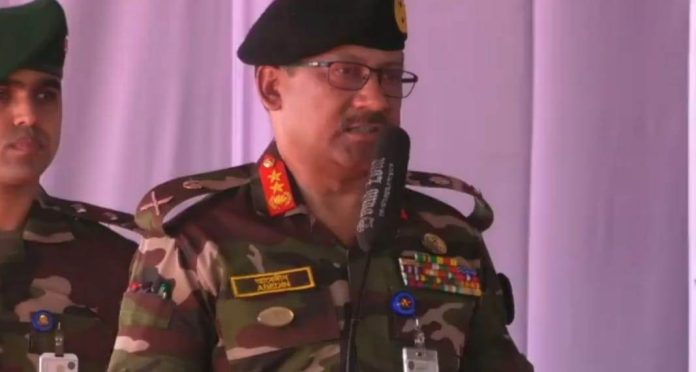 In his speech at the inauguration of the APBN Regional Office in Rangamati on 26 May 2022, as a special guest, General Officer Commanding (GOC) of the 24th Infantry Division M J Saiful Abedin’s extreme racist and ultra-communal mask has fallen off. In his speech, he spoke from the beginning to the ending in favor of the Bengal settlers (non-tribal as per his term) and against the indigenous Jumma peoples (tribes as per his term) in various ways.

It can be said that he hid his racist and extremist communal shell for so long. A headman from Rangamati, who did not want to be named, said that during his visit to Chittagong Hill Tracts (CHT) at different times after taking charge of Chittagong Area Commander and 24th Infantry Division of Bangladesh Army on 31 December 2021, he expressed his opinion to the CHT leaders that he wants implementation of CHT Accord. During his tenure as GOC, he will play a positive role in the implementation of the CHT Agreement. The headman further said that the GOC also showed his interest in being informed about the status of implementation of the Accord and also in identifying the non-implementation issues of the Agreement.

But he could not hide his chauvinistic and racist character in the end. If ultra-nationalist and communal blood is in the bloodstream, it may be hidden temporarily, but not in the long run. It must be revealed somehow. The same is true in the case of the GOC.

He is probably unaware that there are constitutional provisions for the backward section of the citizens to adopt special provisions or to take positive action. According to her speech, if the Adivasi (tribal) quota is opened for Bengalis, then all the quotas or arrangement of reservations, such as, quota for women, quota for the disabled, district quota, quota for freedom fighters’ children, quota for dependents, reservation of seats for women in Jatiya Sangsad and local government council etc. have to be made open to all communities. Quotas are reserved in the light of the special reality of particular section of people. And if that reserved system is opened up to any other sections of people, then the quota will have no meaning. It is a shame that the GOC does not understand that even though he is the army chief of a large territory of the country!

Since the Jumma peoples in the CHT is still backward and lagged behind in many respects, the CHT Accord includes provisions for the reservation of quotas for Jumma peoples. Those who speak out against this quota are undoubtedly opposed to the state-recognized treaty (the CHT Accord) and have an undemocratic outlook – in fact, there is no need to say that again.

We have been hearing such demand from ultra-nationalist, ultra-communal and fundamentalist Bengali settlers and their organizations to change the ‘tribal quota’ to ‘hill quota’ and include the Bengali settlers in that quota. But this is the first time we have heard the Bengali settlers’ childish demands from the mouth of a commander. It is really sad for the whole country that a high-ranking general of the state expressed solidarity with the demands of a fanatic organization. This displays how the country is fiercely becoming communal, extremist Bengali nationalist and racist as a result of such attitude of Major General Md. Saiful Abedin. Many have suggested that he should not be given the responsibility of Chittagong Area Commander and 24th Infantry Division of the Bangladesh Army but should be made the president of the settler’s communal organization named Parbatya Chattagram Nagorik Parishad (Chittagong Hill Tracts Citizens’ Council).

Speaking in favor of the Bengali settlers, he added, “At present, 51 per cent tribals and 49 per cent non-tribals live in the CHT. It will not be possible to establish any kind of peace process here today excluding the non-tribal (Bengali) people.”

But those who do not have legal land title and permanent address cannot be considered as Permanent Residents of CHT and there is no question of involving them in any process of CHT, same as there is no question of involving permanent tribal and non-tribal people of CHT in any process of Barisal district. So, this statement of a commander like GOC is completely against the provisions of the CHT Accord, which unequivocally exposes his utter ignorance about the Accord.

His statement stating “The demand for relocation of non-tribal citizens to any other place in Bangladesh is nothing but a pipe-dream” also came from his racist, colonial and fascist views. If we embrace democracy, if we follow secularism and progressivism, and if we respect the rights of any other nation, then relocation of Bengali settlers outside CHT cannot be an imaginary. If the Reang refugees from Mizoram can be resettled in Tripura, then there seems to be no reason why the Bengali settlers could not be taken out of the CHT.

GOC Saiful Abedin, on the one hand, has made various strange arguments in favor of the Bengali settlers, on the other hand, has made utterly contemptuous remarks against the Jumma peoples. He did not hesitate to call the ‘tribal quota’ introduced under the constitutionally recognized fundamental right as ‘grace of the government’. He even made insulting remark stating that the hill tribes are abusing the quota system introduced at the grace of the government.

He even questioned why the Chakmas were being educated so much. He said, “The literacy rate of Chakmas is 73 percent. How are you getting so educated? You are holding various high positions. Why are you in such a high position? You also have a strong presence in various organizations at home and abroad. Why?” What a horrible hatred of the GOC! What a strange revenge! But the question arises, where did he get that the Chakmas are 73 percent educated? We have searched so many segregated data of Adivasi or Jumma people, but we have not found any statistical book of Bangladesh for the same. I thank the GOC for this, at least he paved a solution to the problem by providing a fictional statistic, even though such statistics are not available in government statistical book.

In assessing the role of the two sides in the implementation of the CHT Accord, he only saw the failure of the PCJSS unilaterally and presented various fabricated arguments and misleading information. He said, “Is it the responsibility of the government alone to implement the CHT Accord? … Almost all the clauses in the Accord were applicable to the government, whereas only two clauses were applicable to PCJSS. Article 13 and Article 14 of the Part ‘D’ of the Accord state that the then members of PCJSS will deposit all their weapons and surrender all their armed cadres. …To what extent have these two Articles been implemented?” According to him, PCJSS even did not implement those two Articles too.

Then, were the 1947 members of PCJSS who handed over hundreds of automatic weapons and ammunitions to the then ministers and MPs including the Prime Minister false and fabricated? So far, no government or authority has made such allegations against the PCJSS or taken legal action against the members of the PCJSS in accordance with Article 15 of the CHT Accord for failing to deposit their arms. But suddenly, after 25 years, the fertile brain of the GOC discovered it! It is extremely ridiculous!

The unimplemented provisions of the Accord include the preservation of the characteristics of the tribal area status of CHT region; introduction of special governance system consisting of Regional Council and three Hill District Councils by delegating various political, administrative and economic powers and functions including general administration, law and order, police, land and land management, forest and environment, tourism, development of communication system etc.; conducting elections for these councils by compiling voter lists with permanent residents; resolving land disputes through Land Commission by returning dispossessed land to the Jumma people and canceling all leases given to outsiders; rehabilitation of India-returnee Jumma refugees and internally displaced persons by returning their lands; withdrawal of all temporary camps of security forces including de facto military rule ‘Operation Uttoron’; appointment of permanent residents in all jobs in the CHT giving priority to the hill tribes; rehabilitation of Bengali settlers outside the CHT in accordance with the unwritten agreement, etc. The GOC did not raise any of these issues even as tokens in his speech. It definitely exposed his one-sidedness and prejudice mindset.

One of the objectives of the GOC refrained from mentioning the government’s delaying-dallying tactics in implementing the CHT Accord was to cover up the failure of the government and on the contrary to criminalize the Jumma peoples by blaming them for failing to implement the Accord. One of the strategies used by the ruling class in every country to divert the repression of the rights movement of any indigenous ethnic group is to criminalize the movement and spread propaganda against it. In the case of the liberation war of Bangladesh too, the Pakistani ruling class tried to criminalize it in the same vein. In fact, the GOC’s one-sided and prejudice as well as threatening statement is a reflection of that Pakistani mindset.

He called on the Jumma peoples for war, mainly to criminalize them at home and abroad as terrorists, extortionists, miscreants, and threatened to wipe out Jumma fighters within 30 minutes. He was so blinded by racism and muscle power that he readily acknowledged that the army was at war with a section of the people of of an independent country. He also seems to have lost his sense of urgency to consider the extent to which calling for war against his own people is detrimental to the country’s image. The war of the government with PCJSS before the Accord was always denied by the successive governments of that time. And in this case, the position of the GOC in acknowledging the army’s war against the Jumma people is absolutely straight forward, which in a sense is really commendable.

While speaking as the special guest at the inauguration of the APBN regional office, Chakma Raja Barrister Devashish Roy rightly said that if law and order and security forces can play a role as per the CHT Accord and if the Prime Minister takes appropriate steps, above all fundamental rights of citizens and nationalities are upheld, then lasting peace must be restored in the region and the unscrupulous activities of the so-called regional political parties must be stopped. There is no doubt that as soon as the policy makers of the government including the GOC realize the significance of this statement of Chakma Raja Devashish Roy, lasting peace will be established in the CHT so fast. 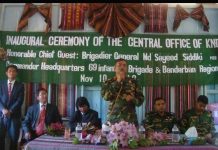 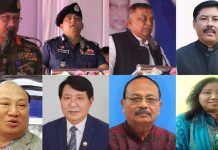 ‘Big Talks’ of Ministers and Bureaucrats and A Few Words