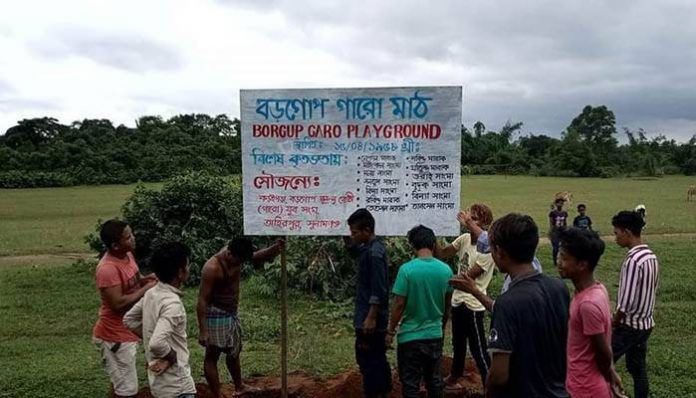 Hill voice, 14 September 2020, Sunamganj: The Garo field is being occupied by the land grabbers of Tahirpur in Sunamganj which has been used by the indigenous Garo community for centuries as a playground and for various festivals. Recently, local settlers (settlers from other places) have been claiming the land for themselves. There has been tension between the two sides.

Although there were several arbitration meetings at the local level, no solution was reached. Now the settlers are not allowing the Garo people to enter the field. For this, on 7 September 2020, the people of Garo community have made a written request to the public representative, upazila administration and police administration to return the field. A new application was also made to the Deputy Commissioner last Sunday.

Garo community leaders Sunil Dajel and Sanjib Dalbat said the indigenous Mandi (Garo) people had been using the Baragoptila as a playground by clearing trees in 1948. Organizing football-cricket tournaments every year, National Day, They have been celebrating Indigenous Day in this field. A few months ago, some settler youths living on government khas land came to occupy the field by force. They picked up the signboard commemorating the ancestors of the aborigines. At this time they threatened the indigenous people not to come to the field.

The history said, in 80’s, Bengalis started infiltrating the area with the help of the state in various ways. As a result, unplanned settlements were created in the hills and the Bengali people, who were mainly displaced due to the floods and organized various crimes, started to settle there. In collaboration with the local administration, the local leaders help the settlers to occupy the lands or hills of the Garos for the purpose of using them as their vote bank.

Upazila Parishad Chairman Karuna Sindhu Chowdhury Babul also said, Indigenous people once lived in this hill. People from other communities have also been displaced by natural disasters and are now living there.

Upazila Nirbahi Officer (UNO) Padmasan Singh confirmed the allegations and said, “An application has been made to my office in this regard. I have instructed to take immediate action in this regard.”

In this regard, UP Chairman Abul Kashem said, “I have restrained both parties from going to the field.” I could not present at the arbitration due to my daughter’s marriage at that time. I want to find a peaceful solution with the administration as the issue is sensitive.

However, Birendra Kishore Roy, a forest bit officer in Bishwambharpur and Tahirpur, said that the land in the field has been in dispute for a long time. There is tension between the parties. In fact, this land is in the khas khotian of the district administration. A proposal was sent to the Deputy Commissioner long ago to give this land for forest expansion.

Deputy Commissioner Mohammad Abdul Ahad said, I will tell UNO to resolve the issue with peacefully as soon as possible.