Hill Voice, 17 October 2020, Rangamati: A false case has been filed against 23 innocent Jummas, including local leaders and activists of the Chittagong Hill Tracts Jana Sanmhati Samiti (PCJSS), by falsely implicating them in the murder of a Bengali fish trader in Rajasthali, Rangamati district. In addition, 10/15 more unidentified Jummas were also charged in the case, citing so-called ‘armed hill terrorists’. 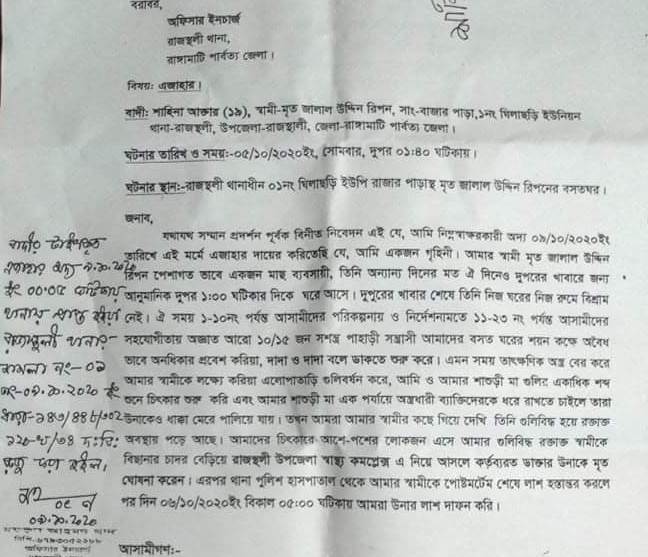 Plaintiff Shahina Akhter stated in her statement that ‘as per the plan and instructions of the accused from 1st to 10th, in collaboration with the accused from 11th to 23rd, 10/15 more unidentified hill terrorists entered the bedroom of their house and shot at her husband at random’.

It may be mentioned that Jamal Uddin Ripon, a fish trader, was shot dead by the unidentified miscreant at his home in Bazar Para area of ​​Rajsthali upazila on October 5, 2020 at around 1:00 pm. He was later taken to a local hospital where doctors pronounced him dead. It is learnt that Sarwar Alam Dikan, elder brother of the killed Jamal Uddin Ripon, worked as a fundraiser for the local terrorist organization Mugh Liberation Party (MLP). It is believed that as a result of the dispute in this connection, a party came to kill his elder brother Sarwar Alam Dikon, but killed his younger brother Jamal Uddin Ripon.