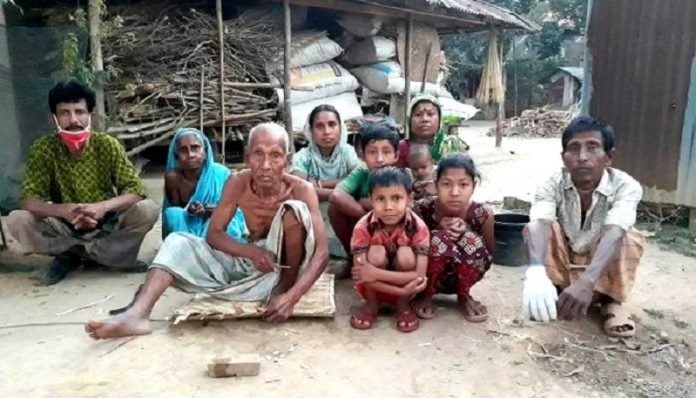 Hill Voice, 01 April 2020, Mymensigh:  Three hundred Koch-Burman families are spending days without work and passing miserable condition at Fulbaria in Mymensigh district due to crisis caused by the coronavirus.

Since birth, the mother could not breastfeed to her six month old baby, Aonkita. She is forced to feed powdered milk. Where the father of baby Pilot Chandra Burman will get milk now as he has no work, no money. By feeding little rice Suzy, she saved her baby somehow. For money, the father is on the run, and his mother Ratna Chandra Barman is throwing tears.

Similar to this family, the condition of 1200 people in the 300 Koch-Burman families of Fulbaria in Mymensingh district are the same.

These indigenous people are suffering from extreme food crisis. Government assistance is far from the point, no person or organization has ever come forward with their help.

The mother of the baby girl Ankita said with a tearful eye, ‘I have never seen such a day in my life. As fishes are not sold in the market, hence the fishes are being dried. No rice in the house, I have been keeping the girl for a month just feeding Suzy. We may not eat one half at a time, but how much can a child endure? The girl’s father is looking for work all day. Now, due to coronavirus, nobody wants to give him work.’

The oldest person in the family is Chandra Barman (85). The family members are 15 with wife and children and grandchildren. For the last one month, his entire family has gone away from selling cottage goods. For a month, the family has failed to sell commodities of their cottage industry. They have left the house amid severe hunger. They are waiting, some one may come there along with help.

Makhan Chandra Barman’s home is situated at the south of Kochpara. His eldest son, Swapan Barman, said his father had failed to sell homemade goods in the market. His wife Chintamani Barman was sitting next to Makhan Chandra. In reply to how are you asking, she asked me, ‘Well, are you a public person? Have you brought rice? There was no rice in our house. The eldest son took his father to Fulbaria Government Hospital, but doctors did not see him.’

Bimala, Saraswati, Anita, Kalpana and Sonika Barman of Burmanpara said they work in cottage industries in their neighborhood. For this purpose, the merchants bought their bamboo. With this, they make bamboo strips, mat, kula, dali, sieve etc. Now Due to coronavirus in the country, the sale of these goods is now closed. Merchants also does not pay.

Bipul Hur, president of the Upazila Branch of the Bangladesh Hindu Buddhist Christian Unity Council, said that no one from the poorest families wants to tell anyone about their troubles, nor does anyone look for them. Along with government assistance, the rich persons should come forward for the help of them in this moment of disaster.

Rangamati Union Parishas chairman Salina Chowdhury Sushma said, “I myself will make a list of the families whose condition is worst, and give it to the Upazila Executive Officer (UNO).”

UNO Ashraful Siddiq said a separate list of Barman-Koch family would be sought from their own respective Union Parishad chairman for government support to Barman-Koch families and take action accordingly.