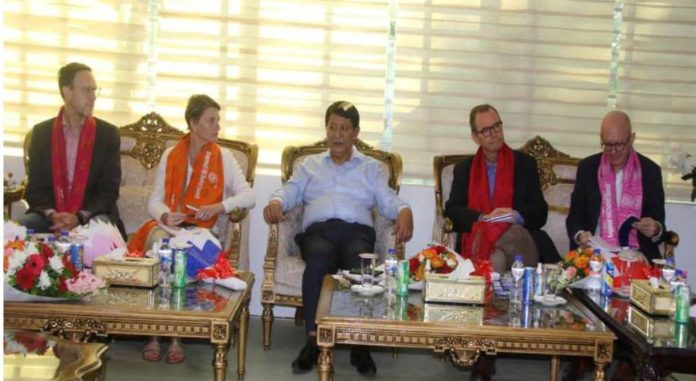 On November 10, 2022, the Ministry of Foreign Affairs granted permission to the diplomatic delegation to visit Rangamati and Khagrachari subject on 10 conditions.

Dhira Kumar Chakma, a senior leader of Parbatya Chattagram Jana Samhati Samiti (PCJSS), said that the chairman of the Regional Council is a state minister and he is also one of the signatories of the historic Chittagong Hill Tracts Accord of 1997. He opined that such unethical instructions were given by the Ministry of Foreign Affairs to make vigilance him, which reflects the government’s anti-‍Accord attitude.

Another condition is that the delegation is advised not to provide financial or other assistance (secretly or publicly) to the local tribal communities/representatives and not to make any comments that may cause unrest about the situation in Chittagong Hill Tracts (CHT).

When asked to respond to this, the former president of Pahari Chatra Parishad, Bachchu Chakma, said that the government’s racist policy has been exposed through this. Because conditions are imposed only in case of Jumma people, there are no restrictions in case of Bengali people. This young leader said that it is ultra-virus to the fundamental rights recognized in the constitution and the international treaty on human rights of the United Nations.

In addition, presence of a mid-level official nominated by the Ministry of Foreign Affairs is mandatory in all official meetings during the visit and the visiting diplomatic delegation is restricted from holding any closed-door meetings and unscheduled meetings with local communities/representatives.

If such reports are received from the field, the permission to visit diplomatic representatives may be withdrawn at any time at very short notice, the notice warns.

It is to be noted that such conspiratorial and politically motivated suggestions were given by the Ministry of Foreign Affairs during the visit of Danish Ambassador Ms. Winnie Istrup Petersen to Rangamati and Chittagong on 24-25 October 2022.

Earlier on 7 January 2015, on the recommendation of the security forces, the Ministry of Home Affairs issued 11 restrictions on Chittagong Hill Tracts, one of which was to make it mandatory for foreigners to obtain permission from the Ministry of Home Affairs to enter the CHT and for domestic and foreign organizations and individuals to have army representatives when talking to the tribal Jumma people in the CHT.

This way today the Awami League government is trying to isolate the CHT region as well as Jumma people from the international community and the outside world.