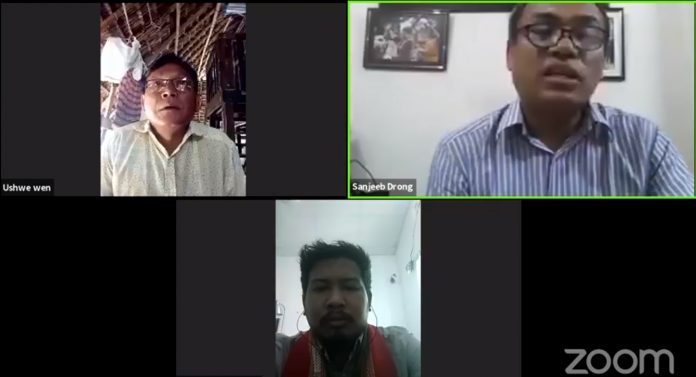 Sanjeeb Drong presented keynote paper in the online discussion. 62% of the plains indigeous people have lost their jobs due to corona, he said. Most of them worked part-time in shopping malls, beauty parlors, housemaids, drivers, day laborers, and security guards, many national and international organizations.

The keynote paper further states that the income of the plains indigenous people have decreased by 92%. Due to the Corona epidemic, various institutions were closed and at least 500,000 plain land indigenous people lost their job. They become the “new poor” people. They are not poor before. This number is increasing day by day.

Sanjeeb Drong also demand in the key note to provide special economic incentives mentioning the names for the Indigenous of the plains during the Corona period; provide special financial package for new poor indigenous people who have lost their jobs; to provide loan at low interest rates to them with 50% as grants and 50% as longs-term loans; to arrange short-term employment for at least 10,000 to 20,000 indigenous youth in the plains; to provide special one-time financial assistance for Indigenous women working in beauty parlors; to include a large number of indigenous marginalized people in various government social security network (old age allowance, widow allowance, disability, maternity allowance, etc.); to add at least 50,000 indigenous people to the list of the government incentives for 5 million poor people; and to establish a separate ministry for the plains aboriginals.

During the discussion, Zakir Hossain of Nagarik Udyog emphasized on ensuring long-term social security of the indigenous people living in the plains and collecting separate information on upazila basis for the beneficiaries for financial assistance. He further said that the Indigenous people are being forced to take loans at high interest rates and for that they are being forced to sell their crops earlier. They are going to face serious problems within a few months. In the meantime, the poor will become even poorer.

Sara Marandi, Social Development Director of the Rural Development Center, said, Indigenous people are facing food shortages, leading to malnutrition. The government should take immediate action to save their lives. “

Recently, IPDS in association with Minority Rights Group Europe conducted a study on the impact of COVID-19 on the lives of indigenous people living in the plains of Bangladesh. The survey was conducted among 1,205 households in 35 plains indigenous communities in 28 plains districts. The IPDS released the results of its survey on Thursday.