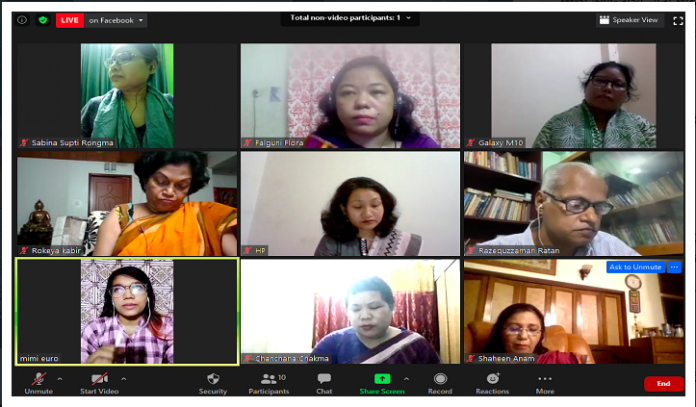 Hill Voice, 21 June 2020, Dhaka:  A virtual discussion meeting demanded to ensure jobs and provide financial assistance in times of need for indigenous women beauticians who became unemployed due to the COVID-19 epidemic by making a list of them.

Chanchana Chakma, Member Secretary of BIWN presided over the virtual discussion. IPNEWS was the media partner of BIWN.

Taking part in the discussion, Rokeya Kabir, Executive Director of BNPS, said that beauty parlors are one of the informal sectors. Indigenous women working in this sector are facing more difficulties due to this global epidemic.

She also demanded that the government provide more assistance to them. He opined that the salaries of educational institutions should be waived for the children of workers engaging in this profession and the indigenous workers involved in this sector should be included in the government’s emergency fund.

Shaheen Anam, executive director of the MJF, said, “I am very concerned about the range of beauticians. It remains to be seen how co-operation can be obtained under labor law. He also praised the role of indigenous women in the expansion of beauty parlors.

She added that indigenous women should not only work in beauty parlors, but also look for other occupations. He also said that it was important for the government and other agencies to come forward.

During the discussion, Tuli Labanya Mrong said that most of the indigenous women are working in the beauty parlor and beauty services sector in Bangladesh. Due to poverty and easy availability, indigenous girls are trying to bring financial prosperity by adopting this profession.

But she also lamented that they were living inhumane lives during the Corona epidemic. She strongly recommended the government to come forward in this regard as the government has declared this sector as an industry.

Besides, taking part in the virtual discussion, the President of the Socialist Workers Front Rajekuzzaman Ratan said that the indigenous beauticians were behind the crisis. Beauticians dress up others but we never hear of their pain.

He added that we have to think about their accommodation, food, security, etc. There is no specific policy in any beauty parlor. There is no rule on how to get hired, how much will be the salary.

He also called upon the indigenous leaders to stand by the unemployed indigenous women in this regard by handing over a memorandum to the respective Deputy Commissioner. The labor leader also opined that cooperating with the workers working in beauty parlors and garments is not a mercy of the state but a responsibility.

Meanwhile, beautician Emelia Maji, who took part in the discussion, said, “We have come to this profession to support our family. Since the parlor is not open, I am not getting salary. Everyone is in trouble. Again, I am also a student. It would have been nice if cooperation could have been found at this moment.”

During the discussion, beautician and parlor owner Kuheli Azim said, “The sky fell on our heads in Corona.” Many had to move to villages due to the closure of parlors. Even if some help is received, it is insignificant compared to the need. I can’t pay the rent of the house.

She also expressed concern that we have to sit on the road in such a situation. The owner of the parlor also hoped for incentives for those working in the sector, seeking the government’s attention in this regard.