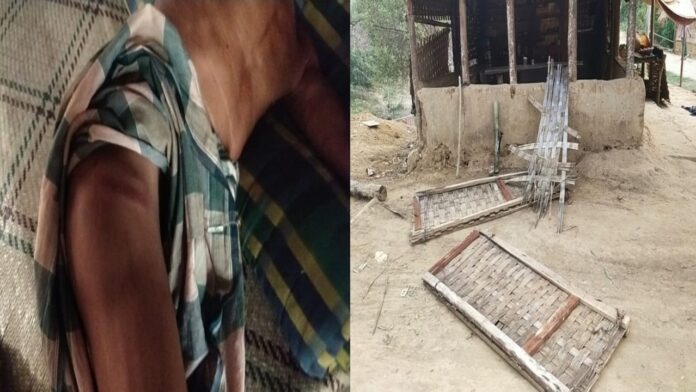 Hill Voice, 24 April 2021, Rangamati: A group of Bengali settlers led by Rassell Chowdhury, Chairman of Amtali Union Parishad in Baghaichhari Upazila under Rangamati Hill District, reportedly carried out a communal attack on Jumma village called Perachhara in Ward 7 of the neighboring Sarboatali Union. Three Jummas were injured in the attack and one shop and one Buddhist monastery were vandalized and looted.

The attack took place between 3:00 pm and 4:00 pm today on Saturday, April 24, 2021. As of the writing of this report, the situation in the area including the incident site is reported to be tense.

It may be mentioned that after the incident this morning, Md. Rob Mia returned to his village and informed the matter to the Chairman of Amtali Union Parishad Rassell Chowdhury.

Later, today at around 3:00 pm, 20-25 Bengali settlers, led by Rassell Chowdhury, Chairman of Amtali Union Parishad, by a jeep, armed with sticks and sharp weapons, attacked the Jumma-inhabited village of Perachhara without any consideration.

At that time the Bengali settlers attacked Purnachandra Chakma’s shop and looted the money and goods of the shop.

The assailants then attacked a Buddhist monastery called ‘Naba Karunapur Banavihar’ in the village. They also carried out extensive vandalism and looting in monastery. At that time, Chulakal Bhikkhu, the principal of the Buddhist monastery, fled elsewhere in search of survival.

It is learnt that at one stage Jumma villagers also tried to resist. On the other hand, after carrying out the attack for about an hour, the settlers led by Chairman Rassell Chowdhury returned to Amtali.

It is learnt that at one stage of the incident, a group of BGB members went to the spot to bring the situation under control. But even though they were there, it is known that they could not give any solution till the writing of this report.

A villager, who did not want to be named, said that BGB members sometimes threatened them with guns.

The situation in the area is still tense.

Some villagers demanded the administration to immediately arrest Chairman Rassell Chowdhury and other attackers and take appropriate action against them.