On 14 September 2020, during a video conference on development in the three hill districts and Cox’s Bazaar, Obaidul Quader, Minister of Road Transport and Bridge Ministry and also General Secretary of Awami League said that ‘Sheikh Hasina has opened the golden door of development in the hills.’ He added that the breeze of peace that Sheikh Hasina has evoked through implementation of the Chittagong Hill Tracts (CHT) Accord, it is that avenue along which the potential hill region is marching ahead.

It is to be noted that CHT problem is an age-long political crisis. Hence, the issue has to be viewed in light of political framework and secondly, the development programs have to be judged in light of human rights.

Needless to say, at the beginning, during formal talks on solution to the CHT crisis, Ershad government acceded the CHT issue to be a political and national problem in 1985. Later on, Prime Minister Sheikh Hasina as well as her government also acknowledged the CHT crisis to be a political problem. This led her to signing the CHT Accord with Parbatya Chattagram Jana Samhati Samiti (PCJSS) in 1997 to resolve the crisis through political and peaceful means. But the question is: ‘How far the political solution to the crisis has earned progress over the last 23 years since signing of the Accord?’ If it is holistically judged without being biased, it can never be claimed that the desired progress has been achieved, even passing almost over almost a quarter of century last.

The special administrative system comprising of CHT Regional Council (CHTRC) and three Hill District Councils (HDCs) to be introduced in CHT, as per provisions of CHT Accord, has been left stranded, today. The subjects, such as, general administration, law & order, police, land & land management, forest & environment, development of communication system, disaster management and NGO activities have not yet been devolved to the CHTRC and HDCs. Let alone holding elections in these Councils as per the Electoral Roll to be prepared only with the permanent residents of CHT. The Deputy Commissioners and Superintendents of Police have been exercising administrative powers side-lining CHTRC and HDCs, as usual. The CHT Development Board, while ignoring supervisory power of the CHTRC, has been implementing the development programs. As all these key issues remain unimplemented as yet, how can political solution to the crisis get resolved?

So far, no basic progress has been made on land disputes that comprises the key concern of CHT crisis. It passed 19 years in formulating the CHT Land Commission Act. After that, the government has kept pending the work of formulating the Rules of the Land Commission for four years. Nobody can say for a certain as to how long it would require more. Land disputes in the hills have not been resolved in the last 23 years. The Jumma people have not got their lands and homesteads back. Of the India returnee refugees alone, 2/3rd of their families have not got back their lands and 40 villages belonged to them are still lying under settlers’ possession. In addition, almost one lakh families of Internally Displaced Persons (IDPs) have not been rehabilitated till date. They have not been returned their own lands as yet.

Let alone solution to the land disputes, the Jumma people are still being evicted and their lands are being occupied on pleas of reserve forest extension, tourism, lease and military installations. In addition, forcible land occupation by settlers under patronization of state machineries continues. If there remains no earth under the feet, how the ‘golden door’ will get opened in the fate of the people concerned? Although 23 years have passed, more than 400 temporary camps are still in force in CHT. Above all, there stands the ‘Operation Uttoron’ that was promulgated ignoring the Accord. All this indicates how far demilitarization in governance system of CHT has got progress.

Where the institutional basis of the special governance system consisting of the CHTRC and the three HDCs has not yet been developed, it is natural not to think of the control and decision-making role of the people’s representative bodies on development. Most of the development programs are bureaucrat-dependent and are being implemented through the CHTDB and administrative organs. Indeed, it can be said without any doubt that the up-down development approach is still in force in the CHT as in the past.

However, it is admissible that some extent of advancement in CHT includes: education, safe drinking water, sanitation & hygiene, infrastructure and socio-economic development, etc. Yet CHT’s development lags far behind comparing to the progress achieved at the national level. At the same time, it is also admissible that the culture and national entity of Jumma people including environment and bio-diversity have not been taken under proper consideration in infrastructure development.

In CHT, the development programs that cannot be holistically regarded as friendly to people culture, pro-people and environment-friendly include: indiscriminate declaration of traditional Jum-lands and mouza-lands as Reserve Forest; thousand acres of lands given in leases to the non-residents; forcible land occupation on plea of tourism, acquisition of vast lands for military purpose, plantation by destroying natural forests, establishment of land ports and construction of roads for the purpose, etc. It is crystal clear that as a result, this sort of developments is pushing the culture and existence of Jumma people speedily to the brink of destruction and also rapidly ruining the balance of environment and bio-diversity.

Even amid COVID-19 pandemic, the atrocities being carried out unabatedly by various non-government tourism and rubber plantation companies include: setting 5 thousand acres of Jumma-owned rubber plantations on fire; threatening to torch the houses if the villagers do not leave their villages; filing up fabricated cases against the Jumma people who are vocal in protecting their lands; destruction of groves belonging to hill people; illegal land occupation by the settlers in different areas, etc.

Alongside amid the Corona crisis, the terrible atrocities being meted out by the security forces include: searching houses, arrest, filing up false cases, killing in crossfire, suppression upon the organizations and individuals engaged in the movement, etc. For the people for whom these developments, the self-governance of these people where is faraway; wherein their security to life and property is uncertain; wherein freedom of speech and freedom of assembly is restricted; wherein human rights are trampled; wherein their culture and existence are endangered; as such, ‘breeze of peace’ can never blow there.

In fact, any political crisis likewise the CHT can never be given a genuine solution by providing only development coating while leaving political solution aside. At this, the problem gets more complicated and it is actually getting so, which cannot be auspicious for greater interest of the country. For proper development and establishment of genuine peace, the proper political and peaceful solution through implementation of the CHT Accord is the first and foremost and the self-governance of the CHT people has to be ensured; it is only under such circumstance, the ‘golden door’ can be opened and the CHT can march as potential region along this path. 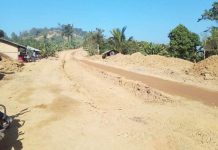