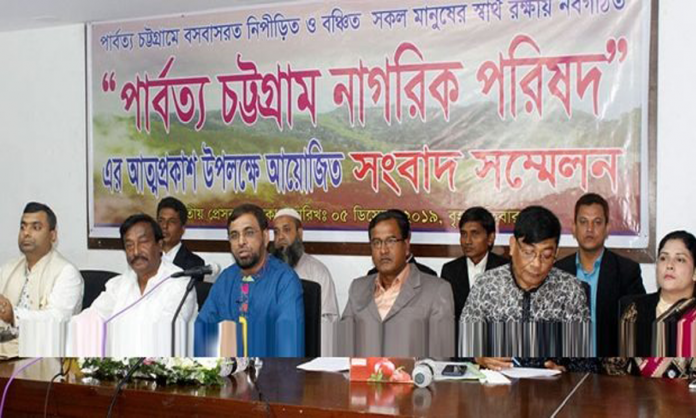 It may be mentioned that in December last year, the Parbatya Chattagram Nagorik Parishad (PCNP) was formed as a single organization of Muslim Bengali settlers with the help of the army and military intelligence agency DGFI by dissolving some ultra-nationalist and ultra-communal organizations of Bengali Muslim settlers.

Atiqur Rahman is currently one of the leaders of the PCNP in Bandarban district. He is the former president of the Islami Chhatra Shibir in the Bandarban Hill District. Atiqur Rahman was arrested on the night of 19 September 2016 from the bus station area of ​​Bandarban town. He was arrested on charges of plotting anti-government sabotage. Atiqur Rahman, who identified himself as the leader of the recently defunct Parbatya Gono Parishad, told police that he was working behind the scenes to implement the mission of the Islami Chhatra Shibir.

Shabbir Ahmed, vice-president of the Central Committee and president of the Rangamati district branch of the PCNP, is associated with many organizations and businesses. He is the Member Secretary of Rangamati Chamber of Commerce and Industry and Office Secretary of the Reserve Market Businessmen Welfare Association. He has established Rangamati International Residential School at Tabalchhari Officers Colony area of ​​Rangamati. ABM Tower Shabbir Ahmed owns a business of textile, Burmese products and cosmetics called Swapna Kutir at Rangamati Reserve Market. He has also opened a printing press called Meheria Digital Printers on the second floor of Shukria Market in Kata Pahar at Banarupa Bazar.

Md. Solaiman is the general secretary of Rangamati district committee of PCNP. He is a journalist. He believes in the philosophy of Jamaat-e-Islami politics. He is the founder of Rangamati Darussalam Islamic Academy. In his student life he was the Rangamati district president of the recently defunct Parbatya Bangali Chhatra Parishad. He is Rangamati correspondent of private TV channel SA TV, editor of CHT Live Online TV and vice-president of Rangamati Reporters Unity.

It is learnt that Md. Ibrahim Khalil was once detained by RAB along with jihadi books. He has written at various times about militant activities and jihadi books. In this way, they are active under the banner of PCNP and continue the work for Jamaat-Shibir.

Moin Uddin was the vice president of the Khagrachhari branch of the Parbatya Bangali Chhatra Parishad. He wrote various online articles about Chittagong Hill Tracts. He is associated with the politics of Chhatra Shibir. Now he is involved with the PCNP. He is again working as the Zonal Manager of Pran and RFL Group.

The organized syndicate is also active in the land grabbing in the hills. They have developed various plantation. It is learnt that they have set up safe base in deep forests in Kaladeba and Sonaiaga areas of Ramgarh upazila in Khagrachari district.

The news item titled ‘Jamaat-Shibir everywhere in camouflage’ published in the Kalerkantho said, “Jamaat-Shibir has taken up a master plan targeting 2028. That year will mark the 50th anniversary of Chhatra Shibir.” With that target in mind, it has come to light that the members of Jamaat-Shibir are carrying out organizational work in disguise by joining the PCNP under the shelter of the ruling Awami League.

A member of the Jamaat’s central assembly, who did not want to be named, said: After making a strong position in these places, a revolution will take place in the country. The leader claimed that the Morsi government had failed because there were no own people in the army despite having 90 percent support for the Brotherhood in Egypt. He said, ‘This incident has opened our eyes. We think it’s a big sign and a lesson for us.’ [Kalerkantho, 27 April 2015].