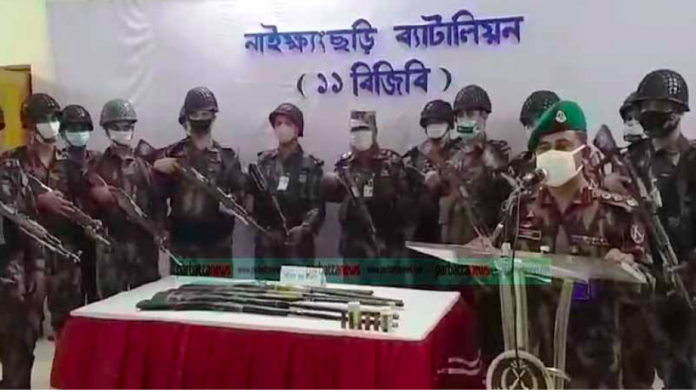 Hill Voice, 8 September 2020, Bandarban: As in the past, Border Guard Bangladesh (BGB) has recently staged massive arms rescue drama in Naikhyongchhari of Bandarban district, in order to gain their promotion and to make the public opinion confused by showing the presence of arms and armed terrorists in the Chittagong Hill Tracts (CHT). The drama of rescuing these weapons has been propagated in various online news portals and national dailies.

According to local sources, on 4 September 2020 Friday, a group of BGB members led by Lt. Colonel Shah Abdul Aziz Ahmed the commander of the 11th battalion in Naikhyongchhari zone, and Assistant Director Mohammad Jamal Hossain raided the Mama-Bhagina Jhiri area of ​​Douchhari Union of Naikhyongchari and recovered five one-barreled country-made guns and one SBBL.

During the raid, BGB patrol team found 4 SBBLs and 1 country-made weapon (single barrel gun), 2 barrels for making weapons, 1 cartridge and empty shell of 5 cartridges without owner. The journalists were informed that the hideouts of the terrorists in the area were destroyed and the arms were rescued.

Lt. Colonel Shah Abdul Aziz Ahmed told reporters that at around 3:00pm on Friday, while preparing to conduct some armed terrorist activities at Chagalkhair area, the BGB patrol team rushed there and after sensing the presence of BGB, the terrorist fled from the place.

On the other hand, today on 8 September 2020 Tuesday, under the leadership of Shah Abdul Aziz Ahmed, Commander of 11 BGB of Naikhyangchhari Zone and Mohammad Jamal Hossain, Assistant Director, an operation was carried out at Ledurmukh area of Douchari Union and 8 country-made one-barreled guns and 1 SBBL bullet were recovered from the place.

11 BGB Commander Lt. Colonel Shah Abdul Aziz Ahmed told reporters that the BGB conducted an operation and recovered the weapons on the basis of secret information. He further said that the terrorists fled after sensing the presence of BGB.

According to local sources, the BGB did not actually recover any weapons during these two days. These country-made weapons have been collected by the BGB from the locals in exchange for money and kept them deposited in the BGB camps and local police stations. Then, these weapons are arranged on the table, pictures are taken and the journalists are called and the incident of recovery of arms is described or the incident of recovery of arms with pictures is sent to the media.

This way, the BGB have been staging a drama to recover weapons. This is a very old drama of BGB. Local sources have confirmed that the BGB have been stagi to recovery drama of a large quantity of arms and ammunition from time to time, starting from AK-47s and motor launchers. At that time, Naikhyongchhari was described by various national dailies as a mine of weapons for the BGB and the army. It’s a sort of drama, like the recent crossfire killing of Major Sinha and the crossfire killing of hundreds of people without trial.

On the condition of anonymity, the local villagers said that the BGB of Bandarban Naikhyongchhari have been staging recovery drama of the weapons in Douchhari Union for many years. BGB commanders and directors make these dramas for the promotion of their jobs.

The villagers also said that due to the frequent threats and intimidation by the BGB, the local Jumma people and Bengali people of Douchhari Union were compelled to deposit country-made guns and ammunitions. And the arm  recovery drams is staged with the help of these country-made guns.

The villagers said that even though the people of the area did not have such guns, they were compelled to collect such kind of weapons and submit them to the BGB authorities to get rid of the harassment by the BGB.

A former public representative said on condition of anonymity that the main purpose behind staging the arms rescue drama by BGB members was to ensure their promotion by showing the success of arms recovery, to criminalize the organizations and individuals enganged in the movement for the rights of Jumma people as terrorists and to obstruct the implementation process of the CHT Accord.