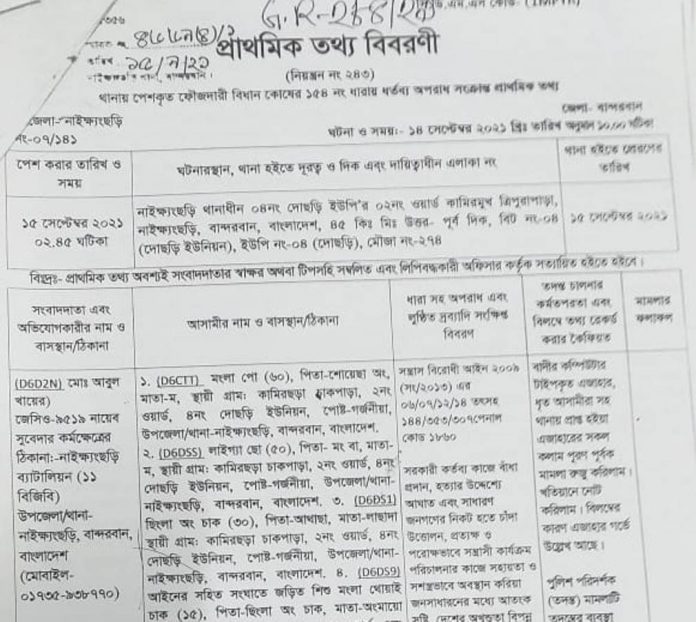 Hill Voice, 18 September 2021, Bandarban: It has been alleged that Border Guard Bangladesh (BGB) has recently filed a false case against 41 innocent indigenous people in Naikhyongchari Upazila under Bandarban Hill District. The case also includes four innocent Jumma villagers who have already been detained and tortured illegally by the army and BGB.

The lawsuit alleges obstruction of official duties, attempt to assault with the intention to murder and extortion from the public, direct and indirect support for the conduct of terrorist activities and the creation of panic among the public by offering armed assistance, endangering the country’s integrity by providing various financial assistance and shelter.

According to the case statement, two members of the BGB patrol team were seriously injured when unidentified armed men along with the 41 Jummas opened fire on the BGB on 01 September 2021 at a hilly road of Kamichara Chak Para during a joint operation of BGB and Army in Kamichara Chak Para of Ward No. 2 of Douchari UP under Naikhyongchhari Police Station.

When contacted, some of the accused Jumma and related family members, who did not want to be named, said it was a conspiracy case by the army and the BGB. The accused are all unarmed and innocent Jumma villagers and some are simply associated with the democratic movement for the implementation of the CHT Accord. There is no question that they are terrorists. They said the BGB’s allegations were completely false and malicious.

The list of victims of false cases is as follows-

It may be mentioned that the accused listed from No. 1 to No. 4 in the case were detained by the Army and BGB members from their respective villages 14 days before the case was filed. After the arrest, the army and BGB members detained them in a completely illegal place without releasing them or handing them over to the court as per the law. After filing the false case, the BGB members handed over the four arrested persons to Naikhyongchari police station and listed them as accused in the case.

Two of the six detainees, namely Uthowai Hla Marma (24), son of Mongdow Marma and Manroom Murung (60), son of late Dhui Thong Murung, were handed over to the police entangling in a false case on 4 September 2021, four days after their inhumane beating and detention. False and fabricated case was filed against them under sections 144, 353, 332, 333 and 307 of the Penal Code.

On the other hand, the remaining 4 people were illegally detained and tortured for 14 days and then handed over to Naikhyongchari police station by the army and BGB on the night of 14 September 2021. They were then implicated in a false case dated 15 September 2021.