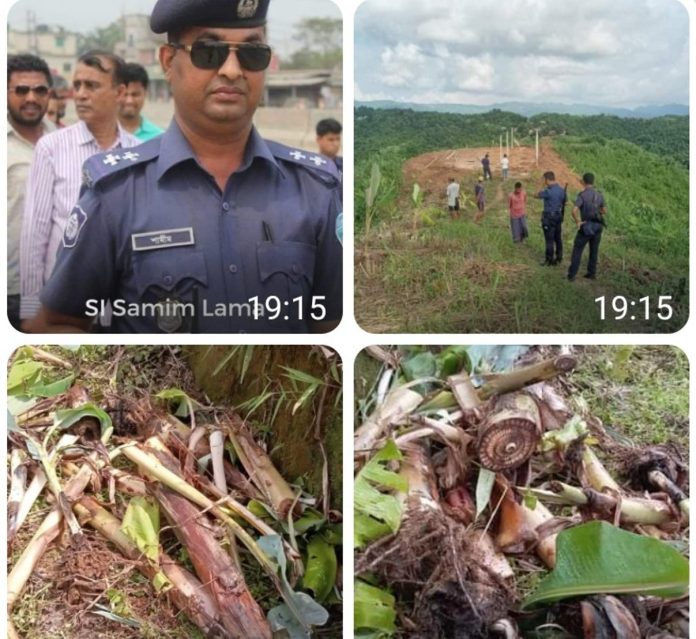 According to local sources, yesterday, on the way home from bazar, Reng Yen Karbari saw that the banana trees of Rengyoung Mro’s banana plantation were cut. On hearing the news, Rengyoung Mro rushed to his plantation on Monday morning.

Victim Rengyoung Mro said about 40 workers of rubber company cut down all the banana trees in his plantation. Basically, the rubber companies are doing such abominable acts to evict them. He said that the administration is not cooperating with them for justice.

At that time, SI Shamim ordered the villagers engaged in the school construction work to stop the construction work. At a state, he threatened by saying that to build a school here, the approval of the OC of the police station must be taken.

Not afraid of the police threat, the villagers started the construction of the school from Monday morning. Some volunteers involved in the construction work said that the administration and the rubber company are conspiring to take away our rights and despite this conspiracy, no one can deprive the students of our three villages of their right to education. We will leave after building the school.

The lives of the indigenous peoples of three villages of Sarai Union of Lama are in dire straits in the face of encroachment of land by land grabbers. Sometimes burning the land, sometimes poisoning the spring water, sometimes filing false cases by land-grabbing rubber companies, sometimes cutting banana trees, sometimes attacking land rights activists, obstructing and vandalizing the construction of Buddhist temples, and finally obstructing the construction of schools and villagers’ banana plantations with the help of the police, etc. are being carried out one after another.

This is how the villagers are being attacked one after another, lawsuits, heinous acts. CHT Minister Bir Bahadur, the local administration, the police, the army, instead of protecting the land rights of the indigenous Mro and Tripura villagers, have been playing a role in favor of land-grabbing rubber companies. While the rubber companies get a lease of 25 acres of land per plot, they occupy hundreds of acres of land with the help of the local administration in the name of lease.